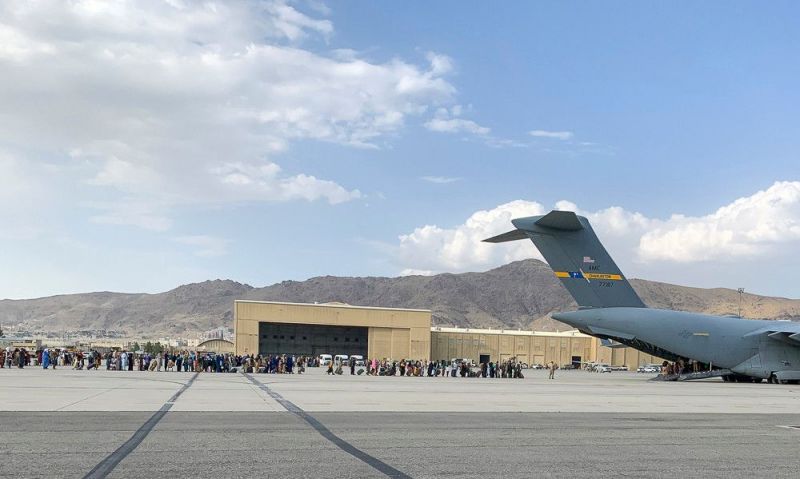 The American Legion joined forces with a coalition of 24 veterans service organizations (VSOs) calling on Congress to pass legislation that would allow Afghan humanitarian parolees who are being evacuated from Afghanistan to have an opportunity to seek lawful permanent residence in the United States.

Advocates are calling for the bipartisan Afghan Adjustment Act to be included in the upcoming FY2023 Continuing Resolution. Contact your members of Congress and urge them to pass this critical legislation.

In a letter to Senate and House leadership, the VSOs highlighted the promises made to the Afghan allies who served alongside U.S. forces during two decades of war, calling it a “sacred obligation.”

“We have a code in the U.S. military, ‘no one left behind,’ reads the letter. “For two decades, we fought shoulder-to-shoulder with brave Afghan allies who served with and protected American forces, fighting for the freedom of Afghanistan and its people.

“Last year, when the Taliban forces seized control of the country, our Afghan allies faced and continue to face persecution for having stood by us. Many of us made personal commitments to our allies, and we believe that the United States has a sacred obligation to the people of Afghanistan. We must honor the promises we made as a nation and are duty-bound to fulfill.”

The legislation could provide the approximately 76,000 Afghan evacuees in the U.S. with a pathway to permanent residency. Many are eligible for asylum or special immigrant visas (SIV) due to the critical assistance they provided to the U.S. during 20 years of war in Afghanistan.

Those currently admitted into the U.S. under temporary humanitarian parole have protection for a maximum of two years. They are quickly running out of time — protections will expire as early as August 2023.

Despite being eligible for these programs, their futures remain uncertain. Both the SIV and asylum processes are faced with steep backlogs and logistical issues, as well as concerns regarding the vetting process, have been raised by some critics of the effort. Many more — such as Female Tactical Platoon Members, Afghan Special Forces who served in joint U.S. missions, and Afghan Air Force pilots who left their families behind to fly U.S. military aircraft out of Afghanistan so they didn’t fall into the hands of the Taliban — are ineligible for an SIV.  Despite these concerns, polling data on the Afghan Adjustment Act show nearly 70% of Americans support taking in Afghans fleeing the increasingly devolving security situation in their homeland.

For the majority of Americans who support the Afghan Adjustment Act, most believe that the U.S. has a duty to help U.S.-affiliated Afghans and that they deserve permanent residency in the U.S. because they risked their own lives and those of their families to assist U.S. forces during the war. By providing these humanitarian parolees with permanent residency, it would also provide them with a path towards U.S. citizenship.

When presented with information about the support the legislation has from prominent veterans organizations like The American Legion, public approval for the Afghan Adjustment Act increases by 17 percentage points. Additionally, public support increases by 16 percentage points when people are informed about the robust security measures being taken in vetting the Afghans who are admitted into the U.S.

All Afghans who seek to apply for adjustment must undergo additional security vetting — with requirements equivalent to those used in the U.S. Refugee Admissions Program — including an in-person interview. Those Afghans who do not meet the qualifications must also participate in a joint vetting database between the Departments of Defense and Homeland Security. There is no other congressional action that will ensure this additional layer of vetting.

“We must honor the promises we made as a nation and are duty-bound to fulfill,” the VSOs continued in their letter to congressional leadership. “Failure to do so already calls into question this nation’s ability to adhere to our code and our values.

“We must provide genuine and lasting protection to the Afghans who have made it safely to the United States and to those who have been left behind. The longer we go without meeting this promise, the more our moral injuries fester.”

Currently, veterans are standing beside their Afghan allies on Capitol Hill in a fire watch vigil to highlight the legislation they believe will save the lives of those targeted for retaliation by the Taliban for their service alongside American forces. If Congress fails to include the act in the continuing resolution, The American Legion and the VSO community will work tirelessly to get the Afghan Adjustment Act passed this Congress.

“We promised to stand by our allies, those who served in uniform and those who we championed to publicly defend women’s and democratic rights, often at risk to themselves and their families,” the coalition wrote. “The U.S. government made that promise as well and keeping it assures that the American handshake still means something. A promise on which, like us, the next generation of military service members lives will rely.”