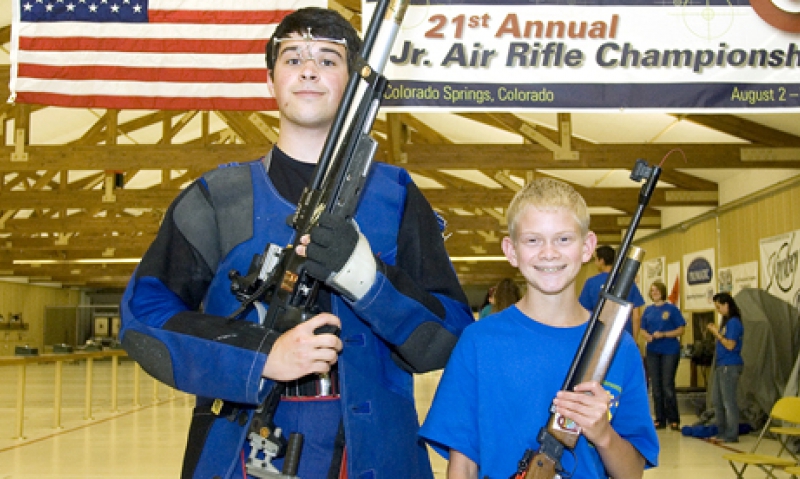 On Aug. 6, The American Legion's Junior Air Rifle National Championship got under way with a shoot-off between two precision category competitors, the first time in the competitions 21 years. Afterward, the sporter category top eight competitors stood alongside each other with air rifles in hand for their first 10 shots.

It was a tight 10-shot sporter match between Mitchell Van Patten from Meridian, Idaho, and Renz Ibarra from Zion, Ill. But in the end, Van Patten claimed the sporter championship title by a mere two points, firing a 2295.9 out of a possible 2509.

"During the competition I try to tell myself to relax, and my favorite position is the one that I shoot," Van Patten said. "My future plans are to make it to the Olympic Development Team and then on to the Olympics. And after all of that, I want to win the Olympics."

Mitchell's coach is his father, Brent, who says even if Mitchell wasn't his son, he would still love to be his coach because of his dedication.

"Being his father and coach is sometimes very prideful and joyful and other times it can be frustrating. It's an interesting balance," Brent said. "But he is a teachable, coachable person who has lofty goals and he works hard to meet them. Besides natural talent and hard work, he is focused and has a lot of self discipline. And one thing I'm really impressed with is he comes back from adversity."

The top eight precision competitors followed in the footsteps of the sporter competitors, standing side-by-side and firing 10 shots. With a five-point lead, Daniel Lowe from Olympia, Wash., claimed the precision champion title with a 2454.7 out of a possible 2509.

"My confidence comes from a close friend who gives me a motivational speech," Lowe said. "He tells me what I can do because sometimes I doubt myself and begin to think I will do badly. So my friend always looks me straight in the eyes and tells me to do my best and be all I can be."

Click here to see the championship results amongst the 16 finalist.