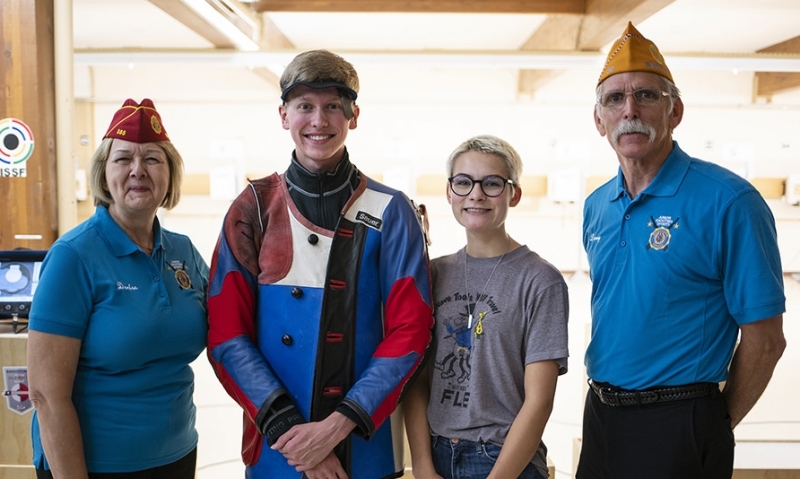 As first-time competitors of The American Legion’s Junior 3-Position Air Rifle National Championship, precision shooter Jared Eddy and sporter shooter Bailey Hoenig won first place during Saturday’s final round. Both shooters held on to their No. 1 position as they approached the firing line, standing shoulder-to-shoulder with seven other finalists in their respective category to shoot 10 shots in the standing position at the Olympic Training Center’s USA Shooting range in Colorado Springs, Colo.

Hoenig shot a standing sporter final of 93.7, with a final aggregate score of 2,314. She immediately called her mom following her win. “(My mom) started crying, which made me cry. It’s emotional,” Hoenig said. The win for the 17-year-old air rifle shooter for Zion (Ill.) Benton High School NJRTOC was a first as an individual air rifle competitor. It showed her that “I know now that I can do it.”

Hoenig said she practices air rifle shooting alongside her teammates every day for 11 months a year. This win was for all of them.

“My peers, my team members, I want to do well for them too,” Hoenig said. “Thank you so much to The American Legion because it means a lot. I was almost not able to come (due to family reasons), but they helped make it possible.”

Eddy and No. 2 position Taylor Gibson were in a tight battle, but Eddy was able to hold on to his No. 1 position to claim the precision championship title. But it was not without high nerves.

“Coming here and being top 15 (in the precision category), it’s very stressful. I was shaking the entire match,” said the 17-year-old Eddy of Midland, Ga., who shoots for Ole Mill Rangers and is heading to West Virginia University. “But I still managed to shoot good shots and follow my shot process well.”

Eddy shot a final aggregate score of 2,475. He’s been shooting air rifle for four years and will compete in college. Eddy enjoys the sport because “it’s very challenging. Every miniscule detail counts and it can lead you to a better score, a higher match, a personal best. The amount of time you have to put in just to increase points is inane but I like that challenge,” he said.

Gibson of Salem, Ore., finished with an aggregate score of 2,473, yet still holds The American Legion’s record for a precision final score of 104.7, which she reached in 2016 along with the precision win.

“I have loved this competition both times that I’ve been. I’ve made some really great friends here; every other competition I go to you don’t have the chance to make friends,” Gibson said. “I feel really lucky that I’ve been able to come here twice, meet cool people, and just be involved in it.”

The following are the final results: