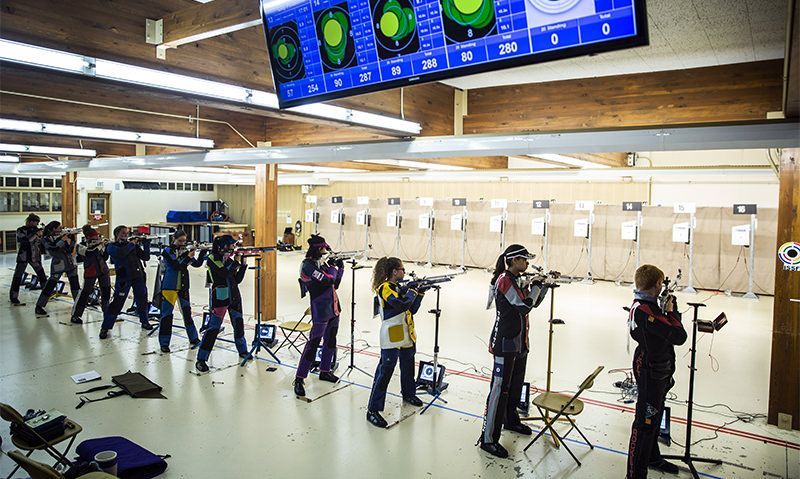 Thirty young air rifle competitors from across the country came together to stand on the firing line inside the USA Shooting range at the Olympic Training Center in Colorado Springs, Colo., with the same goal in mind: to win The American Legion’s air rifle competition in their respective category. The top eight marksmen in both categories were named following Friday’s competition and will compete in the final round of the 29th annual American Legion Junior 3-Position Air Rifle National Championship on July 27 at 9 a.m. Mountain Time.

Follow along here where the eight competitors in each category will fire 10 shots in the standing position.

Sixteen-year-old Scott Rockett of Cary, N.C., is leading the precision category by a single shot heading into the finals – a lead he took Friday afternoon. Prior to firing down range in the standing position, Makenzie Sheffield of Texas was leading.

Rockett has been shooting for about seven years. His mom brought him to a gun range where they had a junior club and his first air rifle shot he hit black. “They said, ‘This kid’s got to keep going.’ What I love about shooting air rifle is that it’s so complicated but so simple and that’s the beauty of it.”

Jaden-Ann Fraser of Church Hill, Tenn., holds first place in the sporter category for Saturday’s finals with a four-point lead. This is the farthest she has traveled for air rifle and so far it’s been “a complete mix of beyond fun and stressful! (Stressful) because all these shooters here are so talented so you know you’re up against some good competitors,” she said. Aside from the stress, “it’s been so much fun getting to meet other kids from across the states that have the same passion for shooting.”

Fraser’s love for the sport of shooting air rifle started three years ago when she liked what it gave her that other sports didn’t – self-accountability.

“You have basketball and you have volleyball and those are all great sports where you have to rely on everybody else. With shooting, individually, you just have to rely on you and what you can bring to the table. I like that there’s an accountability factor in that,” she said. “How good you do is just about how much you put forward.”

Fraser is heading into her senior year of high school and will be moving to precision shooting with hopes of making it back to Colorado for The American Legion's air rifle championship.

The 30 competitors, 15 in each category, have been shooting since Thursday in the USA Shooting range, taking aim in the prone, standing and kneeling position twice a day. The competitors qualified for the Legion’s air rifle national competition after advancing through the individual postal match competition that involved more than 1,500 other youth marksmen.

Several American Legion Family leaders showed support to the competitors by sitting behind the firing line and watching. They included American Legion National Commander Brett Reistad, Sons of The American Legion National Commander Greg “Doc” Gibbs, Auxiliary National Vice President Nicole Clapp and Americanism Chairman Richard Anderson. Reistad said he’s familiar with the Legion’s air rifle program as he has watched competitors compete within his Department of Virginia. However, it was his first time to attend the championship in Colorado where he was “amazed at the level of concentration of these contestants. It’s quite an experience,” he said.

As a new volunteer with the Legion’s air rifle championship, Past National Commander Charles Schmidt is getting to see a different side of the program than when he visited during his time as commander in 2017.

“I get to see more of the mechanics of them shooting in each position, which is pretty interesting. As national commander I didn’t know what all the program entails and seeing is believing. And learning as well,” Schmidt said. “Legionnaires ought to be proud of these kids. And as Legionnaires we have the responsibility to build an opportunity (by educating about the Legion’s air rifle program). It teaches (youth) self-discipline, builds confidence up.”

Self-discipline and confidence is what shooting gave precision shooter Nina Schuett of Billings, Mont., who is in fourth place heading into Saturday’s finals. Prior to competing in the sport three years ago, “I was OK at school, I was OK at certain stuff but once I got into shooting I just became more passionate about everything I did. I wanted to work harder in everything I did so I improved my grades, I started being more outgoing, it just lead me to be a better person all around. So I’m more dedicated to everything I do,” Schuett said.

Dedication is what keeps Schuett driving two and a half hours once a month to shoot with her team, the Gallatin Valley Sharp Shooters. Other than that monthly visit, she shoots in her garage. When Schuett came off the firing line after her final shot in the standing position, excitement filled her face and she immediately hugged and congratulated competitor Morgan Frank. Schuett had just shot a personal best.

“I’ve done other sports. I’ve done basketball, volleyball, swimming and this sport is so unique and it’s so different," Schuett said. "Everyone here just cares so much about each other. I don’t think it’s really necessary about winning, I mean we all want to win, but it’s more about the memories you have together and the people you meet.”

The following are the top eight finalists in each category along with their aggregate score.