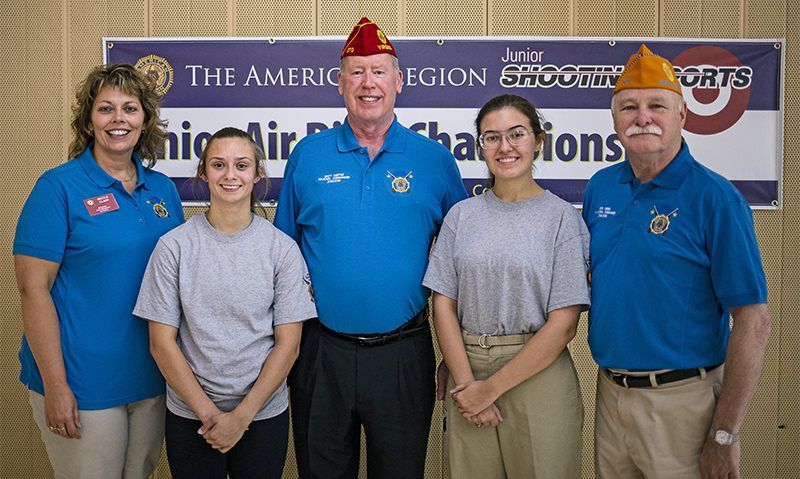 The American Legion’s 29th annual Junior 3-Position Air Rifle Championship named its precision and sporter champion following Saturday morning’s final round of 10-shots in standing position inside the USA Shooting range at the Olympic Training Center in Colorado Springs, Colo. Precision champion Makenzie Sheffield of Granbury, Texas, moved from second position to first after the seventh shot, while sporter champion Jaden-Ann Fraser of Church Hill, Tenn., held on to her lead position heading into the final round.

Scott Rockett of North Carolina was ahead of Sheffield by one point as the top eight precision finalists lined up on the firing line. He held that position until the seventh shot when Makenzie fired a 10.5 out of 10.9, took the lead and didn’t let go for her final three shots. Sheffield walked off the line with a standing final score of 103.2 and embraced her mom in tears.

Tears came from winning and because “it’s my last high school match,” said Sheffield, who will be shooting for and attending North Carolina State this fall. “You work so hard for it, family is behind you, coaches. Just grateful for everyone that’s helped me to get here.”

She has been practicing in The American Legion’s air rifle postal match for the past few years, but this was Sheffield’s first time making it the national competition in Colorado. Her high school shooting practice of three hours a day for five days a week paid off during the Legion’s competition, as she had “a lot of personal records this week. When I found out I was coming here I said (winning) is my goal, I’m doing to do whatever I can to achieve it. I’ve had a lot of fun and made a lot of great friends.”

Sheffield started air rifle shooting with 4-H after someone shared with her mother, Stephanie, that she had natural talent. “So we just pursued it; and she loves it,” Stephanie said. “It’s been such a joy to watch her thrive and grow in this sport and do so well.”

When Fraser put down her air rifle gun following the top eight sporter finalists’10 shots, she sighed with relief. “Whew. I’m done,” she said. And then Fraser immediately turned to Kayla Kalenza and they hugged. Afterward, it was announced that Fraser had won with a standing final score of 86.9.

“Oh my gosh that took everything out of me! That last shot I was about to pass out. I just tried to do my best. It worked out, I’m very pleased and I had support from these phenomenal competitors so any way it went it would have been good,” Fraser said. “I’m very happy right now. This has to be the most amazing competition I’ve ever been to. And this is probably my best rifle experience so far.”

Fraser had the support of her mother as her coach, Chief Norman Greear at Volunteer High School NJROTC in Church Hill, Tenn., couldn’t make it due to other obligations.

“There’s no way I could have done this without his coaching,” Fraser said. “I feel like he trained me specifically for this competition, and I couldn’t be more thankful to have a coach like him.”

A $1,000 scholarship, provided by the American Legion Auxiliary, was awarded to the second-place finishers in each category – precision competitor Scott Rockett and sporter competitor Kayla Kalenza.

With 10.9 being the highest shot, which is smaller than the size of a period, precision competitor Lilly Polakovic made two of them during the final round. “I think it was luck,” she said. “In the beginning I was just kind of shooting and was getting tired so I started over holding a little bit. I was surprised because I wasn’t really expecting (to hit a 10.9)!”

The following are the top eight competitors in each category along with their standing final score and overall aggregate score.