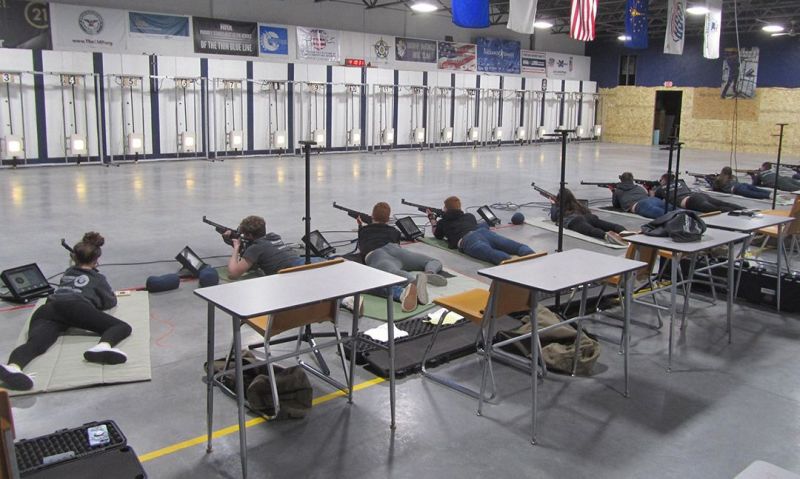 But that’s not all.

Post 173’s youth participants secured their state championship title for the second year and broke their 2019 state scoring record by 61 points for a new state record of 2225.

“I tell the kids the reason you’re good is because we’re a team,” said Coach Jerry Hewitt, a life member of Post 173. “Assistant Coach Steve (Scoggins) and I could not be more proud of these young men and women.”

Post 173’s shooting sports program is fairly new – started in 2015 – yet, for the past two years they have won every air rifle championship in Indiana for the sporter class. “People can’t believe how well we’ve done in such a short amount of time,” Hewitt said. He credits support from community members and businesses that helped get the shooting sports program running, the parents and the program’s youth participants.

“We have such good support from our parents – they are our most valuable player,” Hewitt said.

The program’s nine youth marksmen all shoot in the sporter class for 3-position: prone, standing and kneeling. They practice on Monday’s inside the education building at the National Muzzle Loading Rifle Association in the nearby town Friendship.

As the air rifle program’s coaches, both Hewitt and Scoggins have experience in the field from their military service. Hewitt, a Vietnam War era veteran, was on the U.S. Army’s brim grade rifle team. And Scoggins, a Post 173 life member, worked at a firing range during his time in the Marine Corps. Another big help and supporter of Post 173’s Junior Shooting Sports Program is Bill Jordan with ISRPA. Hewitt said Jordan has helped the young shooters with position and aim skills, and provided coaching knowledge to Hewitt and Scoggins. “He taught us and the kids the right way to do it. He is our secret sauce,” Hewitt said.

As Post 173’s air rifle team travels around the state to compete, the competitors are wearing gear with The American Legion and Post 173 shooting sports emblem on it. “People are starting to know where Versailles American Legion is now because of them,” Hewitt said. “I couldn’t ask for better kids.”