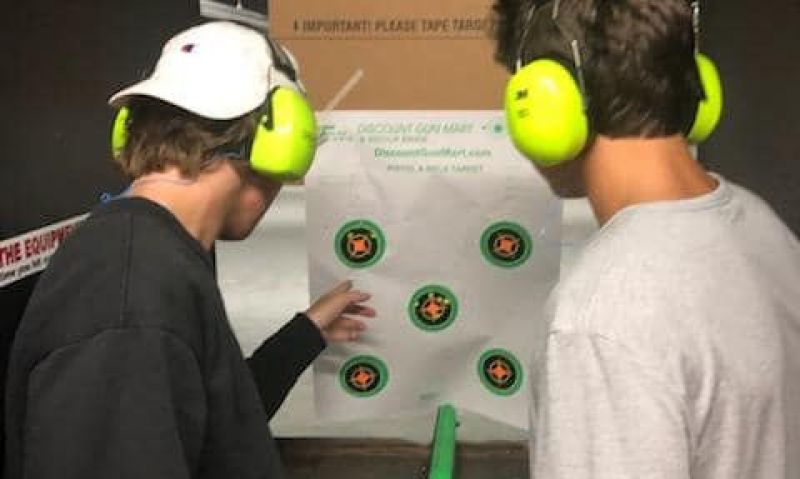 Michael Hall and Keegan Leonard have hopes of attending a military service academy following graduation in 2021 from La Jolla High School in San Diego. The two young men have been running together three to four times a week in the evening as a way to prepare of the candidate fitness assessment. So when Michael saw the 100 Miles for Hope Challenge set forth by American Legion National Commander James W. “Bill” Oxford, he knew there were two opportunities at hand – run 100 miles for the military assessment and raise money for California American Legion District 22’s new Junior Shooting Sports Program, of which, the young men are participants.

“We saw the 100 Mile challenge and thought it was a perfect way to raise money for the shooting program, which needed funding, and just to continue to do what we do with running,” said Michael, an Eagle Scout, Oratorical Contest participant and California Boy State delegate for 2020, which was canceled due to the pandemic. Michael and Keegan wrote a letter about their fundraising challenge and sent it to family members, Legionnaires and others.

With about 25 miles to go in the challenge, they have raised $1,300 – enough for the purchase of two air rifles.

“Both Michael and Keegan are aspiring for a career in the military and this is why the (new American Legion’s) rifle program means something to them,” said Francis Hall, Michael’s father and a member of Larry Holmberg American Legion Post 731 in Linda Vista, Calif. The air rifle program, which is housed within Post 731 but involves all of District 22, just got underway this past spring after being dormant for years, just like American Legion Baseball.

Members of Post 731 connected with other American Legion post Shooting Sports programs for guidance, including Post 209 in Colorado Springs, Colo., site of the Legion’s National Junior 3-Position Air Rifle competition annually in July. “We want to send some competitors from California to the national competition,” said Chuck Camarato, District 22 commander and a range instructor at Post 731 for the youth marksmen. “We are in the growing stages of this program, and what I think is amazing is in the last six months since we actually started our very first shoot is how fast it’s growing and taking off.”

Thirteen youth representing four American Legion posts in District 22 participate in the air rifle program. “We decided to sponsor it as a District 22 program out of San Diego so we can afford the opportunity to other posts who want a (air rifle) program but don’t have the funds,” Chuck said.

Francis added that “everyone’s biggest hurdle is not going to be the desire to start a program, it’s going to be getting the funding to start a program. That’s why I think the 100 mile challenge, support of the Auxiliary who gave us $1,000, and the support from the post (731) just to get it going is the biggest component in the success.”

Post 731 Adjutant Nikolai Camarato helped build the mobile shooting range inside Post 731; targets are set up and taken down for storage. With about eight firing lanes, Nikolai and Chuck serve as range instructors, along with Bill Moss, a Post 731 member and a certified NRA firearms instructor who serves as the master range instructor.

“When we started the first time you could see the deer in headlights, they (youth marksmen) didn’t know what we were talking about,” Nikolai said. They soon caught on. “They got the terminology we were using, they were learning the components of the weapon itself, the rifle – what was going on with it and how to use it.”

Both Nikolai and Francis said a No. 1 focus with the air rifle program is safety.

“The instruction that these young men and women get is top-notch,” Francis said. “I would like to commend the people that volunteer their time like Chuck and Nikolai, and our other range instructor Bill, because not only are they going to the range in the Legion hall, but the instruction these kids get in firearm safety, responsibility and awareness is really above and beyond what everybody expects.

“For the parents that let their kids go into this program come away with an awareness that this isn’t something dangerous … it’s participating in a sport in a safe manner that’s teaching one to concentrate, really hone their skill in a safe environment.”

It’s the teaching of how to be “familiar with firearms, how to shoot them and not be afraid” is one of the many reasons Michael likes the sport. His father agreed, adding, “I think part of the reason why kids lose the fear is because the safety and the instruction that we’re building into the program.”

Chuck said three other districts in Southern California are wanting to start a Junior Shooting Sports Program after District 22’s. “We are still learning as we go. But I think one of the great things is that we’ve got some really, really bright youth that are involved and really want to be a part of this.”