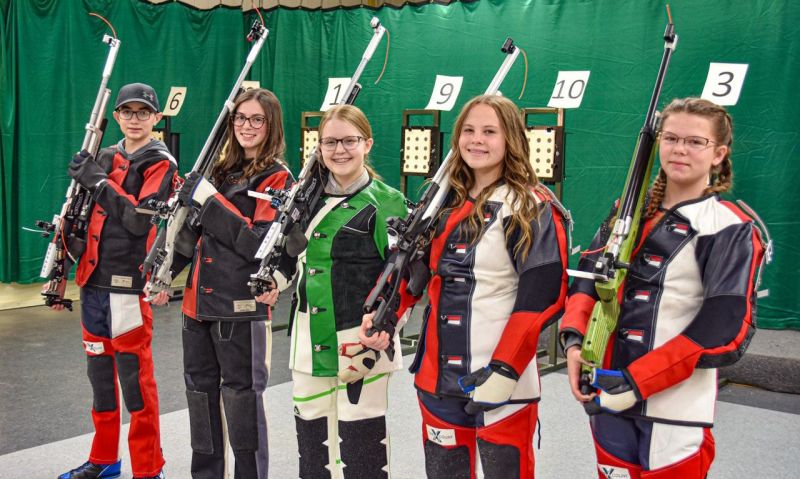 In the backyard of their home in Green Springs, Ohio, Matthew Muzik coached his daughter, Claudia Muzik, in air rifle shooting. Their competitive team consisted of just the two of them, with Claudia having her father’s full attention as a coach. However, prior to this, Claudia competed with a 4-H club at Camp Perry in Ohio until it dissolved several years ago.

She was ready for that team sport once again. And to share with other youth what the sport has to offer.

“I really want a team. I really want to start a team,” Claudia told her father. In agreement, Matthew – a National Rifle Association certified coach and post-9/11 U.S. Marine Corps veteran – contacted local schools to gauge interest to no avail. Then his neighbor came forward.

The Frankart family, who are farmers that live behind the Muziks, said, “Hey, we really believe in what you’re doing. If you need a place to teach gun safety and marksmanship skills, you are more than welcome to use our barn.”

In July 2020, Matthew started a youth marksmanship team inside the barn.

To help get the team outfitted in air rifle equipment, Matthew raised funds by raffling off three of his personal guns. Then the youth marksmen shot for about five months inside the barn until “word got out and I had a flux of kids wanting to try out,” Matthew said. “We started to grow really fast.”

The growth created a need for more space to practice and compete. Matthew knew The American Legion had a shooting sports program, so he reached out to the local American Legion Post 295 to ask if they would be interested having a team. Not a Legionnaire at the time or originally from the community, “They voted us (the team) in with open arms,” Matthew said. “To trust me … to bring me in and give me a chance … words can’t describe how supportive they (Post 295) have been.”

In September 2020, The American Legion Post 295 Marksmanship Team became official. The team of 13 marksmen, ranging in age from 8 to 15 from five school districts, shoot inside the post hall.

“It would be impossible for us to do this at another facility and have to pay rent and utilities. We don’t have to pay for anything here,” said Matthew, now a member of Post 295.

The cost of building a shooting sports teams has been made possible with a community of support. Green Springs “is not a very wealthy community. Most of the kids would probably never be able to afford this gear. The X Count (shooting range) in Fort Wayne, Ind., have been my angels in disguise.”

The X Count provided brand new sporter rifles, coats, shoes, pants, scopes and more, and connected Matthew to the Youth Shooting Sports Alliance, who donated five precision rifles. And Matthew designed a bullet trap for indoors at the Legion hall and asked a local fabrication company if they could make one after he designed it and at what cost. “They made 12 bullet traps for us as a donation to our team. I’ve raised probably close to $40,000 in gear. Those kids who didn’t have any gear are now fully outfitted.”

The top 200 male and 200 female shooting sport athletes under the age of 21 in the United States make the Junior Olympics each year. “This is extremely hard to make and takes a lot of practice,” Matthew said. His athletes were up to the challenge. “These kids just really wanted to make Junior Olympics.”

To get ready for the 2021 Junior Olympics in July for air rifle, the Post 295 precision team of eight athletes practiced at the post hall four days a week for two months leading up to the trials. On Feb. 27, the precision team traveled to Fort Wayne, Ind., for the Junior Olympic trials.

Five precision shooters of American Legion Post 295 Marksmanship Team qualified for the Junior Olympics in air rifle. It is Claudia’s third time qualifying but the first for the other four.

Matthew said the precision athletes who came to the extra practices he held during the week to train for the Junior Olympic trials are the ones who made it. “I think that right there made (the others) wake up and say, ‘Maybe if I would have went to this extra practices, maybe if I would have put a little more hard work in I might have made it too.’ It’s good sometimes when you don’t make things because it drives you to that next level of this isn’t as easy as I thought it was. I have to put in hard work. That’s where you have to be if you want to make this level. It’s not easy.

“This sport is not for the weak of heart, as it will challenge you physically and mentally. However, it develops such amazing metal focus witch transfers to better grades in school.”

Before youth can shoot for The American Legion Post 295 Marksmanship Team, they must take and pass a marksmanship safety test. This is in Matthew’s team bylaws along with his safety policy.

“I’m probably one of the most strict people when it comes to safety – I have a zero percent (tolerance) policy,” he said. “If they violate it, they are off my team. They’re very cognizant, they’re very careful of what they do (with their air rifle) because they understand that if they mess up – even if they are a good shooter or might be the best on my team – that’s it. They’re done. That’s the program I want to run. I think because I am so strict on those kind of things, it’s built my success path with these kids.”

Matthew’s success as a coach of The American Legion Post 295 Marksmanship Team has spread, and he has a waiting list of about 100 kids to be on the team. “It’s overwhelming the amount of people that want to be a part of this,” he said.

Claudia Muzik has been shooting air rifle since 2013 and smallbore since 2018. She has competed in over 152 matches.

Deitrich Bergman has been shooting air rifle since 2017 and smallbore since 2019. He has competed in over 60 matches.

Hailey Singleton has been shooting air rifle since 2019 and smallbore since 2021. She has competed in over 21 matches.

Rebeca Pendleton has been shooting air rifle since 2020. She has competed in over seven matches.

Kasey Metz has been shooting air rifle since 2020. She has competed in over seven.

Allyssa Metz received the highest score in the sporter discipline for Ohio and is the state champion for The American Legion Junior Shooting Sports National Postal Tournament. Allyssa has been shooting air rifle since July 2020; she has competed in five matches.

The American Legion Post 295 sporter team of five athletes received the highest score in the sporter discipline for the State of Ohio and is the team state champion for The American Legion Junior Shooting Sports National Postal Tournament.