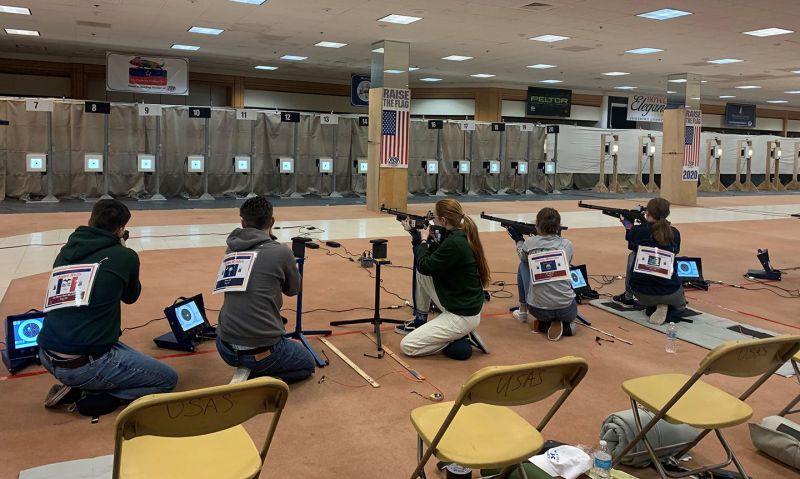 Ayden Wells of North High School Marine Corps JROTC in Des Moines, Iowa, is thankful he “was given a second chance” to come back and compete in The American Legion’s air rifle competition as a sporter shooter since “some people didn’t have that second chance to come back and that’s kind of sad.”

Wells has been competing in the sport for four years as he likes the competitive side of it, and next month he leaves for Marine Corps basic training. He joined the military because “my grandfather served in World War II so that was my big inspiration.” He too has been inspired by other family members who have served, as well as friends of his fathers. Plus, it’s been “something I always wanted to do since I was little. I’m excited to meet new people and see the rest of the world.”

For Jeremiah Vonzell of Zion Benton NJROTC in Wadsworth, Ill., The American Legion’s competition is his last shooting sporter rifle because he graduated high school this year. “So I’m trying to make my last competition as best as possible,” he said. Vonzell, who has been shooting air rifle for four years, was supposed to compete last year in the Legion’s tournament and is “glad I qualified again but I feel upset for those who had the bad day and couldn’t make it back again. One of our teammates couldn’t make it (back).”

Vonzell enjoys the air rifle sport because “everyone’s friendly and I like that very much. You’re going against each other but it’s still a friendly competition. I just love that about air rifle.”

“I’m blown away by the intensity, the concentration, the discipline that these young folks have. It’s amazing,” Oxford said. “The commitment … it’s impressive. They were deprived of last year and they are just happy to be able to come out and compete, stand shoulder to shoulder.”

Clapp is thankful for the ability to show the competitors that the Legion Family is here to support them. “I really feel that having the opportunity for the shooters to come to Colorado Springs, to know all their hard work has paid off for an opportunity that they worked years for,” Clapp said. The cancellation of the program last year was “such a disappointment, but we’re working through the pandemic and it may not be ideal situations and circumstances, but for the competitors to know that we’re committed to the program, that the American Legion Family is … and we’re here, we’re here to support them and where they want to be, and their hopes and dreams, and that hopefully we can help fulfill those.”

Sixteen-year-old Nicolette Hoffman of Dakota Sharpshooters in Armour, S.D.; is finishing her sixth season shooting precision rifle. She too was set to attend the Legion’s competition in Colorado Springs last year and is “thankful to The American Legion for making it possible” for the program to proceed this year. “I’m always excited for the opportunity to compete but also look forward to meet and get to know my fellow competitors. Precision shooting has been one of the best experiences of my life, and I am extremely blessed and thankful for the opportunity to be part of this sport.

“My goal for this competition is to meet new people, try my honest best, positively represent my sport, and have fun.”

For the live targets, after opening the web link click Civilian Marksmanship Program – CMP Mobile Range. The list of competitors will populate. Click the box to the left of the competitor(s) you want to view. Then click on the checkmark at the top right hand corner inside the blue box. Targets will populate.