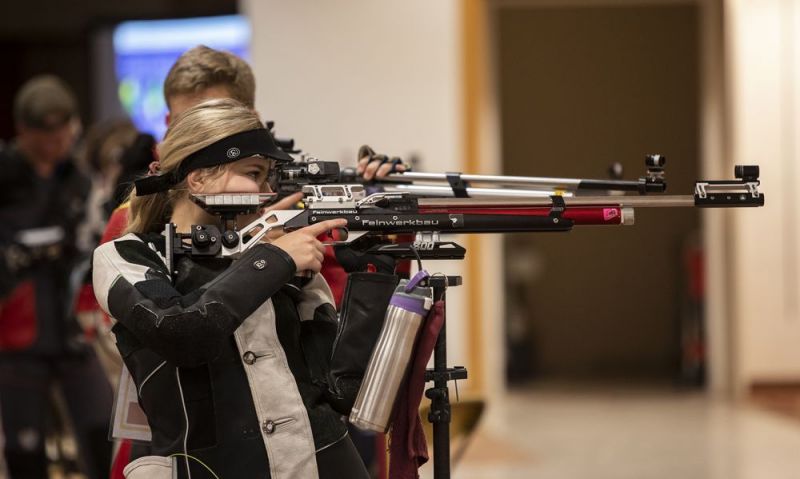 After firing 240 shots each in three positions over the course of two days, 16 of the 30 youth marksmen competing in The American Legion’s Junior 3-Position Air Rifle National Championship are advancing to the final round. The top eight in both the precision and sporter category will fire 10 shots in the standing position on Saturday, July 24, at 9 a.m. Mountain Time for a chance to be named the national champion in their respective category.

Between Thursday and Friday, 15 competitors in both the precision and sporter category shot 20 shots twice for each of the three positions – prone, standing and kneeling – inside an old Macy's building in Colorado Springs, Colo. “This competition is definitely a marathon,” said Maya Cameron, a sporter shooter for Nation Ford High School MCJROTC in Fort Mill, S.C. “I’ve never been this tired after shooting. But I like this back-to-back shooting because if I don’t do well in the first round or if I do, I still have another round.”

Cameron heads into the finals in first place for the sporter category where she will be standing shoulder-to-shoulder with three of her Nation Ford MCJROTC teammates.

Col. Sean Mulcahy, coach of the Nation Ford MCJROTC, is not surprised by the performance of his four athletes who all made the top eight in sporter. “Their effort, dedication and commitment to their sport has paid off,” he said by phone. “So when I heard all four were in the finals I wasn’t so surprised. They have earned everything that they’ve achieved; it’s not by luck it’s by hard work, dedication. They are a joy to coach."

For Cameron, the rising high school senior has been shooting air rifle for three years now and practices before and after school. “It’s a lot of practice but it definitely pays off,” she said. “I put a lot of hard work into it, and I’m glad what I get out of it.” It’s both the team and individual aspects of the sport that Cameron enjoys. “You can compete as a team, but I can rely on myself and put extra work in if I want to.”

In tomorrow's finals, Cameron has an 18-point lead over second place competitor and teammate Kayla Kalenza. The following are the top eight finalists in sporter and their aggregate score.

Mulcahy wishes his athletes the best in the finals and that “they are satisfied with their performance. Not so much their scores but their performance,” he said, which is what the team focuses on.

Precision shooter Natalie Perrin has a 13-point lead heading into the finals with a first-place position. This American Legion air rifle competition is her last three-position match before heading to college next month to shoot for the West Virginia University air rifle team.

“It’s a really rewarding feeling to have this three-position match as the last goodbye. I’m super grateful to The American Legion for putting on such a great one at that,” Perrin said. “It’s truly an honor to have shot here. I’m looking forward to going into the finals tomorrow.”

Perrin has only been shooting for four years. But “in that time, I’ve put in a lot of work, I’ve put in a lot of effort.” Besides competing in The American Legion’s tournament, she’s also on the National Junior Team. “Having all of those different successes has proven to me that my hard work is paying off. I made the right choices.”

Her love for the sport is that “there’s an equal opportunity for everyone,” Perrin said. “Everyone has similar equipment; everyone has the same opportunity to go down the line and look at that black dot and shoot 10s. Just having that equal opportunity and having it so only you can control what happens to you. It’s nice to have that individualistic aspect to the sport where you’re making your own destiny in it.”

The following are the top eight finalists in precision and their aggregate score.

For the live targets, after opening the web link click Civilian Marksmanship Program – CMP Mobile Range. The list of competitors will populate. Click the box to the left of the competitor(s) you want to view. Then click on the checkmark at the top right hand corner inside the blue box. Targets will populate.