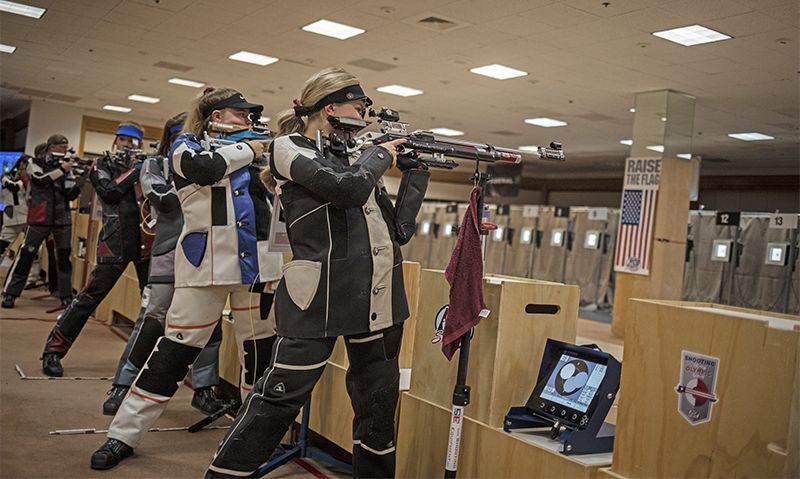 The top eight sporter competitors stood on the firing line first to compete in finals of The American Legion Junior 3-Position Air Rifle National Championship in Colorado Springs, Colo., on Saturday, July 24. The top eight finalists in both the sporter and precision category fired 10 shots in standing position, shoulder-to-shoulder, for the final round inside an old Macy’s building converted into a shooting range by USA Shooting.

With cow bells ringing and clapping from the audience of family, coaches and American Legion Family members, the competitors had 50 seconds for each shot. The distraction didn’t stop Maya Cameron from holding on to the lead alongside three of her teammates who all placed in the top four.

Cameron went into the sporter finals with an 18-point lead at 2, 237 over second-place finalists and teammate Kayla Kalenza . She held on to it to claim The American Legion’s national sporter champion title for 2021 and a $5,000 scholarship provided by The American Legion and Sons of The American Legion. “When I came out here, I just told myself that I wanted to try my best and if I don’t win, that’s on me,” said Cameron, who is on the Nation Ford MCJROTC rifle team in Fort Mill, S.C., and finished the competition with an aggregate score of 2,316. “I felt every shot, even that 3.2 (for the ninth shot which brought her and Kayla’s score about nine points closer). I’m really proud of (my teammates).”

“It feels like a really good accomplishment for the team,” said Kalenza, who finished with an aggregate score of 2,310. “Especially with how much work we have put in this year, at the beginning of the school year not even going to school every day but still coming into practice not only once but twice a day. This being my last year, it’s kind of nice to see not only myself but the team do well. It feels like it all paid off.”

Third place sporter finisher Kyle Orr, a member of the Nation Ford MCJROTC rifle team, said “being a first year shooter it’s obviously a really big achievement. I’m sure my coach is proud; I hope he is. I’ve worked my butt off since September.”

The Nation Ford MCJROTC “hasn’t lost a match in two years,” said retired Marine Col. Sean Mulcahy, coach of the Nation Ford MCJROTC rifle team and founder of it 13 years ago. The team shoots several Saturdays throughout the fall, winter and spring, and sometimes they will shoot three matches in a week. “We try to support every match around us, we try to compete in it, give the kids opportunities to compete. It’s one of the reasons they perform well in the big competition,” Mulcahy said. “They shoot so often that it becomes second nature.”

Mulcahy heard the great success of his athletes in The American Legion’s air rifle competition via phone as he lets the parents attend these championship matches to support their child. But even when not at the matches, Mulcahy’s athletes know he has “their back.” Because one thing about the sport of shooting that Mulcahy has “learned over time is if you don’t stress your athletes out, they’ll perform so much better if they’re not worried about failure. The fear of failure will destroy an athlete. If they know that you got their back and that everyone has off days, and that you’re going to support them no matter what, they tend to do a whole lot better in the big championship competitions.”

Precision shooter Natalie Perrin held her first-place position heading into the finals and shot her last match for the Grand Rapids Rifle & Pistol Club as she heads off to college next month. “This has been rewarding. I’m really happy to have shot this match and to have performed so well. Throughout the days I worked really, really hard for each and every single shot,” said Perrin, who shot at 101.2 for the finals and had an aggregate score of 2,481.2.

Second place finisher Katrina Demerle of Hamilton, Ohio, said the competition has “been very tiring and stressful because it’s not my gun, I’m borrowing a friend’s gun because mine broke on Monday at CMP Nationals. But I’m doing what I can with it.” Demerle shot a 101.5 for the finals for an aggregate score of 2,468.5 and a $1,000 scholarship from the Auxiliary. “I’m proud of myself because of how focused I was to still pull it off.”

For information about The American Legion’s Junior Shooting Sports Program and how to participate, visit legion.org/shooting.