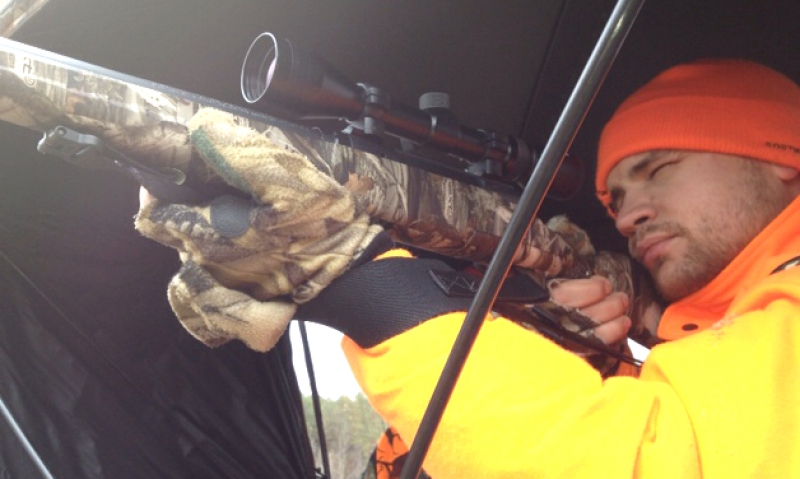 Tim Siebsen of Montgomery, Minn., takes aim from a deer stand at Legionville during a disabled veteran hunt over the weekend.

Welcome to Legionville, Minn., population 1. Roy Kruger, a Vietnam War veteran and fulltime manager, is the only resident, but he’s never really alone. A mama bear and her cub appear from time to time. Signs of wolves can be found along the trails. Deer and Canada geese are always milling about the fringes of the acreage.

And on this particular early-October weekend, Kruger has plenty of human company. It’s the John Zgoda Memorial Disabled Veteran Deer Hunt, a Sons of The American Legion event that for the last seven years has helped expand Legionville’s identity, which for over a half-century has been that of a respected summer camp for school safety patrols administered by the Minnesota Highway Patrol.

“I’m hoping that out of the 600 acres here, each (hunter) will come away with a decent deer,” Kruger says. “There’s a lot of things we can do here. Next year, we’re really going to try to expand it.”

Among the disabled veterans whose names were drawn for the special hunt Saturday at Legionville were one whose leg was shot off in combat during Operation Desert Storm, another who suffered permanent shoulder and arm damage after an incident with a Humvee in Kosovo, and a Korean War veteran who lost most of his hearing.

“I find it the best therapy I could ever have,” says Robert Donaldson, a Little Falls Legionnaire whose 26 years in the Army started with two tours in Vietnam and ended with a prosthetic right leg. “I love coming out hunting. If I get a deer, that’s just an added bonus. I feel safe … there’s a brotherhood here.”

The SAL, which has built five deer stands and placed them around the property, plans a December muzzleloader hunt for disabled veterans at Legionville as well.

“This place is an icon in the state of Minnesota,” Gilbertson says. “All the districts take advantage of that. I think it has unlimited possibilities.”

Legionville is situated north of Brainerd, Minn., along the shore of 6,000-acre North Long Lake. It’s across from a Webelos camp, which presents opportunities because of the Legion’s long association with Boy Scouts, says Minnesota Department Commander Don Pankake, who has made Legionville his main fundraising project this year.

“There are unlimited applications for this property,” Pankake says, noting that its diverse mix of deciduous and evergreen woods, lakeshore, marshes and wildlife make the property a natural fit for environmental studies. With established infrastructure for the school-safety program, the property could be used for Legion Rider motorcycle safety programs, he adds, and they are looking into basing an American Legion Junior Shooting Sports Program there.

Kruger, meanwhile, is thinking of ways to groom the paths and trails of the property for cross-country skiing. “There’s just a lot we can do here,” he says.

The lynchpin between Legionville and its future is a new education center on the grounds to replace the enormous barn that had greeted hordes of schoolchildren every summer since the camp was built in 1956. The big barn had been on the property long before The American Legion got there and in recent years had grown so dilapidated with age it had to be torn down. “The old barn was held up by a steel cable attached to a tree,” Pankake explains. “When they cut the cable, it basically fell in. We are building a brand-new building.”

Minnesota Legionnaires, Legion Riders, SAL members and the Auxiliary have already raised $84,000 for the $300,000 structure, which they hope to have under construction by next summer. It’s the fundraising priority not only for the department commander, but also for two nearby districts.

None of the disabled veteran hunters at Legionville this weekend had ever been to the property before the special hunt. After their applications were accepted and their names were drawn, “the only cost they had was getting here and making sure they had some warm clothes,” says Lloyd Schaeffer, SAL member and event organizer from Chaska, Minn. “We wanted to utilize all of this property and give something back the disabled veterans.”

“I love it up here,” says hunter Tim Siebsen of Montgomery, Minn., who served in Kosovo with the National Guard in 2003 and 2004. “It’s just a great opportunity to speak with other veterans and to learn about the experiences other veterans have had. Good camaraderie.”

“They can’t do enough for you,” Korean War veteran Harry Swanson adds, referring the SAL members who put the hunt together. “It’s fun.”

”We’ve been offered lots of money (to sell) Legionville over the years,” Pankake says. “But the Legion has decided we need to keep this going.”

“We love it so much we can’t ever give it up,” adds SAL Detachment Chaplain Robert Benjamin.