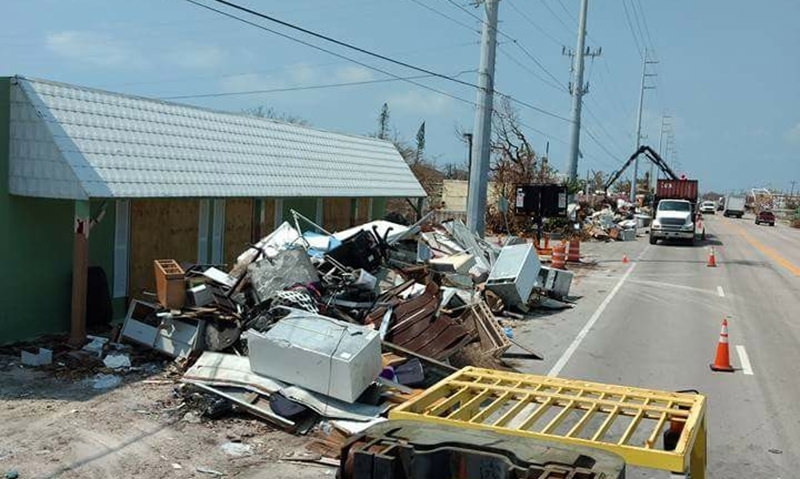 Natural disasters that have occurred throughout the United States this past year have held important implications for members of the Sons of The American Legion.

First, the importance of keeping one’s Sons membership current cannot be understated. In order to be eligible for financial assistance from American Legion programs like the National Emergency Fund (NEF), one’s membership must be in good standing. In addition to the NEF, many detachments have their own emergency funds that also require membership to be current in order to be eligible if assistance is needed during a time of a natural disaster. Not only must membership dues be current, but squadrons and detachments must deliver the paperwork as quickly as possible. Procrastination could jeopardize a member’s ability to apply for, and receive, relief if a disaster hits.

Another important lesson learned is that Sons are an integral contributor to The American Legion’s overall relief efforts. In the wake of the hurricanes, floods, tornadoes and wildfires that have struck over the past year, Sons in every detachment throughout the country have played important roles in providing monetary donations and supplies. They also assisted with transportation needs and delivery of those supplies.

Since August 2017, Sons have been both the victims of and heroes during natural disasters in Texas, Florida, California and Puerto Rico. Many lost homes or belonged to Legion posts that were destroyed. But many more went to work putting together caravans of water, food and clothing that were taken into the disaster areas and distributed, often using Legion post parking lots as staging areas. Still others helped raise the money needed to meet the needs of those requesting assistance through NEF the Legion’s Temporary Financial Assistance program.

Who could have imagined that the damage in Texas by Hurricane Harvey could be matched or exceeded by Hurricanes Irma and Maria, and then by the wildfires throughout California and other western states? In spite of unimaginable damage and suffering, the American Legion Family stepped up time and again.

The line separating victims from heroes can be a thin one. The following are just a couple of stories about Sons from both sides of that line.

Forecasters knew Hurricane Harvey would pack a punch. But when it turned into a 100-year storm, relief efforts by Legion Family members was abound.  While massive amounts of aid flowed in to the state, some of Texas’ own Legion Family members were there in a big way.  During their midwinter conference, two squadrons from the Detachment of Texas contributed $20,000 each to two Legion posts who needed to rebuild after Hurricane Harvey.

Many miles have kept both Henry Hasselhan and Tom Marsden away from their homes and loved ones as they provide recovery assistance in American disaster zones.

Since August 2017, they have traveled to Montana, Texas, Florida, South Carolina, St. Croix and Puerto Rico.  Their disaster relief efforts are not easy.

Puerto Rico remains in crisis. It is an island where virtually everything must be shipped in. Its power grid, crippled by Hurricane Maria, has been running at only about one third of its capacity and has failed several times since the storm, leaving islanders in the dark each time.  Communications are poor with cell service and internet available only sporadically. Transportation is difficult because roads are damaged or missing altogether. Health and safety issues include the presence of the Zika virus and desperate residents, many of whom are existing in poverty conditions. Puerto Rico has twice the poverty of Mississippi, the poorest state in the United States.  Living accommodations are beyond imagination – trees on roofs, disgusting sanitation, limited and contaminated water. Food and supplies are highly priced and limited. Roaming packs of dogs scavenge in the streets. It’s estimated that 200,000 residents have fled to Florida since the storm.

Hasselhan, a member of Squadron 311 in Atco, N.J., is a Detachment of New Jersey vice commander who spent 31 years working in environmental protection.  After retiring in 2007, he has chosen to remain on call to support emergency incident operations.

“Devastating wildfires, tornadoes and hurricanes have taken its toll on our great country,” Hasselhan said. “I have seen firsthand the destructive wildfires in Montana killing livestock and destroying homes. I have seen the devastation of Hurricanes Irma and Maria. Homes may have survived but the need for basic utilities has overwhelmed the island. As we sit down to delicious meals here on the mainland, I am very grateful that we can just flip a switch and the lights come on, turn on the faucet and have running water, flush the toilet and not have raw sewage running down the street. The need is great but it takes time and money to repair and rebuild after such destruction.”

Marsden, a member of Squadron 348 in Brick, N.J., has served in many SAL leadership roles, including detachment commander, National Executive Committeeman, national vice commander, and national historian. The impact of 2012’s Hurricane Sandy involved him in emergency response, and he remains in the field to this day, traveling most recently to Puerto Rico to assist in cleanup and repair efforts.

One does not necessarily have to undertake big efforts like on-the-ground emergency support in the wake of major natural disasters. A donation to the Legion’s National Emergency Fund, or donations of water, food or clothing for local emergency relief efforts are other ways people can show their support. Efforts like those of Hasselhan and Marsden represent the heart of our organization.

As part of the military and civilian efforts that are giving aid to fellow Americans, Hasselhan and Marsden have given of themselves selflessly to victims of natural disasters.

At approximately 3:15 a.m. on Oct. 9, I was shaken awake by my wife because she smelled smoke. I told her it was the Napa fire and to go back to sleep. She then noticed that my cell phone on the night stand was lit up from a text message from my son in New York. It said, “The Redwood Valley house has burned down and I understand there’s a fire where you are. How are you doing?” We immediately got up and realized the smell of smoke was very strong.

We went downstairs, opened the front door and saw red embers blowing sideways across the yard because of strong winds. We had no power and were in total darkness. We then started to discuss what to do when a neighbor banged on the front door screaming, “The fire is here!”  Seeing that the neighbor’s fence across the street was on fire and the smoke was getting thicker, we got into our car and drove out of the neighborhood with just the clothes we were wearing. There was fire on both sides of the road as we drove out of the neighborhood.

Several nearby hotels were completely engulfed in flames. It sounded like bombs going off as transformers and propane tanks exploded. Fire was on both sides of the freeway. It was surreal.

We ended up at a relative’s house where we could see from their kitchen window the fire burning in Santa Rosa. Nobody could sleep for several days as we were concerned the fire would continue to burn to the west and we would have to evacuate again.

On Oct. 9 at 4:30 a.m., I was awakened by Cloverdale police ringing my doorbell.  They asked if I could open the Cloverdale Veterans Memorial Building and use it as an evacuation center. I was told about the fires and that we may be getting evacuees from Palomino Lakes and possibly from Santa Rosa and Mendocino County.  I contacted two other members of our squadron and 30 minutes later we had the building open. There were just six evacuees at our building that morning – most evacuees were going to the Cloverdale fairgrounds next door – so we transferred our evacuees to the fairgrounds and closed the shelter. Some squadron members went to the fairgrounds to assist in feeding and gathering supplies for the 100 to 120 evacuees there, many still in their night clothes. The evacuation center remained open for one week.

The fire reached the southern border of our community. Most of our local firefighters were fighting fire in the Santa Rosa area. Local citizens, including one member of our post, organized a citizen fire brigade and were fighting fires on the southern edge of the Palomino Lakes neighborhood. No homes were lost and there were no injuries. Squadron 293 donated $500 to the American Legion National Emergency Fund. Money was collected during our annual car and motorcycle show to help victims of the fires and hurricanes that struck our country this past year.

A charter member of Napa, Calif., Squadron 113, Richard Dahlgren lost his entire collection of antique and classic Harley Davidson and Indian motorcycles in the Atlas Peak fire. He had stored them all at his family’s home.

His parent’s home of more than 50 years burned to the ground, but no one was injured.

(Editor’s Note: Many thanks to those who contributed to this article including Dustin Moore, Pat Marsden, Steve Brown, Al Delsid and Greg Anderson.