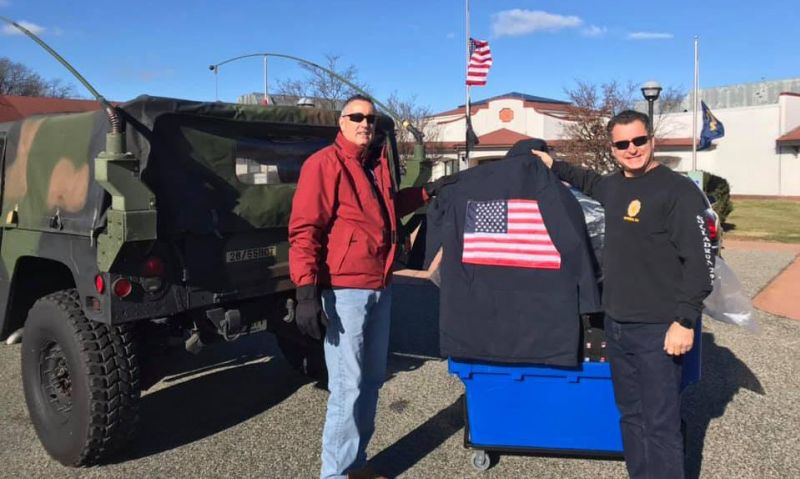 From left, Jim Gaffney, commander of the Sons of The American Legion squadron at Post 293 in Warren, N.J., and squadron historian Anthony Giordano pose with one of the coats they distributed to veterans in the area. Photo submitted.

Each of the last four years, American Legion Mantz-Cavaliere Post 293 in Warren, N.J., has conducted an annual holiday fundraiser to collect coats and other items for patients at the local VA hospital.

This year, thanks to some connections through the Sons of The American Legion squadron at the post, the drive went above and beyond.

Squadron historian Anthony Giordano coordinated the donation of 150 coats from the minus5 ice bar in Las Vegas.

“They had 150 brand new coats still in the wrapper,” said squadron commander Jim Gaffney. “They were looking to do something with them.”

The only caveat was that the bar’s logo on the back of the coats be covered. The squadron found a woman who volunteered her time to sew American flags over the logos.

In addition to the coats from Las Vegas, Post 293 raised almost $2,000 for the regular drive, Gaffney said.

“It’s important to us to understand who (is at the VA) and what their specific needs are,” Gaffney said. For example, if a vet is looking for new headphones, the post will try to make that happen.

“We’re just trying to spread it around,” he said.