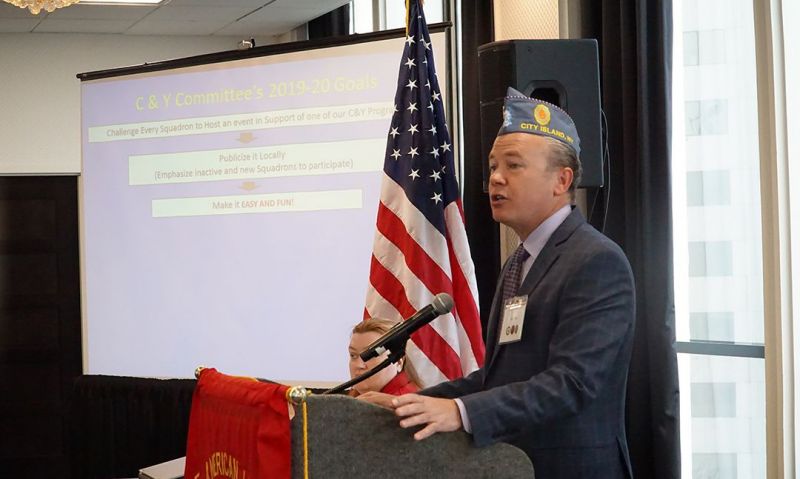 “That is what we do. It is a big part of the Sons program, and we have a lot of fun doing it,” said SAL Children & Youth Chairman William Clancy of New York to attendees of the National Children & Youth Conference in Indianapolis Sept. 21.

During his remarks, Clancy shared several of SAL’s goals for the 2019-2020 membership year.

- Challenge every squadron to host an event that supports an American Legion children and youth program, such as the Child Welfare Foundation or Temporary Financial Assistance program, or other programs supported by The American Legion and SAL such as the Special Olympics, Children’s Organ Transplant Association, etc. Squadrons are to publicize the event in their local media and get inactive squadrons to participate. “Why? Because if you do something for kids it builds excitement. If you build excitement, it helps our organization grow,” Clancy said.

He and SAL National Commander Clint Bolt hope the outcome of these events creates more squadron excitement, gets kids into their local posts along with their parents who may be American Legion Family eligible, boosts the American Legion Family image and increases donations. “Most importantly, the more kids that we have come through our doors, touch our programs, they will be inspired to a life of service to community, state and nation.”

This challenge will be featured on the SAL’s CPR for recognition purposes.

- Have another youth room during the SAL’s national convention next year in Louisville, Ky. Outgoing SAL National Commander Greg “Doc” Gibbs had the idea of a youth room during convention in Indianapolis in August. About 15 children of Sons members came, ranging in age from 2 to 17 years old, where they learned about the ideals of the SAL, how to properly fold an American flag, discussed veterans in their families and participated in activities. “The Sons seek to make this an ongoing part of convention,” Clancy said.

- Raise $500,000 for CWF. “Our CWF goal is to again lead the American Legion Family in donations," Clancy said. The SAL is the largest contributor to CWF, having donated more than $8.2 million.

- Increase child action teams, which are teams within detachments that focus on raising CWF donations and push activity.

“If we build our children and youth activities we’re not only helping kids, but we’ll be helping ourselves,” Clancy said in his final remarks. “We’ll help growth across the entire American Legion Family and determine a bright future ahead.”