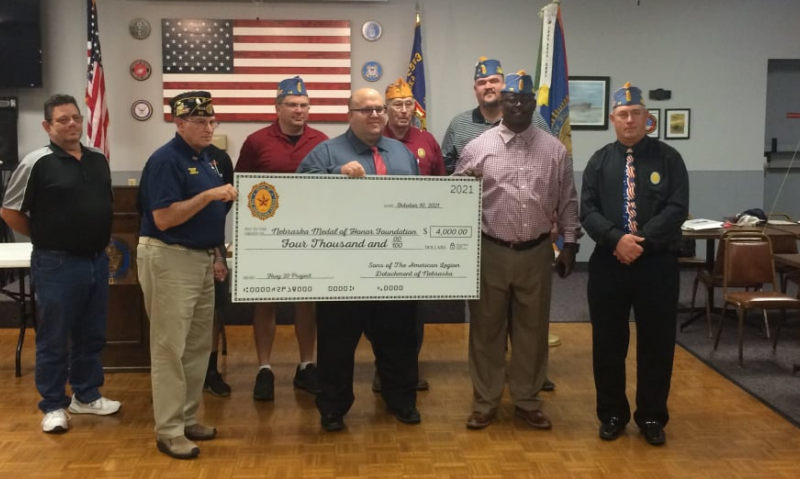 A donation from the SAL Detachment of Nebraska will help place two signs along the Nebraska Medal of Honor Highway.

Detachment Commander Chris Casey and others presented a $4,000 check to Tom Hansen, treasurer of the Nebraska Medal of Honor Foundation, at an event in Omaha, Neb., on Oct. 10.

Tom Hansen is the great-nephew of Medal of Honor recipient Dale Hansen. A native of Wisner, Neb., Dale Hansen earned the Medal of Honor for his actions against Japanese troops on Okinawa on May 7, 1945, dying four days later.

On Jan. 31, 2020, Nebraska Gov. Pete Ricketts signed paperwork renaming the 432-mile stretch of U.S. Highway 20 running through his state the “Nebraska Medal of Honor Highway.” The renaming is the continuation of an effort that began in Oregon in 2018 and has since moved into Idaho, Montana and Wyoming. Similar efforts have begun in Iowa, Illinois, Indiana, Ohio, Pennsylvania, New York and Massachusetts, with the hope the designation eventually extends all the way to the end of Highway 20 in Boston.

“For us Sons that may not have served, I mean it’s everything for us to be able to give back to our communities so to know we’re part of something bigger than ourselves, it’s huge, it’s a huge feeling, a big sense of accomplishment and honor to do things,” Casey told WOWT-TV.