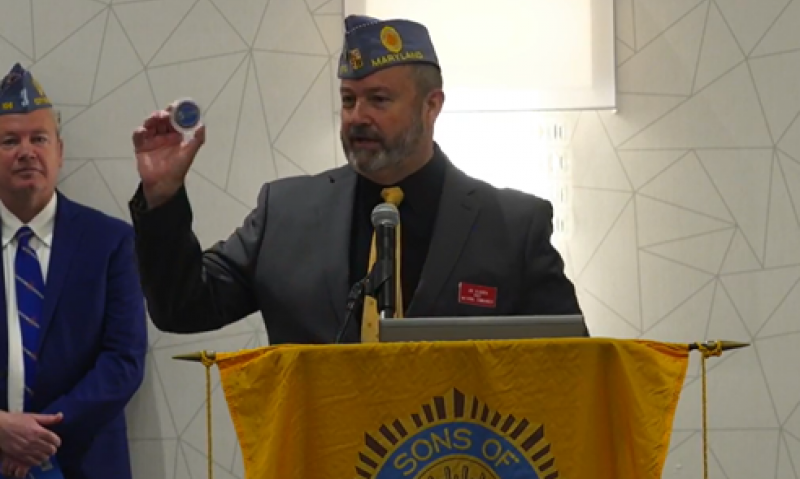 SAL Past National Commander Joe Gladden holds up a copy of the SAL 50th National Convention Challenge Coin during the SAL Spring NEC Meeting May 1, 2022, in Indianapolis.

The National Executive Committee (NEC) of the Sons of The American Legion heard updates on this year’s SAL National Convention — the program’s 50th — at the Spring Meetings on April 30-May 1 in Indianapolis.

“The back is actually the first (SAL) convention pin (from the 1972 Chicago Convention),” he told the NEC on Sunday. “On the front it says ‘50th’ and the zero is our SAL emblem.”

Gladden said each attendee of the convention banquet on Aug. 27 will receive a challenge coin. Tickets for the banquet, which is open to the Legion Family, will be $45.

Those who submitted challenge coin designs and who had parts of their design used for the coin will be entered into a drawing for tickets to the banquet, Gladden said.

Gladden also thanked SAL National Historian Bill Towns for his work in collecting photos and other content for a 50th convention book.

“Bill Towns has spent 1,200 hours gathering pictures, coming to Indianapolis and going through the archives,” Gladden said. “I also want to thank all of you out there who have submitted pictures.”

Gladden added that there will be a memory wall on display with pictures from previous national conventions, and they’re working to add a keynote speaker for the Saturday afternoon banquet.

In other convention updates, Children & Youth Committee Chairman Jim Noble said the youth room is getting a name change, to the National Children & Youth Academy, and that attendees in Milwaukee will take a tour of the nearby General Mitchell Air National Guard Base.

“This is going to be our third annual youth room. And I’d like to issue a challenge to all of the local squadrons, to come with kids. It’s a heavy lift to ask a family to get on a plane, but it’s not a heavy lift to ask the family to get in a car and drive a few hours to the national convention,” Clancy said, asking squadrons to keep this in mind for every convention going forward.

“We are working hard to make sure the 50th is a great convention,” Watry said.