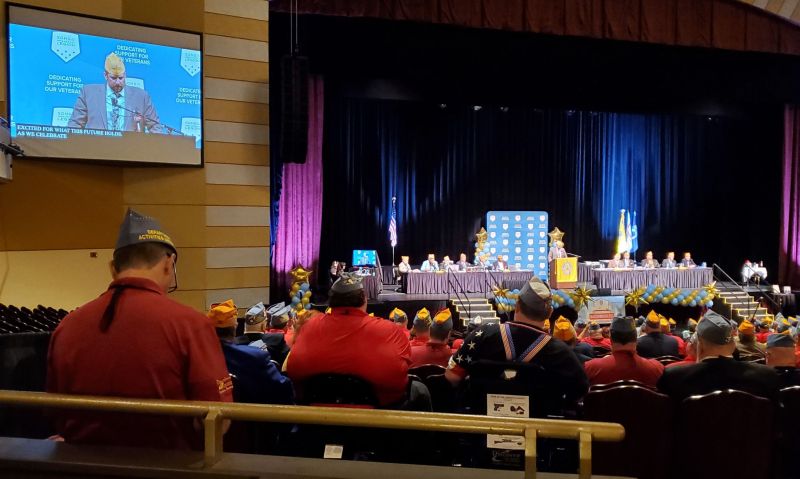 As J.R. Stillwell stood at the podium on stage at Milwaukee’s Miller High Life Theater on Friday, he had to compare the venue — site of the 50th Sons of The American Legion National Convention — to the locations of the workshops in the years preceding the first convention.

“When we attended a meeting many, many, years ago, we got everyone that was there for the national meeting in a little room, you could probably put 20 of (those rooms) in this one,” Stillwell said. “God, people, look around at what we’ve come to.”

The SAL celebrated its history on Friday’s first day of the 50th national convention by recognizing those past national commanders able to attend the event — including those like Stillwell who were instead called national chairmen when they served because the SAL was still operating under its original bylaws.

The American Legion National Executive Committee approved a new constitution and bylaws for the SAL in May 1972, three months before the SAL’s first national convention in Chicago.

“I think about how long ago we got started, and what our missions were,” said Robert McBride, who served as SAL national chairman in 1969. “We kickstarted something that we could never imagine was going to be what it is today.”

McBride; Stillwell, who served in 1970-71; Michael Seaton (1968) and John Smolinski (1972) are now considered past national commanders of the SAL. But the first officially elected SAL national commander was Bob Faust, whom current National Commander Michael Fox called “a dear friend my entire life.”

“Bob has been mentoring me since probably before I can remember,” Fox said.

The weekend isn’t only the SAL’s 50th national convention, which will be marked by a special banquet Saturday afternoon, but the program is also celebrating its 90th anniversary after first being created in 1932.

“Our organization has come a long way in supporting our nation’s heroes and their families since our inception in 1932. In our 90 years of existence and 50 years of holding national conventions, we have transformed into the greatest program that The American Legion has, something each and every one of you should be proud of,” Fox said.

“You should also be proud of that veteran that gave you your eligibility to be a part of this organization. You should be proud of the great work you have done and get excited for what this future holds. As we celebrate our 50th national convention, each and every one of us should take some time to reflect on the amazing work that our founders did, the vision they had for our organization some 50 years ago. Take a moment to speak to some of those founding members (this weekend),” Fox added.

The convention is also dedicated to the memory of SAL PNC Roland Matteson, who passed away Jan. 1 in Phoenix. Matteson served as national commander in 1994.

Legion leadership. American Legion National Commander Paul E. Dillard, the leading candidate to succeed him and the trailing candidate for the position each spoke to the SAL delegates on Friday.

Dillard thanked the SAL for their support in passing the PACT Act, which will help thousands of veterans facing health issues from burn pits and other toxic sources. “You all are always there in support,” he said.

Leading candidate for national commander James Troiola noted that he was a member of the SAL before he joined The American Legion six months later.

“If that didn’t happen in my life, I don’t know where I would be today,” Troiola said.

Troiola also touted the Be the One campaign aimed at helping veterans with their mental health. He said it’s important for the entire Legion Family to get involved.

“We want to get everyone of you trained, if you’re not trained already, on how to start a conversation with a veteran with mental health problems. Know what to ask and know what to listen for so you can identify somebody within your own community who needs help,” Troiola said.

Trailing candidate Daniel Seehafer agreed that the Be the One campaign is important enough to be an ongoing focus.

“One year is not sufficient with this, and I think you’d all agree,” Seehafer said.

He also encouraged the SAL to find ways to help veterans considering suicide, and to be prepared.

CWF. After passing the $9 million mark in lifetime donations from the SAL to the Child Welfare Foundation (CWF) earlier this year, the next goal is $10 million.

CWF President Dennis Boland thanked the SAL for their support of the fund.

“Without your backbone at times, the Child Welfare Foundation would flounder,” Boland said. “… It’s not monetary figures, it’s the lives we save.”

“It is you, the Sons, that continue to set an example of how a veterans support organization should be modeled,” Newman said.