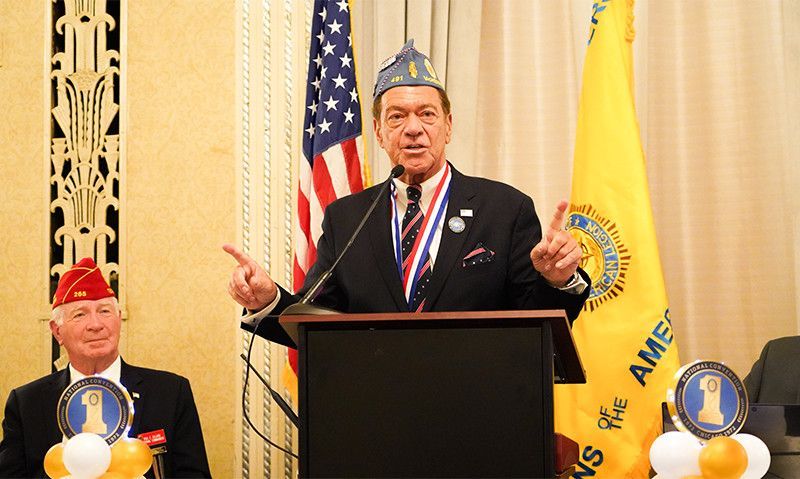 For American Legion National Commander Paul E. Dillard, it was a beautiful sight.

“This is kind of what I’ve seen of pictures of the Legion many years ago, when it was so crowded you couldn’t hardly get through,” Dillard told the audience. “I think it’s beautiful that there’s this many people crowded in here for the same cause.”

Dillard was one of several guest speakers to address the crowd at the banquet, held to celebrate the SAL’s milestone convention.

Joe Piscopo, the Saturday Night Live alumnus and radio show host who was inducted into the SAL during an event in Woodstock, Ill., in May, said he was “humbled and amazed” to be part of the event.

“I am so honored to be up here,” Piscopo said. “I don’t belong up here, but in the name of my father, I appreciate it.”

Piscopo said the future of the nation is in good shape because of the Legion Family.

“Our parents and grandparents believed in the promise of America, the promise that all men and women are created equal in the eyes of God, that a nation of free people is always stronger than a nation oppressed and divided, and that every individual has something worthwhile to contribute to society,” Piscopo said. “It is our job to carry on the legacy of the Greatest Generation. We must believe in America as they did and inspire future generations to carry that same torch.

American Legion Auxiliary National President Kathy Daudistel noted that “everywhere we go, the Sons have a presence.” And PNC Jake Comer said it would be difficult for the Legion to do its important work without the help of the SAL.

Legacy Run Chief Road Captain Mark Clark, himself a member of SAL Squadron 21 in Missouri, said the Legacy Run couldn’t happen without the dedication of the Sons.

“The entire family is here, and that’s what this is about; this is what the entire 50th year was about … was bringing the family back,” SAL National Commander Michael Fox said. “As I preached all year, the stronger we are as a family unit, the better we are. The more we can show unity as a family, the more things can get done.

“… If we can pack a room like this, what can we do 10 years from now? How much better can we be for The American Legion? They need us, we need them. It’s a family unit.”