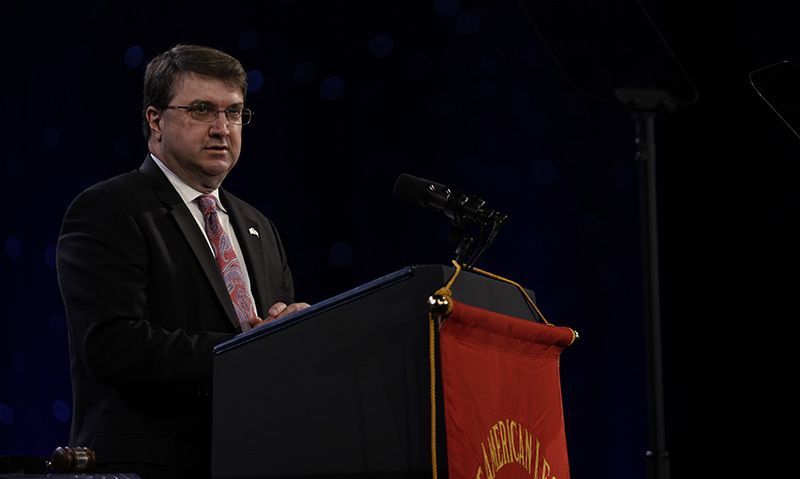 Standing in front of delegates to The American Legion’s 101st National Convention in Indianapolis, Department of Veterans Secretary Robert Wilkie said that he and President Donald Trump are of one mind when it comes to the department’s most urgent mission.

“Suicide prevention is the No. 1 clinical priority of the president of the United States. It’s my top priority for veterans,” Wilkie said on Aug. 28 in Indianapolis. “As long as we are still seeing veterans struggle, we must all guide them back to the community of this brotherhood, this military family. They need our love and support.”

Wilkie said of the 20 or so veterans that take their own lives each day, half are over age 65 – the majority of those Vietnam veterans.

“Let me put that into historical perspective,” he said. “Lyndon Johnson left Washington, D.C., 50 years ago in January, and we are still dealing with the after effects of that conflict.”

Only six of the 20 veterans committing suicide daily are in the VA system. Those in the system, Wilkie said, are screened for mental health when they walk into a VA facility. VA also provides same-day mental health care.

“But just as important, we are talking about this issue more within the active-duty force,” Wilkie said. “The practice of my father’s generation – not to talk about these things – is now giving way to an open discussion among our active servicemembers, who have now learned the importance of looking out for signs in themselves and signs in their comrades of distress.

“But no VA secretary, no federal department, can solve this problem from Washington, especially when most of those veterans we need to reach are not in our system. We will not get anywhere on veteran suicide until this nation has a national conversation about life. And that is a conversation that veterans can start today.”

Wilkie asked that the conversation include veteran service organizations. “The federal government needs to build those partnerships with organizations like the Legion, and states and localities, to get to those in the community who can deliver aid directly to those in need,” he said. “For example, there’s important legislation in the Congress now that would let VA direct funding to groups like yours, to community partners across the nation, so they can support veterans at risk of suicide.”

Wilkie also brought up the issue of opioid addiction and noted that VA has reduced its opioid prescriptions by about 51 percent during the current administration. He also said VA is looking at other pain treatment options that “would never have been considered in my father’s day: yoga, tai chi, acupuncture. If I had told my father that I would treat the pain of his wounds with acupuncture or tai chi, my nose would be flat against my face. But culture is changing, and we’re giving veterans healthier alternatives as a result.”

Wilkie called the MISSION Act “the most successful piece of legislation since the GI Bill” and “the greatest change in our department since Omar Bradley sat at the desk that I now occupy.”

The MISSION Act has “revolutionized the way we look at veterans by saying … that it is VA’s job to fit the needs of the veterans, instead of forcing America’s veterans to design their health care around the needs of the VA bureaucracy,” Wilkie said. “Under MISSION, veterans can now get care in their community if a VA facility is too long a distance away, or if VA does not have the care they need, or even when that veteran says ‘it’s in our best interest to go elsewhere.’

“And finally, it gives veterans what their neighbors have had for so many years: the option of getting urgent care close by, without having to drive to a VA, without having to go into an emergency room for a cold or the flu, and that means we are finally on the cusp of providing veterans 21st century medicine.”

But Wilkie said while the MISSION Act gives veterans permanent choice, “it is our goal, again, to make it a tough choice,” Wilkie said. “And we know that America’s veterans prefer VA because they want to go where people speak the language and understand the culture.”

Expanding outside care options doesn’t mean the VA is shifting closer to privatization. “Let me address that as I’ve addressed it under oath,” Wilkie said. “I was privileged to present the largest budget in the history of this department to the United States Congress: $220 billion. I’m the only member of the president’s cabinet who was ordered not to present any budget cuts to the Office of Management and Budget. And I can tell you that I have the same standing orders for next year’s budget. A $220 billion budget calling for a workforce of 390,000 employees is a very strange way to privatize the department.”

Wilkie said VA is about to launch the first testing of its new electronic health record in the Pacific Northwest and Alaska.

“No longer will warriors have to carry around hundreds of pages of paper records that are disintegrating in their hands,” he said. “That means doctors will never have to guess again what you went through. It will finally be interoperable. That means if you go to an urgent care facility, if you go to your private doctor, those doctors will have the ability to tell VA what they have done for you and what you need for your future care.”

Wilkie said his department is focusing on hiring and training over 2,000 employees to process Blue Water Navy veteran claims that will begin being awarded Jan. 1, 2020 – “benefits that 75,000 sailors and Marines deserve and deserved a long time ago.”

Wilkie took time to thank The American Legion for helping change the climate toward the nation’s veterans.

“Today, we are a pro-veteran country. We see it everywhere,” he said. “We see people standing for veterans at the ballgames, at the airports. And in a political climate, as charged and divisive as this one is, veterans are the only things (political parties) seem to agree on.

“There is a reason for that. It’s (The American Legion). This Legion knows something about where we came from and the importance of reminding us all of the shared sacrifice that these members have.”