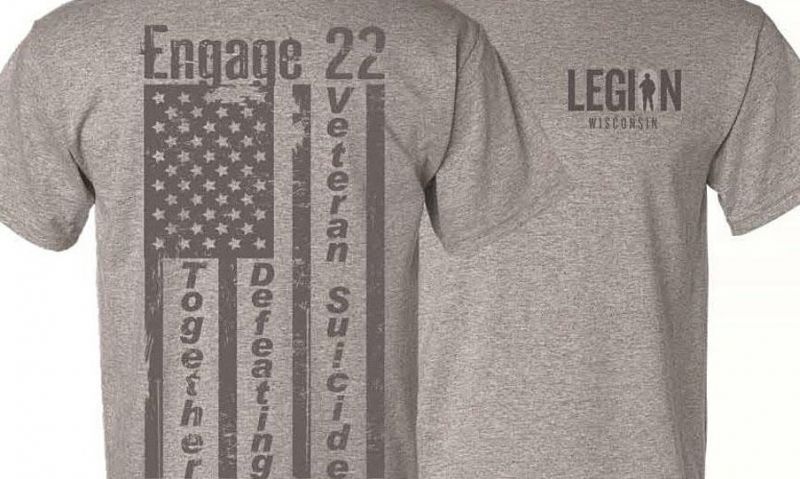 The American Legion Department of Wisconsin has used its mid-winter conference to conduct training sessions on a variety of Legion topics such as membership, military honors and leadership roles. “A more informed Legionnaire is a better Legionnaire. They can go back into their community and tell what the Legion is all about and how we can assist,” said Department of Wisconsin Commander David Wischer. Under Wischer’s leadership, an ad-hoc committee on veteran suicide awareness was formed and a training session on it was held during the department’s mid-winter conference earlier this year.

The conference room was reserved for an hour and a half with room capacity of 100; an overwhelming support for the cause expanded room capacity to 200 and the time to three hours. Two veterans shared their stories and experiences of suicide attempt, and a doctor from the Milwaukee VA Medical Center discussed post-traumatic stress and traumatic brain injury.

Wischer said attendees were “on the edge of their seats and crying” from hearing these personal experiences from their fellow veteran. “We just needed a conversation to be started.

“We weren’t going to find a solution and that’s what we told people. It was that we have to confront the problem that it is and move forward from there. This is something we need to address.”

Wischer’s project as commander is building a better awareness for suicide prevention. He’s been a listening ear to many fellow veterans who have had suicidal thoughts, including an Iraq veteran who lost friends on the homefront due to suicide.

“He was reduced to tears and shaking because he can’t control it. Some people don’t realize how real PTSD and TBI is," Wischer said. The only people that can really understand it is fellow veterans. Maybe we weren’t in the trenches and we sat behind a desk, but we understand.”

Wischer traveled around the state last year visiting VA hospitals, seeing the effects of PTSD, and hearing from doctors and nurses about it being a No. 1 concern. “These young veterans are just in a world of hurt. And we want to make the message clear that The American Legion is here to assist you," he said. "We want to stay positive. We want to make sure our message is always positive.”

That message was to be delivered at the department’s convention this summer through a 2.2-mile walk to raise awareness about the estimated 22 veterans who die by suicide every day. But then COVID-19 canceled the convention and challenged department leadership to think outside the box.

The result was the Department of Wisconsin’s Engage22 Virtual Suicide Awareness Walk-Run-Ruck-Bike on July 17.

“We felt there was no reason we still couldn’t do this (walk) but make it bigger and better now that we can make it virtual and people throughout the country can get involved,” said Angie Chappell, who serves as the department’s major events planner and executive secretary to the department adjutant. “We took something bad with convention being canceled but kept the excitement going and kept The American Legion relevant in a year where we’re losing that relevancy of not being in front of our people.”

Whether it’s a 22-mile bike ride or a 2.2-mile run or walk, participants are encouraged to be creative and share their story through Wisconsin’s social media channels using the hashtags #wilegion, #engage22 and #22aday.

“(Convention cancellation) just gave us another opportunity to do somethng different,” Wischer said. “You just move on from there, readjust your aim and go in another direction.”

He added that suicide prevention awareness “goes beyond the effects from war” as COVID-19 is impacting families across the nation due to isolation, job loss and financial stress.

“We talk all the time of how do we stop veterans suicide and then we end up in a world where people who should never isolate are being told to isolate,” Chappell said. “This is the time to show veterans that we’re really there for them.”

Registration for the virtual event is $15. The fee, as well as any donations, will go back to department programs that support awareness for veterans suicide. And registered participants receive a T-shirt – the start of a conversation.

“People will see the shirts and ask, ‘Why?’ ‘What is that shirt about?’ ‘What are you trying to do?’ For people to be able to discuss that with one more person, we’re farther ahead than we were before. It may change somebody’s life. Or a family. Our hope is one at a time,” Wischer said.

The Department of Wisconsin’s ad-hoc committee on veteran suicide awareness has encouraged the Fourth District to create their own. “They’re making this part of their programs now, and I love that,” Wischer said. “And there we are … we’ve taken the awareness one step further.”

Wischer’s membership pin for 2020-2021 is of two hands reaching to each other as a symbol of one veteran helping another. And his theme is “Forward Together.”

“With suicide awareness it’s forward together," he said. "As veterans when we were serving that’s how we got things done is together; you couldn’t do it on your own.

“We can move forward if we’re together. The only people that can understand it is fellow veterans."