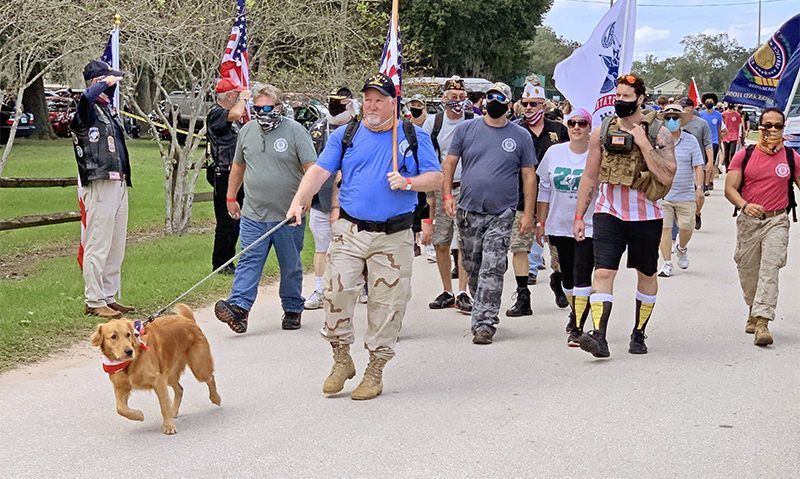 Kurt Gies was a new resident of Winter Garden, Fla., in 2015 when he and fiancée Lana needed to book a reception hall for their wedding rehearsal dinner. They stopped by the 1926-built red cabin on West Plant Street, home of American Legion Post 63 – a place they had passed many times but never really noticed – and booked their event. While there, Gies asked what went on at The American Legion. “I told the guy, ‘I’m retired from the Navy. Am I eligible?’”

Soon, Gies attended his first Post 63 meeting. There, a member welcomed him, thanked him for coming and asked him to return the next month. He did so and was later elected post chaplain.

In late August 2016, he received an email that would both challenge him and change his life – the second time the organization had unexpectedly done so since Gies participated in American Legion Boys State in 1981, a step that helped him get into college, go through ROTC and pursue a career as a naval engineer.

“I got an email saying, ‘September is Suicide Awareness Month. We’ve got 22 vets a day committing suicide. Get a group of people together and go out for a walk to raise some awareness.’ My first reaction was, as a retired naval officer after 25 years, we have how many people committing suicide? Twenty-two a month? No, it was 22 a day.”

That year, he walked the West Orange Trail through Winter Garden alone and contemplated that number. Something bigger, he thought, could really drive home the staggering statistic – “22 a day … I thought it was some kind of misprint.” He researched it and found that it was not. A young Marine who had joined his post that year said she had been part of a group that did a 22-kilometer walk in combat boots, each participant carrying a 22-kilogram pack, to raise awareness about the issue. That distance – about 13.6 miles – he determined, was a bit much to engage the community at large.

That’s when he landed on Challenge 22 – an idea earlier executed by American Legion Post 69 in Avon Park, Fla. – that could be tailored to fit the Winter Garden community. The Post 63 version would be a ruck march of 2.2 miles, beginning and ending with ceremonies involving local veterans, post-supported Sea Cadets, other area Legionnaires, families, community members and organizations that help veterans dealing with post-traumatic stress disorder.

The first year of Challenge 22 in Winter Garden, Post 63 attracted about 150 walkers and raised over $31,000. Moreover, some 60 members of the community, many of whom previously were not affiliated nor fully aware of The American Legion – as was the case for Gies in 2015 – showed up at the post the night before the walk, filled registration bags and prepared for the event. Membership started to tick upward.

The second year, joining forces with a local brewery, the Post 63 Challenge 22 drew some 700 participants, about 400 of whom walked the 2.2 miles through the heart of Winter Garden’s restaurant and shopping district. In 2019, the number of participants climbed to more than 1,000, and the event raised $85,000. Live music, food and beverages, ceremonies, presentations on treatment programs and other activities converted the suicide-prevention walk into a celebration of patriotic responsibility.

Five other posts in Florida were having their own Challenge 22 events by 2019, including Port Charlotte Post 110, where 30-year Legionnaire and Navy veteran Jessica Moore is District 13 commander. “To me, 22 veterans a day is unacceptable,” she explained before Winter Garden’s Nov. 14 Challenge 22 walk. “It needs to be zero. There shouldn’t be any veteran committing suicide right now … It’s not just us raising money and raising awareness – it’s getting to the right people who can help veterans who need it right now.” The Port Charlotte Challenge 22 event was set for the following week, and, like Winter Garden, it aimed to support and promote PTSD treatment organizations and programs, including service dogs and equine therapy.

In January 2020, Post 63 was planning its biggest Challenge 22 event ever, with commitments from rock musician Robbie Merrill of Godsmack and Nashville recording artist Sean Holcomb scheduled to perform live onstage for the second straight year. Post 63 hoped to raise $100,000 to distribute among suicide-prevention groups and treatment providers, including 22 Zero, a group that uses peer-to-peer RTM (Reconsolidation of Traumatic Memories) protocol to help veterans with PTSD. “They are finding a 90-percent success rate with it… and they don’t have to talk about what happened,” Gies explained. “They don’t have to take any drugs. They don’t have to put their name on a list.” The program, which has assisted more than 1,500 veterans in central Florida and trains others to conduct the protocol, is now being researched at Walter Reed National Military Medical Center, Gies said, adding that the treatment has been used to help not only veterans but first responders, child abuse victims and mental health counselors, as well. The sessions can be – and are, in the time of COVID-19 – conducted through online video conferencing platforms.

As the pandemic hung over 2020, plans for the fourth annual Winter Garden Challenge 22 grew dicey. Large community gatherings in the city were suspended. Even the annual holiday lighting of the downtown district – a beloved tradition – was canceled due to COVID concerns. The city asked the post to call off the Challenge 22 event.

“We worked through it,” Gies told the crowd at Veterans Memorial Park on Nov. 14. Strict conditions had to be met. Capacity would be limited to no more than 500. No beer could be served. And, emphatically, all in attendance were required to wear protective face masks. After the post agreed to the conditions, the event was not only authorized, but the city also provided a stage, port-a-potties, fencing and, Gies told the crowd, “they’re writing a check for $2,500 for Challenge 22.” Winter Garden Mayor John Rees was at the park on the morning of the event and was applauded by veterans and their families for working with the post to keep the event going.

“The American Legion was founded as a bunch of veterans serving veterans, who came home from World War I and realized they were not going to solve the issues they were facing without engaging the community,” Gies told the crowd. “We’ve taken that mission to heart here in Winter Garden.”

Before participants began their 2.2-mile trek, the Lady Lake American Post 347 Honor Guard presented the colors, and the Sea Cadets conducted a flag-retirement ceremony. Speakers included American Legion National Judge Advocate Kevin J. Bartlett who posed a challenge of his own. “I would like you to call at least 22 people and say, ‘How are you doing today? I’m just doing a Buddy Check and making sure my buddy is good today.’ We have a duty to check on our buddies … People are taking their lives because of a variety of reasons, but if you check on them, maybe you will stop them. Maybe you will help them.”

Post-9/11 Air Force and Marine Corps combat veteran Damon Friedman, founder of SOF Missions – which provides holistic psychological, social, spiritual and physical treatment for veterans confronting PTSD – told the group of his own inner battles after wartime service. “I did the nation’s bidding, but I had no idea the implications … no idea the ramifications,” he said. “I had no idea that when I came back home, I would have all these issues, these symptoms – anxiety, depression, flashbacks and nightmares. Sweating profusely. Not knowing what to do when I am in the middle of a crowd. Nobody trained me for that. Nobody educated me for that. They just educated me to grab that rifle and shoot somebody 500 yards away. That’s all that I was trained to do. I came home, and I was struggling hard. I was sleeping 2-4 hours a night. I was in a dark, dark place.”

Nearly two decades of combat service and special operations, he explained, led him to a “crossing point” when “good people that loved me and cared about me said, ‘You’re not going to walk down this dark road alone.’” The care and attention he received, he explained, helped him survive what he called “the ambush,” and he wanted to extend the same kind of support he had received to all veterans and others who struggle with the effects of trauma. In 2011, he co- founded SOF Missions to fulfill a clear mission, as stated on the organization’s website: “to combat the veteran suicide crisis.”

The help he received, he said, should be provided to all who need it. “If I got it, I want every American to have the same. It doesn’t matter who you are. We want to serve you. We (SOF) started serving one at a time. And soon, hundreds. Now thousands of veterans we provide care for. All you have to do is be ready and willing to start healing.” Essential to the SOF mission, he explained, is the Veterans Coalition of Florida with other groups like The American Legion, Guardian Angels Service Dogs, 22 Zero and Veterans Counseling Veterans. “We’re coming together for one reason and one reason only.”

That reason was illustrated in person when Dr. Giovanni Valez stepped to the microphone to share with the crowd the tragedy his family endured in the week before the Winter Garden Challenge 22, when his U.S. Army veteran father took his own life. “He served proud,” Valez said, recounting his Puerto Rico-born father’s stories of learning English in the U.S. military and using his college degree and training to serve in biomedical labs. “He was very, very proud of what he did, his history. Of course, he had to deal with some issues.”

Events like Challenge 22, he said, “will hopefully bring more awareness to everyone involved… It affects vets. It affects families.” He added that programs like American Legion Budy Checks can make the difference between life and death. “One call is all it takes. I wish I had made that one call to my father.” Gies presented Valez a folded U.S. flag following his message.

Two World War II veterans, Gibert Waganheim and Mel Jenner, celebrated their 99th and 98th birthdays, respectively, onstage at the Challenge 22 opening ceremony. Waganheim briefly recounted for the crowd his experiences with the 42nd Tank Regiment of the 11th Armor Division late in World War II and the grim liberation of the Mauthausen Nazi concentration camp. Jenner, who flew 46 combat missions in the European Theater, told the group “I saw so many airplanes that were shot out of the sky. Every one of them had 10 guys … It’s amazing that I am still here. I ask the good lord every day, ‘Why?’” Later in life, following his retirement, Jenner was diagnosed with PTSD and recently received successful treatment through the RTM protocol. Now, he explained, he talks with other veterans struggling with PTSD, “giving them a little hope that there is hope.”

Nearly 300 masked marchers hiked the 2.2 miles past outdoor diners following the speeches and ceremonies that nearly did not happen due to the pandemic. The post – which has grown from about 170 to 245 members in the last four years – put its heart and soul into a cause the community, including city officials, could not deny. “People want to be part of something,” Gies said. “The number of younger members we are generating because we show we care is huge. Cause, purpose. It’s amazing to see what has happened with what started out as a little walk in Winter Garden. Fla.”