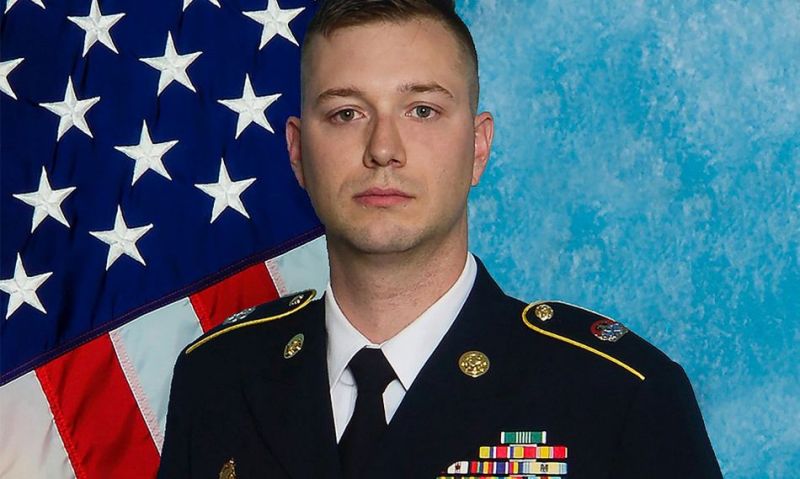 Amid their grief, the parents of Staff Sgt. Chase Rauchle took immediate action to help prevent another Nevada National Guard member from dying by suicide.

The Chase Rauchle PTSD (Prevent & Treat Stress & Depression) NOW! foundation was established following the loss of Chase with the mission to address and reduce suicide among military servicemembers and veterans who suffer from the effects of trauma, stress and depression from combat and reintegration into civilian life. The effort of the organization is to conduct research and support new, existing treatments that reduce the effects of post-traumatic stress disorder (PTSD) and bring those resources to the military servicemembers, and to educate the public about this epidemic and identify solutions to help to save lives.

About two months ago the foundation took a significant step toward its mission with a donation of $200,000 to the Nevada Department of Veterans Services that will fund the positions of two additional psychological health counselors within the Nevada National Guard to care for the men and women serving.

“It became very apparent with my son’s experience that the armed services in general, and especially the National Guard that he was a part of, is just woefully understaffed and underserved for those that carry the issues of stress and depression back from the battlefield,” said Craig Rauchle, father of Chase and founder of PTSD NOW! Craig said that about 4,500 men and women serve in the Nevada National Guard with only three psychological counselors to care for their mental health needs. “We have now effectively doubled the number of people that are providing support. If we can save the life of one individual, it’s worth it (the cost). And if we can save hundreds of individuals, it’s beyond good. We want to try to make a difference and create a model that we can use across the United States.”

PTSD NOW! is a nonprofit that was created through grassroots efforts of individuals supporting Craig and his mission by providing both time and money. One of those individuals is Steve Lenzi, a Nevada Legionnaire and friend of the Rauchle family who is on the foundation’s board.

“The difficulty you have with problems associated with mental issues, PTSD, there is that warrior culture that prevents a lot of our people from seeking help at the right time,” said Lenzi, a U.S. Marine from the Vietnam War era. “I’m interested in overcoming that. Personally, I’m interested in trying to affect the culture in a way to not remove the warrior mentality necessarily but certainly to remove any sense of stigma that people would have coming forward.”

Chase deployed to Afghanistan twice with the Nevada National Guard as a gunner and battled PTSD as an aftermath of his service. Despite many attempts to seek help, the husband and father of two young children took his life on Sept. 9, 2019.

“We began with this worst news that anybody could ever receive,” Craig said. “We tried to help our son to the extent that I was even providing cash for him to go see a therapist confidentially. But he was so nervous about sharing his name or details because he thought it would make him unfit for duty. And he wanted a career in the Army National Guard. In essence the Guard meant more to him than his own life. Unfortunately.”

Like many, Craig had little understanding of PTSD and how to help his son. But since the loss of his son and starting a foundation to honor him, “we’ve learned a lot through this journey, this process. I wish only the knowledge that I have gained since I would have had then.”

To get an understanding of PTSD and how to support America’s military men and women suffering from it, Craig has met with a variety of individuals – active-duty military personnel who contemplated suicide, colonels, major generals, chaplains, public affairs officers, psychological counselors, spiritual counselors, those involved in soldier resiliency, VA staff, SEAL Team leaders, those who provide PTSD treatment therapies like Eye Movement Desensitization Reprocessing, and more. One of the first meetings he had was with Maj. Gen. Odra Berry, adjutant general for the Nevada National Guard, and his direct reports. “He shares our passion in trying to help and make a difference in the men and women that serve today,” Craig said.

“The common denominator that we found is that many of the men and women don’t feel comfortable being in uniform and going to an outside counselor or psychiatrist. They don’t want to be sitting in the waiting area, with their uniform on, with a 12-year-old that might be in there for some other issues in their life. It’s not very comfortable for them. And most of the outside counselors don’t accept the insurance that’s offered through the military. Oftentimes these are often people who can provide more advance treatment for PTSD, TBI. So generally, what happens is, they don’t get any help.

“We believe that therapy needs to be behind the gates where it’s a comfortable setting for soldiers, whether they’re active duty, reservists or vets, to be able to go and feel as though they are within their peer group. They feel more comfortable in being able to communicate what they are having to deal with.”

For some insight on the effects of PTSD, Craig recommends reading the book “The Body Keeps the Score” by Bessel van der Kolk M.D. He said that it provides “a good understanding for the types of traumas that people experience and when that trauma continually relives itself in their life every day adds to this alienation, stress and depression that they fall into and then ultimately results in them considering to take their lives.

“Those that are dealing with PTSD, a movement out of the corner of their eye brings them right back to being a gunner in Kabul and seeing an insurgent moving that looks like a rifle in his hands. Those kinds of things continue to keep coming back let alone dealing with IEDs in the roadway, casualties … these are things that need help and attention.”

With a goal to carry its model beyond Nevada, PTSD NOW! is currently pursuing opportunities in other states to help provide resources to National Guard units. “We believe we’ve got a good formula; we believe that we’ve got a success that allows us to visit Washington (D.C.) and maybe have an opportunity to role this out across the United States.”

Until that time comes, Craig said he will continue talking about mental health issues and making a difference in the lives of military men and women through the Chase Rauchle PTSD NOW! foundation.

“This is what I will be doing for the rest of my waking days.”