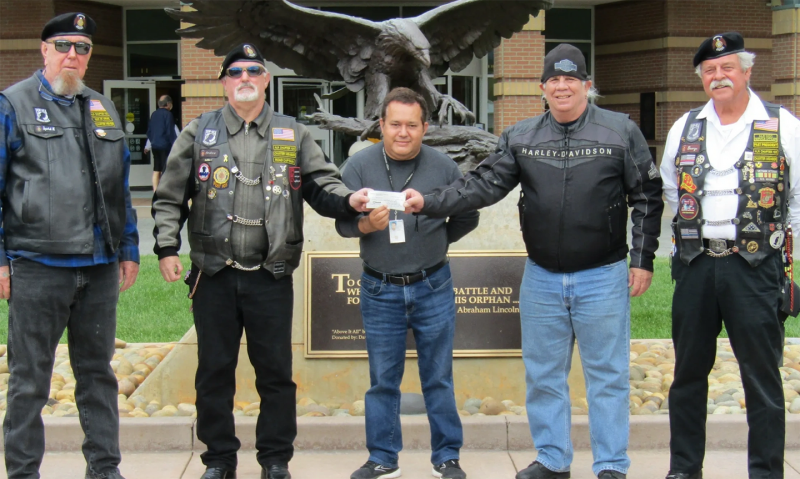 In 2020, American Legion Post 105 and its American Legion Riders chapter in Redwood City, Calif., wanted to raise funds for the VA Palo Alto Healthcare System – specifically for its suicide-prevention efforts. They were able to stage a 22-mile ride from the post to the hospital, but were never able to make a point of contact at the facility.

So the $1,600 they raised ended up going to another nonprofit that raises awareness for post-traumatic stress disorder.

“But I really wanted to keep it in our area to help OUR veterans,” said Post 105 Commander George Smith, the founder and a past director of ALR Chapter 105. “And after about a month we finally got a contact (at the Palo Alto VA) that we could donate the money to.”

So Post 105 and its Riders went at it again this year, and in mid-October more than 40 motorcycles – ridden by Chapter 105 Riders and members of the Golden Gate HOG #3923 riding group – again made the 22-mile ride from Post 105 to the VA facility, bringing with them a check for $3,750. The money came from donations from Post 105’s entire American Legion Family, as well as other area riding groups.

The check was presented by Smith, Chapter 105 Road Captain and Sons of The American Legion Squadron Commander Andrew Trapani, Chapter 105 Sergeant-at-Arms Ken Pearson and a HOG #3923 representative; the money will go specifically to assist the facility’s suicide-prevention program.

Palo Alto VA spokesman Michael Hill-Jackson told the RWC Pulse it was the first time that he remembered receiving a donation earmarked for the suicide prevention program. “Donations like these are very important and can really help us to do more,” he said.

Learning that their donation was the first of its kind to the Palo Alto VA “makes us feel terrific,” Smith said. “I know it’s a small contribution. But just knowing that we’re contributing to our fellow brothers and sisters that are having a hard time – and possibly maybe thinking of taking their own lives – if we can just prevent one, do one little thing, it makes a difference.”

Smith praised his entire American Legion Family for their efforts contributing to the donation, as well as the effort of Trapani. “He makes sure we get from Point A to Point B safe,” Smith said.

Looking ahead to 2022, Smith has set a goal of raising $10,000 next year. “Every time you do something to help a fellow veteran, it makes you feel good,” he said.