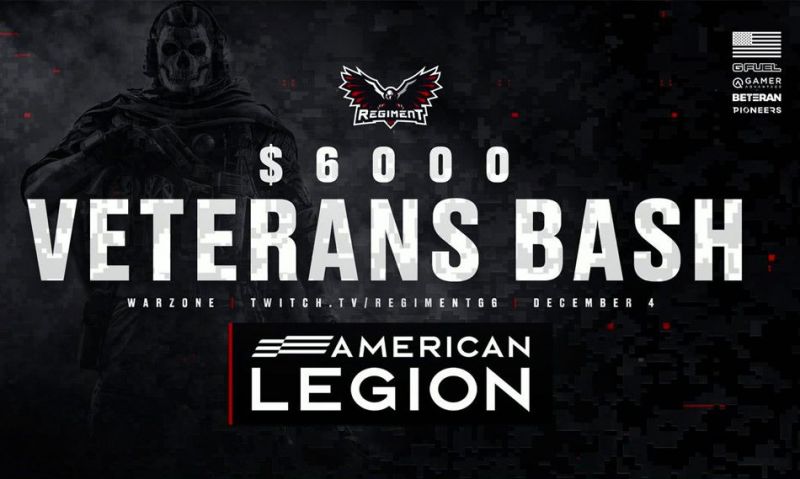 On Saturday, Dec. 4, The American Legion is teaming up with Regiment Gaming to host a military gaming tournament with about 25 professional gamers and 40 veterans and servicemembers. The Veteran’s Bash Tournament is an online Call of Duty: Warzone tournament where veterans and servicemembers will have an opportunity to play with celebrity pro-gamers and compete for a cash prize of $6,000.

Veterans and servicemembers can apply for the chance to play in the Veteran’s Bash Tournament. Fill out the tournament application here. And watch the tournament streamed live at Twitch.tv/RegimentGG on Dec. 4 from 5-9 p.m. Eastern. You do not need a Twitch account to view it. It can also be viewed on Checkmate Gaming.

Regiment Gaming’s mission is to unite veterans and servicemembers through the power of video games “to help combat veteran suicide,” said Chris Earl, a U.S. Marine veteran and founder/CEO of Regiment Gaming. “Gaming is a big stress relief that a lot of veterans turn to for coping with physical and emotional trauma. It helps them out a lot.”

The American Legion’s partnership with Regiment Gaming is an opportunity to engage with younger veterans in this platform where they are active and find camaraderie. Andre Andrews, third vice commander at American Legion Ronald Reagan Post 283 in Palisades, Calif., is a gamer himself and is excited that The American Legion is getting involved with it.

"Gaming is a great way to connect with veterans," said Andrews who currently plays the game Call of Duty with other Legionnaires. “We have found it to be a great connecting tool for us. What I like about gaming is the community, the camaraderie, friendship, brotherhood, sisterhood … I feel like I’m back in the military when I’m gaming.”

Andrews said that technology is leading the way for younger veterans when it comes to gaming. So The American Legion’s opportunity to get involved with Regiment Gaming is a way “to generate new younger members within this great organization and using gaming as a recruitment apparatus,” he said.

Regiment Gaming is the largest military gaming community in America. It has united over 7,500 veterans and servicemembers of every U.S. military branch through video games, and has raised more than $60,000 for military charities and organizations through tournaments.

What Earl likes about gaming is that it “helps people. It’s pretty underrated, it’s a multi-million-dollar business, a lot of people don’t understand that, and they think it’s a toy. It’s very therapeutic. It’s saved a lot of lives. And it’s fun. It’s just a way for you to connect with your friends that are thousands of miles away that you haven’t seen in a long time.”

The Kansas City Pioneers, a multi-discipline esports team in Kansas City, is also a sponsor of the Veteran’s Bash Tournament. One of their professional gamers, Josiah Berry, will be participating in the tournament.