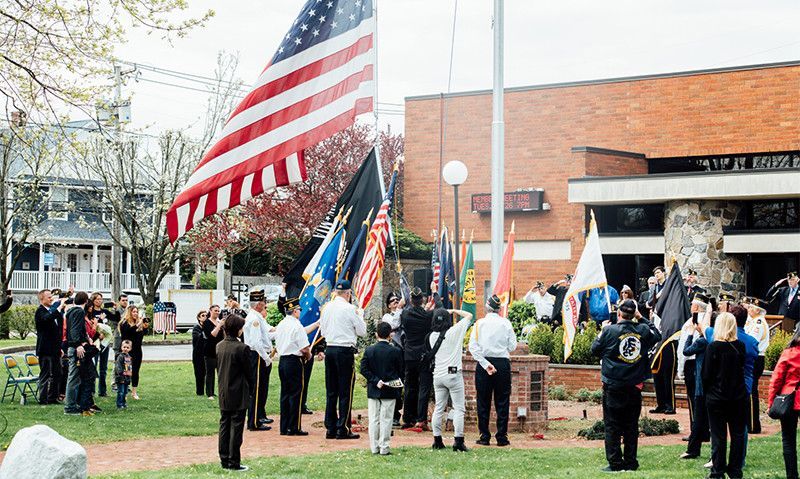 “All through school, he was the protector of those who needed protecting,” said his father, Bruce Blanco, a member of the Sons of The American Legion and Legion Riders at Post 1244 in Greenlawn, N.Y. “I didn’t know about what he did until after the fact. People came to me with their stories. I heard stories about how many people he helped. At his wake, the first three rows were all females. Each one came to me with a story.”

Michael shielded kids from bullies. He secretly gave a high school cafeteria worker money out of his own pocket so other students would have lunch. On one occasion, while riding his bike, he saw a man jump out of a van and try to abduct a girl.

“She said to me, ‘I don’t know where he came from. He came flying off his bike, pushed the guy back into the van and took me away to safety,’” his father recalled. “I would hear stories like this a lot. He was unspoken but made an impact on people’s lives. He was an amazing man.”

“At that time, I became aware of the epidemic facing our veterans and military members. I was heartbroken to learn about it and ashamed that I did not know about it,” said Hertell, who began researching the problem, looking for answers. “I kept coming back to the stigma of mental health and suicide, and seeking treatment within our warrior culture was preventing veterans and servicemembers from taking advantage of programs that are available for suicide prevention. That’s when I decided we should have a symbol to rally around, a symbol to remember those we lost, a symbol to unite and a symbol to show respect for their families.”

Hertell, a member of Post 336, designed the flag. He incorporated elements of the POW-MIA and Gold Star Mothers flags into his design of the black-and-yellow SAR flag. The black symbolizes mourning, while the gold represents the veteran or servicemember who died by suicide. At the bottom, it says, “Honor the fallen.”

Attending the ceremony were more than 120 American Legion Family members, including some from as far away as North Carolina, Blue Star Mothers, law enforcement officers and other supporters.

By 2019, Hertell had created the flag and started conducting outreach for support. He found it the first place he looked — at The American Legion. After a presentation at the Greenlawn post, Blanco told Hertell about his son and vowed his support.

“The support of The American Legion is tremendous,” Hertell said. “To have their help and support is tremendous and we really appreciate it.”

Blanco served in the Suffolk County Police Department for more than 20 years. In his introduction, ceremony emcee and Post 336 Chaplain Fred Nielsen noted that Blanco “was driven to protect and to serve, which is what his son, Michael, undertook to embrace as a U.S. Marine.”

The ceremony continued as Nielsen asked everyone to say Michael’s name in unison followed by 22 seconds of silence, broken by the ringing of the SAR bell, stationed near the flagpole.

“It’s very humbling to say the least,” said Blanco, who became a member of the Sons via his grandfather, who served in the Army during World War II. “One of the reasons I joined The American Legion was to help veterans. I never want to see another family go through what mine has.”

Blanco is the vice director of the department Riders and the director of Post 1244’s Riders chapter. “By doing this, I am keeping his memory alive.”

“We are here to honor the lives and selfless service of our veterans and servicemembers,” said Wong, who is retired from the New York Police Department. “Also, the boldness of all of us here today who can make a positive impact remembering veterans and military members lost to suicide. We must destigmatize suicide and mental health issues. Access to mental health resources should be equal to those for physical health.”

Randall Eng, commander of the Post 1291, noted the significance of the day.

“This is a very significant event in the history of The American Legion and our community,” said Eng, who served in the National Guard from 1970 to 2004. “We are finally gathered together to honor the memory of those who passed by suicide. This situation deserves the attention it is receiving today because we know that every household, every family is affected in some way by this phenomenon that continues to take our people from our lives.”

“Our words will be hollow and forgotten if not followed through with immediate profound action,” he said. “That’s what brings us here today: action. As today’s ceremony fades into the twilight of our memory, the SAR flag will remain, forever vigilant on watchful alert as if on guard duty. It will be a perpetual reminder that together we can end veteran suicide.”

For his part, Hertell isn’t stopping at one flag. He envisions creating a national holiday — Sept. 22 — as Veterans Suicide Awareness and Remembrance Day. That date was chosen because September is Suicide Awareness Prevention Month and 22 represents the daily loss of veterans to suicide.

For Blanco’s family and others who have lost a veteran to suicide, their loss is felt 365 days a year. Yet the ceremony brings a ray of hope to the epidemic.

“What I’m hoping the general public is able to do is recognize that we have a problem in the military,” Blanco said. “We have 22-plus military members a day committing suicide. That’s unbelievable. They don’t know where to get the help or they are embarrassed.”