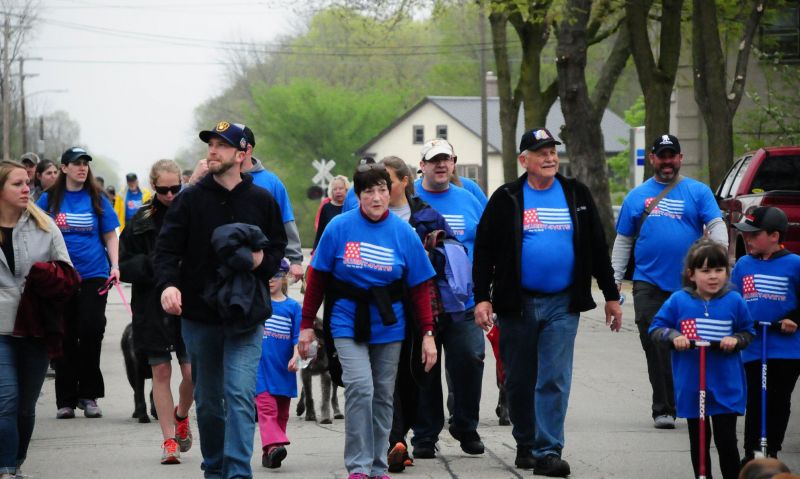 An avid runner, American Legion Auxiliary Unit 355 member Amy Luft would use the route between Post 355 in Grafton, Wis., and Post 288 in nearby Cedarburg for daily runs.

The scenery along the way planted an idea in Luft, one that now has raised more than $60,000 since 2016 for veteran assistance efforts. Sweats4Vets, a collaboration between Units 355 and 288, is a 2.5-mile walk that debuted in 2016 and will continue this weekend, departing Post 288 and finishing at Post 355.

“It’s a very scenic area (along the route),” said Luft, Wisconsin’s 2nd District Auxiliary president and 2022 American Legion Auxiliary National Convention chairman. “I thought to myself, ‘Gosh, they talk so much about the American Legion Family and doing things together. We should really do something between these two vibrant posts. That’s kind of how the thing started. I pitched the idea to a friend over at Cedarburg that we should host some kind of walk.”

The first Sweats4Vets walk took place on Armed Forces Day in 2016 and on the same day the next three years.

“Honestly, we didn’t know what to expect the first year,” Luft said. “We put our goals really low and were like, ‘We will get 50 people to take part in this. Well, we had over 100 walkers the first year, and it just keeps going.”

But then came COVID-19. “2020 for sure was cancelled,” Luft said. “We thought about having something last year. We had it scheduled, but then things were still up in the air … so we thought we’d cancel May and move it to September. As we got close to December, we felt … we utilize a lot of our local businesses for support and donations. And so many of them were struggling from the devastating year before. And we just thought, ‘Man, we can’t hit them up right now’ because we wanted to keep the small businesses going. And to have them make a donation at this time to help our cause – though I’m sure many of them would – we just didn’t want to tap them out. So we just decided collectively as a group to hold on for one more year.”

But this year’s event is back on, again on Armed Forces Day. “I can’t tell you how great it is to be able to again be able to do a community event that, No. 1, the community so much looks forward to,” Luft said. “But to be able to give back to our veterans in a way we were not able to do in the last years is very, very meaningful.”

Sweats4Vets charges a registration fee of $35 in advance and $40 on the day of the walk. Funds also are raised through pledges; those who raise the highest amounts are awarded prizes. Walkers can bring leashed dogs, scooters, wheelchairs, wagons and strollers.

Post 355 will host an after-party following the walk that will include a brat fry and live entertainment.

Funds raised each year go to a different in-state nonprofit or agency that assists veterans. Past recipients have been the Department of Wisconsin’s Camp American Legion, Stars and Stripes Honor Flights, Healing Patriots and Patriot K9s of Wisconsin.

“To be able to bring awareness and support to a cause that so badly needs it right now, coming off this devastating pandemic … to enlighten people and support a cause that very needed right now, I can’t tell you how great it is to get back doing things right now,” Luft said.