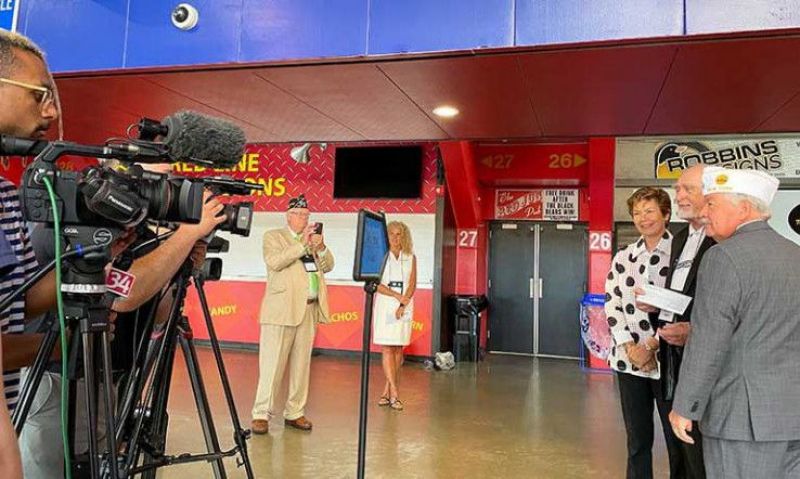 The Department of New York presents a $100,000 check to the Research and Recognition Project to fund its PTSD treatment study during the department’s 104th convention in Binghamton.

The American Legion Department of New York is taking action to address and prevent veteran suicide and homelessness. The department announced its new initiative July 15 at its state convention in Binghamton – a $1.5 million fund that will award grants to state nonprofits that have programs directed at veteran suicide and homelessness prevention. The first two grants have been awarded.

A $100,000 grant was awarded to the Research and Recognition Project to fund a one-year pilot project to expand and measure its Reconsolidation of Traumatic Memories ProtocolTM (RTM ProtocolTM) treatment for veterans suffering from post-traumatic stress. The project will certify 30 licensed counselors in the state to administer the RTM ProtocolTM to approximately 400 veterans and their family members, and measure the remission of PTS and symptoms.

The Research and Recognition Project is a nonprofit founded by Dr. Frank Bourke in Corning, N.Y., that developed the RTM ProtocolTM therapy that “uses a short visualization process to retrieve and alter the memory.” According to the Research and Recognition Project, in clinical trials with RTM ProtocolTM, the treatment “is remitting PTS diagnosis and all PTS symptoms over 90% of the time in less than five hours, using no drugs.”

A $34,450 grant was awarded to the Veterans & Community Housing Coalition (VCHC) to furnish its Foreverly House, a home for homeless women veterans with children. The Foreverly House in Ballston Spa is a two-story home built specifically for this group. The home provides women veterans and their children with stable housing and access to VA health care, mental health resources and other support services needed, including help preparing for a successful transition to independent living within the community. In their grant request, VCHS wrote that 70% of homeless women veterans are mothers. “Often, these veterans do not seek assistance from VA because they fear their family will be separated, the housing options may be unsafe for children, or they will lose custody of their children if they ask for help. Living without the support needed, these moms spiral downwards, leading to a homeless situation and, even more serious, suicide. Imagine the challenge of being homeless with children after having faithfully served your country. It shouldn’t happen to any veteran, especially to a veteran mom and her children.”

“The American Legion Department of New York is using this fund to provide grants to organizations and projects that make a difference in the lives of our veterans still suffering from what happened to them while serving their country,” outgoing Department of New York Commander Frank LaMarsh said on the department’s website. “Our inaugural grants address the startling statistic that 22 veterans are taking their own lives every day, and that women veterans with children are the most vulnerable segment of our veteran homeless population.”

The Department of New York’s veteran suicide prevention initiative aligns with The American Legion’s Be The One campaign, which aims to raise awareness about the veteran suicide rate and empower everyone to take the initiative to save the life of a veteran who is at risk. The American Legion wants you to Be The One to save one veteran. Learn more about the campaign at legion.org/betheone.