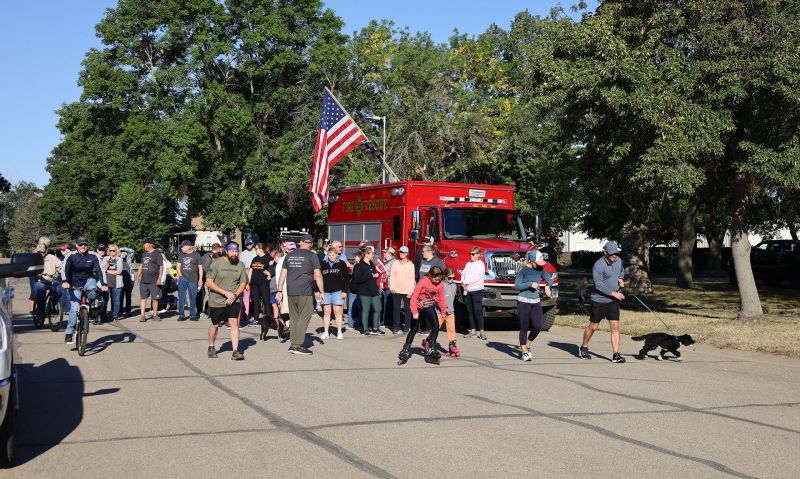 September is National Suicide Awareness Month and American Legion Burrows-Young Post 114 in the small town of Volga, S.D., wanted to bring awareness to the number of veterans a day who die by suicide, and to the overall mental health needs for veterans. The post was successful in its mission.

“I think people were just blown away at the stats of the (veteran suicides) a day,” said Post 114 Vice Commander Philip Egeberg. “I’m just so proud of our community and how much caring was shared by the community with the donations and overall support.”

The 2.2 for Heroes event was held at the Volga Veterans Memorial where participants walked, ran, biked, roller bladed or even rode a motorized scooter as one older veteran did, for 2.2 miles. When they crossed the finish line, they received a dog tag that featured the American flag, 2.2 for Heroes and the Legion emblem.

A suggested donation of $22 was asked of each participant, and T-shirts also were available for $35.

“People would walk up and would hand us a $50 or $100 and they would say, ‘keep the change,’” said Egeberg of the more than 70 participants. “It was really heartwarming. Everybody that said keep the change, they were looking to make a difference.”

With veteran suicide prevention at the forefront of Post 114’s cause, prior to the start participants heard from a widow of a local veteran who took his life about 10 years ago. “It was a tearjerker because their daughter was there (for the post event), and he took his life four days before he was supposed to walk her down the aisle,” Egeberg said, adding that when the post advertised about the event on Facebook, “I don’t think anything (the post has shared before) has gotten reshared, or commented on, more than this event. The support was amazing.”

Post 114’s vision to make a difference by reducing veteran suicide aligns with The American Legion’s “Be the One” campaign, which aims to reduce veteran suicides by empowering everyone to save the life of one veteran. The American Legion wants you to “Be the One” to ask veterans in your life how they are doing, listen when a veteran needs to talk, and reach out when a veteran is struggling.

“We are very proud of what we have done,” Egeberg said of Post 114’s 2.2 for Heroes. “This was uniquely different for us because we wanted to make an impact. We all talked about it that if our efforts save one life it was worth it. And I hope it does. I hope it saves many more.”

To get 2.2 for Heroes underway, a committee of five was formed that included Egeberg, Post Commander Joel Doyscher, Post Adjutant Roger Anderson, Post Finance Officer Joana Sykora and Post Newsletter Editor Kim Chase. They “were the key folks that made this event successful,” Egeberg said of the committee members. As well as the community. “We are blessed as an American Legion post to be surrounded by five-star citizens, business leaders, local government officials, a supportive school system, volunteer fire department and law enforcement that care about the well-being and mental health of all veterans.”

Egeberg said that when the post went to local leaders, first responders and businesses for support, “they were all for it. They said, ‘We’ll support you.’ We were given discounts or free stuff everywhere we went. I think expenses (for the event) are almost zero.”

Support also came from District 5 Commander Matt Lagerstrom, who donated a significant amount toward Post 114’s cause to help surpass its fundraising goal.

“We were just blown away that Matt would do that for us,” Egeberg said. “(Veteran suicide prevention) means a lot to him too.”

Post 114 plans to make 2.2 for Heroes an annual event. “We are already talking about next year and doing it bigger and better,” Egeberg said. Next year, the post hopes to have someone onsite to discuss warning signs of suicide, as well as work more closely with the state regarding suicide prevention efforts.

“We really feel good as a post that we were able to do this. We have a nice little post with good people and a good community. I think that’s the big thing is I can’t say enough about the Volga community.”