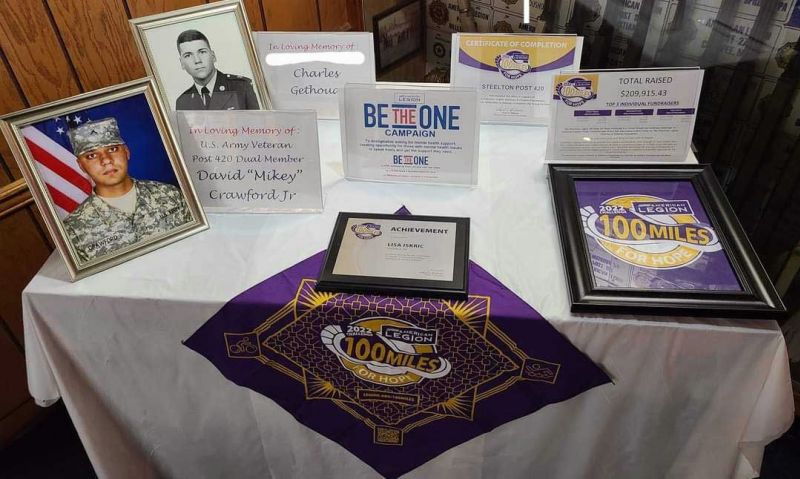 American Legion Post 420 in Steelton, Pa., hosted its first Finish Line Festival in 2020 to celebrate member participation in the Legion’s 100 Miles for Hope fitness and wellness challenge. When one of their members died by suicide in 2021, the festival became an honor to him while still recognizing the accomplishments of 100 Miles for Hope participants.

Post 420 and Legion Riders Chapter 998 in Lawnton, Pa., hosted its second annual Spc. David “Mikey” Crawford Jr. 100 Miles for Hope Finish Line Festival on Sept. 17 at the post. The event raised donations for The American Legion Veterans & Children Foundation, charity of 100 Miles for Hope, and brought awareness to the Legion’s “Be the One” campaign.

“The ‘Be the One’ campaign for us just really hits home because one of our own took his own life,” said Unit 420 President Lisa Iskric, who led Post 420’s efforts to raise funds for and awareness of the 100 Miles for Hope challenge. “When The American Legion came out with the ‘Be the One’ campaign, we were like, ‘This is perfect. Let’s get on board.’”

The campaign aims to raise awareness about veteran suicide and empower everyone to “Be the One” to save the life of a veteran who is at risk. Learn more at betheone.org.

The celebration and remembrance event featured door prizes, raffles, food, entertainment and in-kind donations. A table featured a photo of Mikey, along with one of his uncles who also served and died by suicide in 2020. It also had 100 Miles for Hope incentives that Iskric won for raising $5,546 for V&CF – an autographed Jimmie Johnson 100 Miles for Hope shirt and a racing helmet autographed by Chip Ganassi Racing drivers Jimmie Johnson, Alex Palou and Tony Kanaan.

Iskric said the V&CF donations were made possible by her just asking, promoting on the post, unit and Sons of The American Legion Squadron 420 Facebook pages, and by her friend Bob Richards of nearby Squadron 730 sharing at district meetings what Post 420 was doing for 100 Miles for Hope.

“I just made sure that everyone knew exactly what the Veterans and Children Foundation is and what it does,” he said of the fund that supports disabled veterans and military families with children in the home who are in financial need. “People are excited to be a part of something that they believe in. I think the main thing is just getting the message out there, getting the focus out there of what this money goes to.”

Iskric said she was blown away by the amount of support from Legion Family statewide, including a $1,000 donation from her former Auxiliary Unit 272. “It really is the Legion Family at its finest around here.”

The support from the Pennsylvania Legion Family and community members was visible at the Finish Line Festival. More than $2,000 was raised for V&CF and to support veteran suicide prevention efforts.

“People were just really moved by what we are doing (with ‘Be the One’ and veteran suicide awareness),” Iskric said. “Mikey was a personal friend of mine. I really wish that he wasn’t the reason that we are doing this event. But his parents conveyed that we are turning a tragedy into a triumph. His dad has said to me that even if this event helps one person, that’s a win. That is our focus now with ‘Be the One’.”

Mikey’s parents, siblings, aunts, uncles and more were in attendance at Saturday’s festival. His father, David Crawford Sr., is a Post 420 member, and his mother is a headquarters post member. “It’s not easy to lose a child in this way and also his brother-in-law in the same way. I was really glad that we could have the event, he could let out all of his thoughts,” Iskric said of David Sr. who spoke about his son at the event. “It made me personally realize why we do what we do. If there is one person that might be having a bad day, I want them to know that we’re here, that they can come to us.”

Iskric said Post 420 has been raising awareness about mental health issues for a long time, adding that there’s an area inside the post where buttons and flyers with the VA Crisis Line 988 number on it are available for veterans to take. Now, the “Be the One” logo is there to start the conversation to save a life.

“The uncomfortable conversations, we want to make them more comfortable,” she said. “We are focused on being a safe place for veterans as well as their families to come. If they are having a mental issue or a mental break that they have us to speak to. Or if they want to come into the canteen and play tunes on the jukebox rather than contemplate suicide or take their own life, that’s really the goal.”

A few years ago, Post 420 received a phone call from an out-of-state veteran in crisis. Iskric spoke to him for a while and gave him the VA Crisis Line number to call. “These are real issues and real problems that we want to make sure we recognize,” she said. “And know what to do, know what to say and know how to Be the One. That’s what we’re doing … we’re being the one.”

Iskric reflected on a photo taken during the Finish Line Festival of Mikey’s family, all smiling. “That really meant a lot to me because I’m sure there are many other days that they are not smiling. It’s really nice to be able to do this event for not only them but anyone who might need some help or support as well.

“The event as a whole is a true testament to the Legion Family and what we do. We do what we have to do for our veterans and their families.”