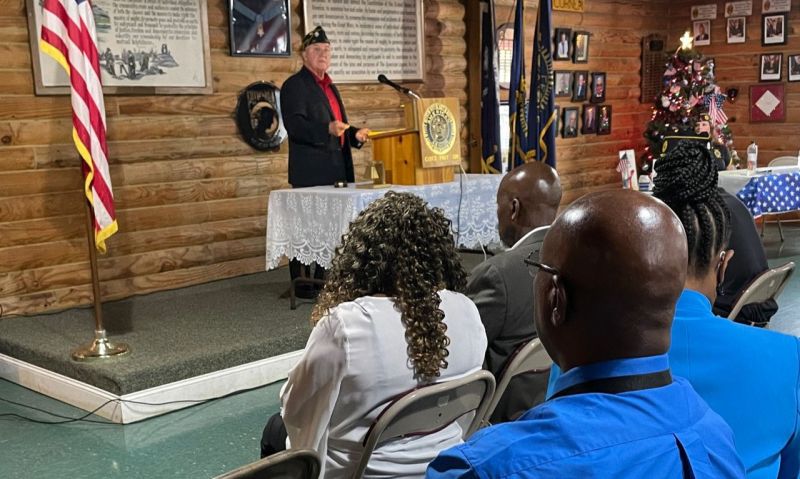 After a pause of more than two years, Ralph Bozella was thrilled to be back at an American Legion System Worth Saving event on July 11 in Columbia, S.C.

Dozens of veterans, VA representatives and others attended the town hall meeting at American Legion Post 130 in Cayce, just outside Columbia. The town hall kicked off the first SWS site visit since the pandemic canceled them starting in March 2020. During the week-long visit, American Legion volunteers and staff members will meet with VA officials to further gauge and assess how the Columbia VA Medical Center is caring for veterans in the state’s capital.

“It is a System Worth Saving, as far as The American Legion is concerned,” Bozella told roughly 35 attendees in his opening remarks. “Does the VA have problems? Yes, of course, they do. They are the largest health-care network in the United States. But let’s work together to solve those problems.”

And that is what fueled the SWS program two decades ago.

In 2003, The American Legion SWS task force initiated visits to VA facilities throughout the nation. During each visit, task force members investigate use of resources; note successes, challenges and limitations; and deliver after-action reports of their findings to Congress, VA officials and the public.

During the Columbia town hall, veterans offered a mix of praises and issues. Topics ranged from personal testimonials to questions about cancelled appointments, lost records and underperforming staff members. Air Force veteran William Livingston served in-country during the Vietnam War. A member of Post 130, Livingston uses VA now for treatment related to his post-traumatic stress disorder and tinnitus. But he recalled one night when his heart rate was racing off the charts. A VA doctor discovered that he was suffering from ischemic heart disease.

“VA saved my life,” Livingston said, adding that he was admitted immediately and stayed for 19 days. “I’ve had no problems with them all these years. I just want to thank the VA, and I appreciate what they do.”

Gene Bierman, a Navy veteran from the Vietnam War, pointed out the digital divide separating generations of veterans.

“One of the biggest headaches is handwritten notes,” he said, referring to one of the challenges of the electronic health integration. “That’s an area that needs to be improved.”

Another veteran listed off a series of issues, including four cancelled appointments he had experienced at the Columbia VA.

In response, Columbia VA Medical Center Director and Chief Executive Officer David Omura met one-on-one with the veteran after the meeting and resolved to find solutions. Serving veterans is what inspired Omura to work for VA more than a decade ago.

“I have great appreciation for our military and our veterans,” said Omura, who has been director for almost 10 years. “To me, I could not be in a better place.”

He appreciates The American Legion as a partner in working together to serve veterans.

“The American Legion and Auxiliary have been phenomenal,” he said. “It’s been a great partnership. The camaraderie, the support and the honest feedback with each other allows us to constantly get better. It’s been invaluable to our success. We’re thrilled to have the partnership with The American Legion. We have the same purpose: take care of veterans with the best care possible.”

“Normally, I run away from town halls,” said Jarvis, a member of Post 6 in Columbia. “But I wanted to see and hear this one because I thought it could be productive. And I thought some pretty good ideas were shared from different people. There were some individual issues that were thrown out there but that is how VA finds out about problems. It was an eye-opener for me.”

The American Legion is planning to conduct other SWS site visits this year. The next one is planned for September in Puerto Rico, followed by Sacramento, Calif., in October and the Bronx, N.Y., in December.

These visits are great examples of how posts can be leaders in their communities, Bozella pointed out.

“The VA is serving our local veterans,” he said. “We are a community with the VA. We are veteran advocates. We are advocating for the right things. And it should be done at the community level.”

Bozella praised Post 130 for taking the lead and hosting the town hall.

“This is what we need to be doing,” Bozella summarized. “We turn these places into community centers, and you will start to attract younger veterans and their families. In turn, they will learn about things like this.”