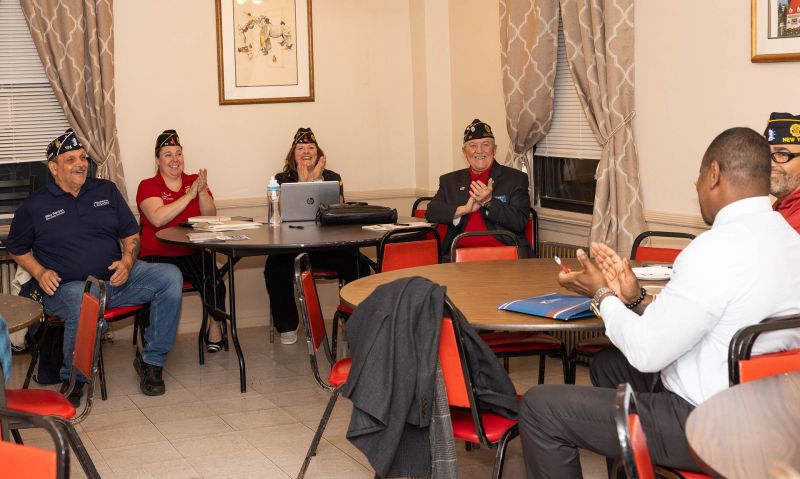 George Pasiuk spoke quietly, noting his voice has been compromised due to tongue cancer related to when he was stationed at Camp Lejeune while serving in the Marine Corps.

“They just keep turning me down,” he said. “They said I didn’t qualify. The water was contaminated. Where do you think the water went? It went into my mouth.”

Pasiuk applied three times for VA benefits to receive the full compensation he earned through his service.

And three times he was denied.

Fortunately for Pasiuk, he raised the issue during the second American Legion System Worth Saving (SWS) visit since the pandemic paused the program. American Legion representatives and Bronx VA staff listened to and addressed issues such as Pasiuk’s during the SWS town hall on Dec. 5 at American Legion Sam Young Post 620 in the Bronx.

Moderator Ralph Bozella assured Pasiuk the Legion would help him obtain his benefits, thanks to the new PACT Act under in which Pasiuk’s cancer qualifies him. The PACT Act — officially known as the Sergeant First Class Heath Robinson Honoring Our Promise to Address Comprehensive Toxics Act – became law Aug. 10, 2022. It allows certain individuals to file lawsuits and collect damages from the federal government due to their exposure to contaminated water at Camp Lejeune. (If you or someone you know may qualify, learn more information here.)

Bozella, who recently retired as Veterans Affairs & Rehabilitation chairman, directed staff at the event to assist Pasiuk. They obtained his information and will assist Pasiuk as needed on his behalf.

“We’re going to get you the help you need,” vowed Bozella, an American Legion member from the Department of Colorado. “You are going to get the help you need so you get compensated for something that happened decades ago. That’s all we hear about these days is Camp Lejeune. And this man deserves to have compensation and the right treatment for his cancer.”

It’s an example of what SWS visits were designed to do when they started two decades ago. The Legion conducts these visits to work hand-in-hand with VA medical center staff to improve health-care services for veterans.

“I appreciate the fact that The American Legion took a leadership issue in the oversight of Camp Lejeune,” Bozella said, referencing a resolution approved by the National Executive Committee at the recent Fall Meetings. “We raised awareness so our people know what is going on. There is a right way to do Camp Lejeune and a wrong way to do Camp Lejeune and we want to be sure our veterans are doing it the right way so they don’t lose any other benefits. We represent veterans with the highest-quality team. That’s what we do and they entrust us to do that.”

Veterans offered a mix of praise for and concerns with the Bronx VA medical center during the 90-minute meeting. Among other topics addressed were the ongoing impact of COVID on veterans health care, VA nursing and other staff shortages, the use of golf carts to transport veterans and more.

Gene De Francis, commander of Post 253 in the Bronx, described his experience after a car accident earlier this year. The ambulance rushed him to the nearest hospital emergency room as is standard operating procedure. “I couldn’t get out of there fast enough and into the VA,” he said.

For veterans in a similar situation, they can alert hospital staff of their service and preference for care at a VA hospital. “They are supposed to honor that, as long as it is safe for you to be moved,” advised Tiffany Ellett, deputy director for health policy in the Legion’s Veterans Affairs & Rehabilitation Division.

De Francis commended the Bronx VA medical center for the treatment he’s received before and after the car accident.

“They (VA staff) have been fantastic,” he said. “They have communicated very well and take care of issues.”

The American Legion is planning additional SWS visits in 2023. During each visit, task force members investigate use of resources; note successes, challenges and limitations; and deliver after-action reports of their findings to Congress, VA officials and the public.

“We welcome The American Legion for the visit here and any recommendations so that we can move toward better service for our nation’s heroes,” said Shawn Kingston, the chief of civic engagement and outreach coordinator at the Bronx VA. “It was very insightful.”