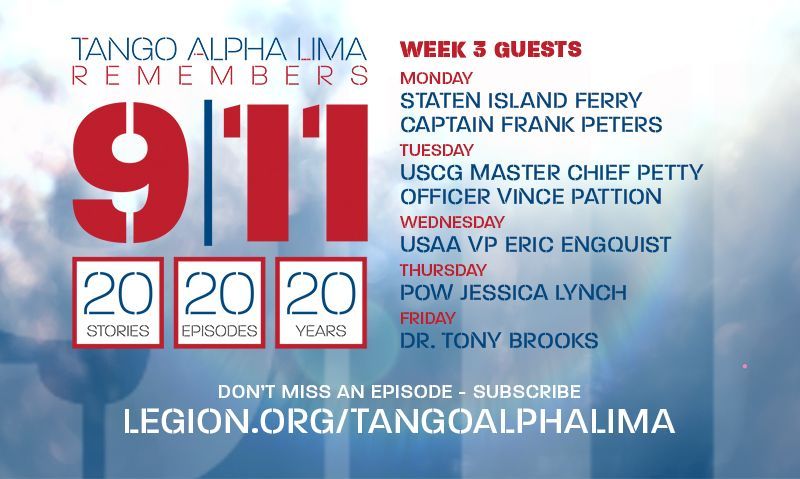 One episode of the special podcast series will release each weekday by 9 a.m. Eastern, starting on Aug. 16 and concluding on Sept. 10.

Here’s a snapshot of this week’s mesmerizing episodes:

• Monday: “We could see both towers on fire.”

Frank Peters, who served as Department of New York American Legion commander in 2014-15, captained the last Staten Island ferry out of Manhattan in the immediate aftermath of the World Trade Center towers being struck. Later that day, he ferried first responders to the scene and evacuated tens of thousands more people out of Manhattan. Listen to the audio version here or watch the video on YouTube here.

• Tuesday: “That was a very monumental task.”

Master Chief Vince Patton, who served as the eighth Master Chief Petty Officer of the Coast Guard from May 1998 until his retirement in November 2002, recalls the evacuation of 3 million commuters off Manhattan. “That task went to the smallest service at the time, the Coast Guard.” They utilized all watercraft that were available, said Patton, a member of American Legion Post 67 in Bridgeton, Maine. Listen to the audio version here or watch the video on YouTube here.

• Wednesday: “We were all in shock as we saw the second tower get struck.”

Eric Engquist, an Army infantry officer who now works as vice president of USAA Brand Management, was in Kosovo on 9/11. A member of American Legion Post 2 in Texas, Engquist recalls a significant increase in insurgent activity and the discovery of a jihadist training center in the days following the attacks. Listen to the audio version here or watch the video on YouTube here.

Army veteran Jessica Lynch, the first female prisoner of war to ever be rescued, joins the podcast to discuss her nine days in captivity, her rescue and more. “When I heard them yell, ‘Where is Private Lynch?’ that’s where it kind of hit me that I was their target, whether it was going to be good or bad,” she recalls. Lynch decided to join the military in the summer of 2001 and left for basic training on Sept. 19. Listen to the audio version here or watch the video on YouTube here.

• Friday: “You’re expecting to be ambushed at any moment.”

Tony Brooks was inspired to serve by what he calls the "holy s--- act of terrorism." On 9/11 he was an 18-year-old student at the University of Arizona who had not previously considered military service. Against his parents’ wishes, he followed his heart, signed up and joined the Army Rangers. His first mission was Operation Red Wings II, the rescue of Marcus Luttrell. Even after Luttrell was rescued, Brooks and others searched for other members of the recon team in the remote, mountainous region. “It was days later that we found them … after almost two full weeks of searching.” Listen to the audio version here or watch the video on YouTube here.

Visit www.legion.org/tangoalphalima to download each episode in this special series in audio format or watch on The American Legion YouTube channel, https://www.youtube.com/c/americanlegionHQ.