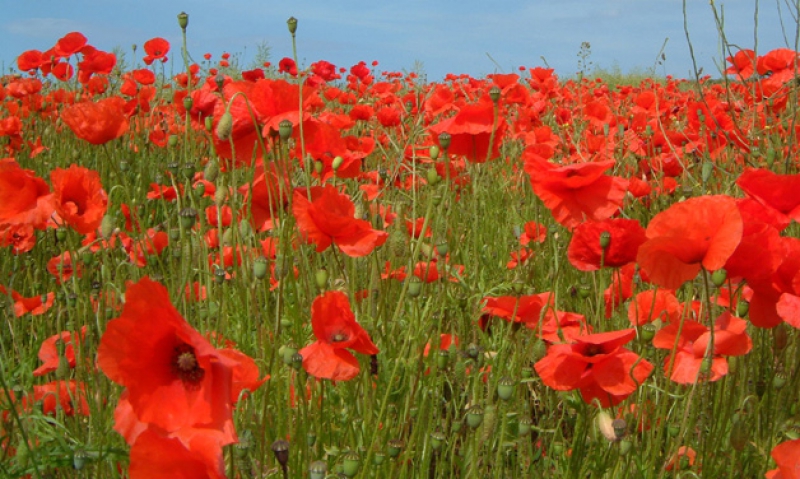 The poppy flower adorned the battlefields of Flanders Field in France during World War I, and was looked upon by those serving as a living symbol of their fallen comrades’ sacrifices. In 1920 after World War I, the poppy became the official flower of The American Legion Family to memorialize the soldiers who fought and died during the war, and distribution of poppies became a Legion national program in 1924. To this day, thanks in large part to the American Legion Auxiliary, the poppy is nationally recognized and worn as a symbol of sacrifice made by the men and women who served and died for their country during a time of war.

The Auxiliary Poppy Program has been a staple of the organization since the Legion’s 1925 National Convention when Resolution 534 was adopted, giving the Auxiliary complete charge of the program. But it is imperative to remember that the Poppy Program is an American Legion Family event where both Legion posts and Sons of The American Legion squadrons are encouraged to partner with their local Auxiliary unit to organize and promote the program, as well as distribute poppies for donations.

Millions of red crepe paper poppies are handmade every year by veterans and distributed across the country by Auxiliary and Legion members in exchange for donations totaling more than $2 million a year. Until recently, 100 percent of funds derived from the distribution of poppies went toward assisting disabled and hospitalized veterans. However, due to the mounting needs of active-duty servicemembers, Resolution 20 was passed during the Legion’s recent National Executive Committee Spring Meetings to allow donations collected as of May 9, 2013, to not only assist veterans, but also active-duty military personnel and their families with medical and financial needs. Resolution 20 also states that poppy donations collected after May 9 can no longer be used toward Legion family volunteer travel, conferences or apparel. And a post, district or department can only use the funds as outlined in the resolution; they may not be used in a general funds account that’s used for routine expenses.

Additionally, the Auxiliary is experiencing a growing demand for poppies, yet there’s an inability to fulfill that demand due to a lack of active poppy programs within Legion departments. To help meet the demands, Resolution 20 now allows the use of a reputable commercial vendor to manufacture poppies. The resolution states that a vendor must “conform with the restrictions on the use of The American Legion or the American Legion Auxiliary name and emblem.”

The Legion Family raises community awareness about its Poppy Program year-round, but distribution of poppies is prominent around Memorial Day and Veterans Day – men, women and children will wear a poppy to show gratitude to America’s fallen heroes, veterans and those currently serving in uniform. Distribution of poppies is conducted in various forms, such as outside a grocery store, post office or Wal-Mart, or by mail.

Auxiliary Unit 291 in Newport Beach, Calif., recently raised $14,000 for its poppy program by mailing donation envelopes with poppies in them to all 6,000 unit, post and squadron members. The yearly mailing “is an opportunity to make a donation via the mail since not all members are able to attend meetings or events,” said Margaret Myles, Unit 291 president. “The purpose (of the poppy) is to remind our members the reason why we are The American Legion, and to honor those who have served, those who are currently serving and most importantly, those who have lost their lives in the line of service to our nation.”