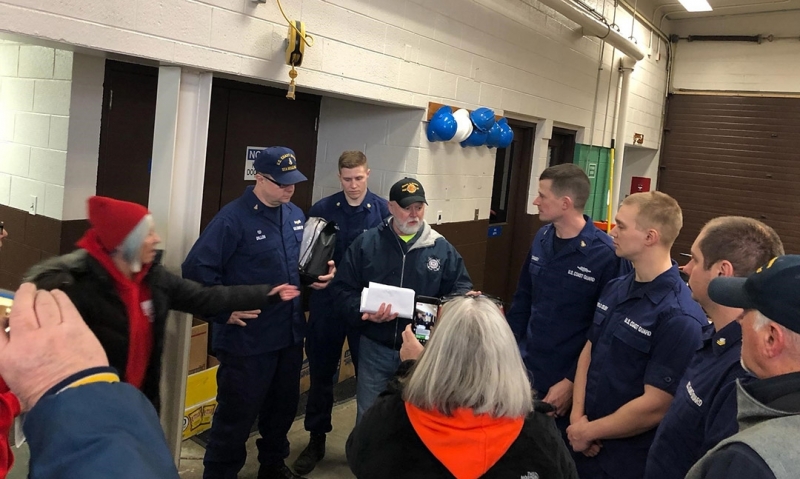 On Jan. 25, the longest government shutdown came to an end, stopping what had been more than a three-week gap since 800,000 federal workers had been paid.

Among those were more than 41,000 active-duty members of the U.S. Coast Guard. The American Legion was able to provide more than $1 million in non-repayable grants to approximately 1,713 Coast Guard families with 3,170 children.

But across the nation, American Legion Family members also did their part to assist local Coast Guardsmen, raising funds, providing free meals and delivery much-needed household items and gift cards to those servicemembers.

Edward C. Headman Post 217 in Wyandotte, Mich., was one of those posts stepping up, purchasing 33 $100 Visa gift cards to distribute to all the personnel at Coast Guard Sector Detroit. The post also teamed up with Downriver for Veterans to collect enough food and toiletries from the community to fill up a box truck that also was presented to the Coast Guardsmen.

For Post 217 Commander Mike Huber, the cause was very personal. His son-in-law, Boatswain's Mate 1 Gerry Rohrer, is an instructor at the U.S. Coast Guard Training Center in Yorktown, Va.

“It really gets emotional. It’s our oldest daughter, and they’re struggling,” Huber said prior to the end of the government shutdown. “He said his biggest battle every day is he goes in there with a couple hundred kids, young recruits, with no money, no income. They’ve got car payments. They’ve got mortgages. This stuff is real. It is difficult as a parent to see one of your kids go through that.”

Huber said the fundraising and collection efforts included educating those in the community that Coast Guard members weren’t getting paid because they were under the Department of Homeland Security, not the Department of Defense. “No one had a clue. They just presumed they were getting paid,” he said. “That’s what got the ball going. And it just kept growing.”

The following are other examples of American Legion Family members coming to the aid of their Coast Guard brothers and sisters, as well as federal workers, during the shutdown.

California. In Vallejo, American Legion Post 550 moved quickly to help area Coast Guardsmen. The post presented $2,000 in $50 gift cards to members of U.S. Coast Guard Station Vallejo. “We needed to do a little bit to help. We had to do something for these guys,” Post 550 member Gary Blackburn told the Times-Herald.

Vallejo City Councilmember Hakeem Brown attended the presentation, which was made to a Coast Guard captain representing the Coast Guard station. “He was very thankful,” Brown told the Times-Herald. “He appreciated the fact that (the Vallejo veterans) were trying to make sure they (the Coast Guard members) were being taken care of.”

Post 550 also helped facilitate 50 Coast Guardsmen applying for American Legion Temporary Financial Assistance grants and plans on collecting items from a wish list provided by the Coast Guard that included items such as diapers and toiletries.

Delaware. In Millsboro, American Legion Auxiliary Unit 28 purchased approximately $1,500 in Walmart gift cards for area Coast Guard members. The intention for the gift cards was “so people can get their food there and whatever, and gift cards from Wawa so they will be able to put gas in their cars to go where they need to go,” Linda Shelly, president of Unit 28 Auxiliary, told the Delaware State News.

Maine. A breakfast fundraiser hosted by Charles E. Sherman Jr. Post 36 in Boothbay Harbor raised $2,000 for members of the Coast Guard. “The community has come together so well to fill the gap,” Post 36 Commander David Patch told the Boothbay Register. “We recognized that we all had to step up within a couple of weeks after Washington demonstrated their inability to get their act together.”

Adam Smart, Officer-in-Charge of Coast Guard Station Boothbay Harbor, told the Boothbay Register that “We always knew this was a special community. But we’ve been taken aback by the outpouring of support. It’s overwhelming. A simple ‘thank you’ is not going to cut it.’”

And in Camden, Post 30 donated the proceeds from its pancake breakfast to the Coast Guard despite the shutdown having ended two days earlier.

Post 30 member Jeff Sukeforth told the Penobscot Bay Pilot that the effort was “one veteran to another. We want to do what we can for them.”

Michigan. In Hancock, Alfred Erickson Post 186 collected household items for the more than a dozen Coast Guard families in the area impacted by the shutdown. “They're continuing to serve, they're serving our country and they keep going on, and we should at least be able to help them out as much as we possibly can, take a little bit of a strain off of them,” Post 186 Commander Ronald Olson told WLUC-6.

“This community is Coast Guard,” Post 28 Adjutant Larry Lambert told WZZM-13. “That’s who we are.”

In Marysville, J. Edward Mallorey Post 449 collected non-perishable foods and toiletries, and gift cards from Kroger, Meijer and gas stations to distribute to members of the Coast Guard.

“We’re veterans. To us, that’s our main reason for doing this,” Post 449 Adjutant Andie Semrow told the Times Herald. “Veterans (are) in need, and we want to help veterans. Whatever we can spare to get them what they need, to get them through the hard times that they have right now.”

New York. Post 1757 in Sackets Harbor collected food and toiletries for those hurt by the shutdown.

"I know if I wasn't getting a paycheck … you get strapped for cash and you've got to keep a roof over your head,” Sons of The American Legion Past National Vice Commander Ray Jarvis, a member of Squadron 1757, told WWNY-7. “Sometimes food seems to come last in the order of processes of keeping a roof over your head, paying your heat, especially this time of the year.”

Pennsylvania. Post 903 in Tannersville collected clothing, toiletries, baby diapers and more for members of the Coast Guard in Philadelphia. The post spent approximately $1,000 to buy the items.

"For people who have kids and everything and with money not coming in, I've got to assume that they need this badly," Post 903 member Bill Hamilton told WNEP-16.

Texas. American Legion Post 176 in Presidio worked with the West Texas Food Bank and Big Bend Family Crisis Center to deliver food to federal workers impacted by the shutdown. District 16 Legionnaires, including those from Post 79 in Alpine, also teamed up to help deliver food to nearly 200 workers in Alpine and at Big Bend National Park.

And in Houston, American Legion Post 490 hosted a fundraiser put on by USO Houston and the Tejano Veterans Association to help support Coast Guard families impacted by the shutdown. More than 200 families were helped by the event.

Virginia. More than 60 federal workers and their families attended a free meal hosted by American Legion Post 290 in Stafford County that included smoked turkey with mashed potatoes and green beans, beef tips over rice, homemade macaroni and cheese, and dozens of desserts.

"This was a lovely gesture," federal worker Kristina Hudgins told The Free Lance-Star. "It kind of restores your faith in humanity when you're in the midst of something like this, and you know your community is there for you."

And though the shutdown was over, American Legion Post 52’s Legion Family in Newport News still hosted a free homemade meal on Jan. 27 for Coast Guard members and their families. The public also was invited to attend the meal; money raised from their attendance will be used to help the Coast Guardsmen in the future.

“There's still a need to help them. Their hardships are not going to be solved overnight," American Legion Auxiliary Unit 25 President Terry Devlin told WTKR-3. “We're all one big family and that's what you do – you help your family."

Washington. In Port Townsend, Marvin G. Shields Post 26 hosted a meal for the crew of the U.S. Coast Guard cutter Osprey, which is based at Port Townsend’s Boat Haven. And they have collected more than $2,000 to support the Coast Guard.