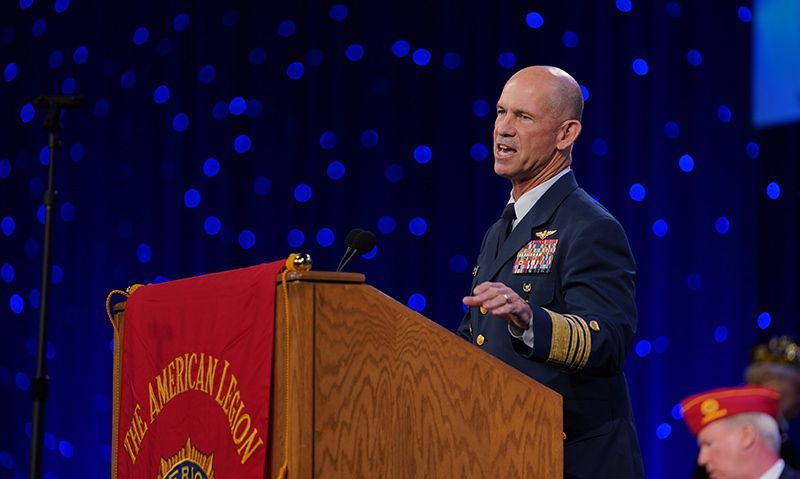 When the federal government shut down last winter, servicemembers in the U.S. Army, Navy, Air Force and Marines continued to receive their paychecks. But on Jan. 15, members of the U.S. Coast Guard – which falls under the Department of Homeland Security – did not get paid.

That’s when The American Legion stepped in, delivering $1,000,500 in Temporary Financial Assistance grants, assisting 3,120 children of 1,173 active-duty Coast Guardsmen servicemembers who were financially affected by the shutdown. That total comprised most of what was a record amount for single-month record TFA grant distribution.

On Aug. 27 during The American Legion’s 101st National Convention in Indianapolis, Coast Guard Vice Commandant Adm. Charlie Ray spent much of his time on stage thanking the Legion for their assistance during the shutdown.

“I am here to thank The American Legion specifically on behalf of the 42,000 active-duty women and men in the United States Coast Guard for what you did for us personally in the last year,” Ray said. “You made a difference in the lives of over 3,100 Coast Guard families. We have that government shutdown – the first time in the history of our nation that an armed service had not been paid for being on duty. That’s a tough time.

“Our folks continued to stay on watch. They served around the planet, going in harm’s way … they could not have been better served than they were by The American Legion.”

Ray said he was impressed by how quickly The American Legion reacted to the shutdown and its impact on the Coast Guard. “I’m talking about quick action,” he said. “This was not ‘we’ll debate this for weeks.’ This was … our people weren’t getting paid, and The American Legion were the first ones to step up. I can’t thank you enough.

But it wasn’t just the grant support that made a difference to the Coast Guardsmen. “At the post level The American Legion distinguished themselves,” Ray said. “In Vallejo, Calif., American Legion Post 550 presented $2,000 in gift cards to a small station we’ve got in Vallejo. Post 184 in Savannah, Ga., collected food and funds and diapers and everything to support their Coasties. At a breakfast fundraiser, Post 36 in Maine … raised $2,000. In Wyandotte, Mich., (Post 217) gave $100 Visa cards. And in Tannersville, Pa., they gave nearly $1,000 in toiletries and baby diapers.

“These are the things that make these young people … you kept them with the knowledge that their nation stood behind even when we had these challenges. It made a difference moving forward.”

Ray also thanked The American Legion for its support of the nation’s youth and for honoring members of the armed forces for its annual Spirit of Service Awards presented during the national convention.

“Because of this convention and because of the award ceremonies we have, where we identify them, shine a light on them and tell them how important their service is, these are the ties that bind the citizens of our nation to the people that serve today,” Ray said. “I can’t think of anyone that does that better than The American Legion.

Ray announced that Master Chief Petty Officer of the Coast Guard Jason M. Vanderhaden was so impressed with the Legion efforts that they will be forming a Coast Guard American Legion post in Virginia. Ray brought the draft charter with him to Indianapolis.