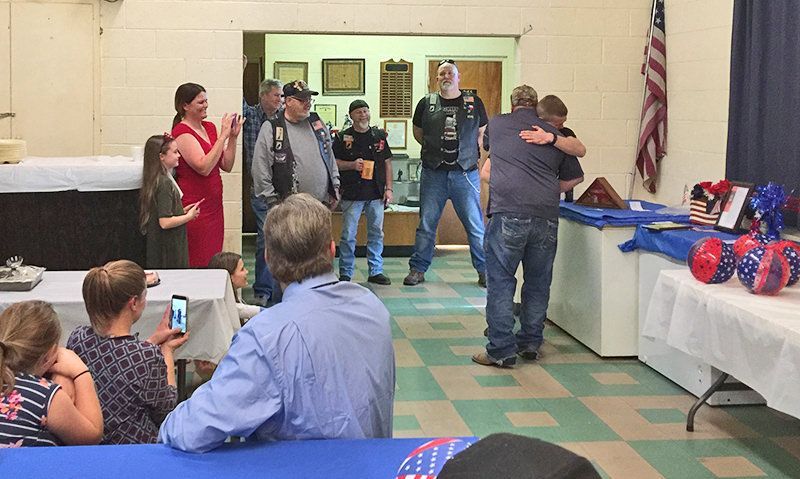 Mark Haines Jr. served in the U.S. Air Force from 1995 to 2016, deploying to Iraq and Afghanistan a total of 15 times during that span. The 42-year-old commander of Smiley-Summers American Legion Post 267 in Marshall, Texas, understands the difficulty of transitioning out of the military – and the sometimes tragic ending for those veterans who struggle.

Haines and Post 267 are attempting to stem the tide of veteran suicides at the local level, recently kicking off what the hope is to be at least a monthly attempt to show active-duty military and transitioning veterans that they are not forgotten by either The American Legion or their community. February 2 was the post’s inaugural “Welcome Home” initiative, which brought together the post’s American Legion Family and local community members to honor U.S. Marine Corps Private Christian Fincannon, who recently finished boot camp.

“I’ve lost a lot of buddies to suicide,” Haines said. “They’ve gotten back from deployments in different places. My thought process with (the Welcome Home program) was to help combat that. Our suicide rate’s outrageous right now. Anything we can do to show ‘hey, we’re here. We’re open. Come in and hang out. Come in and talk. You can call. We can do whatever we can to help you.' Just so they know they have a spot.”

Haines said the original idea came from his wife Donna, a member of Auxiliary Unit 267; Donna and three of the Haines’ children – all members of the American Legion Family – also helped out with the event.

When Haines took the idea to the post, “everybody was excited,” he said. “Everybody’s been waiting for a change at our post. Our post was … not doing a whole lot of anything. Everybody’s been so supportive. Our Auxiliary has worked crazy amounts. My Legionnaires have worked crazy amounts. My Sons (of The American Legion) have worked with me. Everybody seems to be on board with the new changes.”

The event at Post 267 included a meal and a ceremony honoring Fincannon. Members of the community attended, as did American Legion Riders and another veterans motorcycle group from Shreveport, La. Fincannon was presented with a Post 267 membership, a military coin, a plaque and a Marine Corps flag folded into a shadow box. Fincannon “was shocked,” Haines said. “He didn’t know what to say.”

Haines said the post will plan frequent welcome-home events around servicemembers coming home right after completing boot camps, those coming off deployments and those who’ve just left the military. The effort, Haines said, is critical in rural areas such as Marshall.

“They’re hundreds of miles away from (Department of Veterans Affairs) centers. I believe our closest one is an hour away,” Haines said. “The small towns, if they can pitch together and make something like this happen, it lets you know you’re welcome there. Let’s welcome these guys home and let them know ‘hey, we’re here.’”