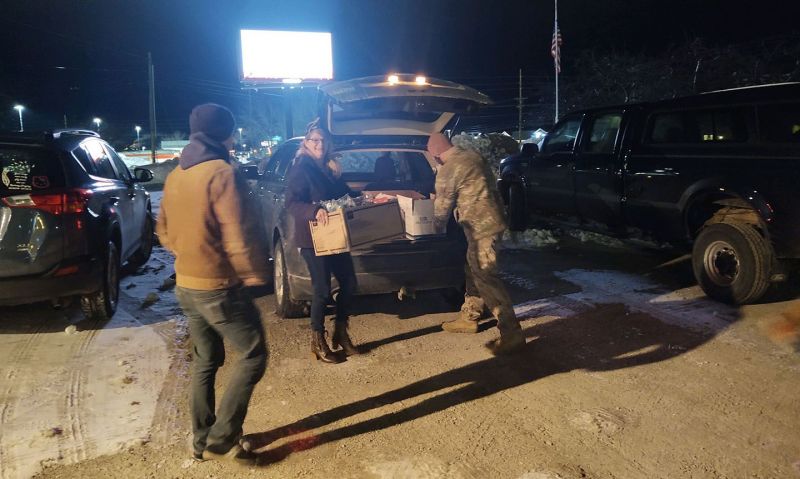 In mid-December, a group of Air Force Reservists arrived at Alpena Combat Readiness Training Center (Alpena CRTC) in Northern Michigan as part of the facility’s support for the Headquarters Air Force-led “Restriction of Movement” (ROM) mission. Alpena CRTC was chosen in 2020 to provide a location for airmen to spend two weeks in a closely controlled environment as a precaution to ensure they do not have COVID-19 before traveling to their overseas assignment.

For that first group, it meant isolating over the holidays – alone and away from their families. But thanks to the efforts of four Michigan American Legion posts and a Blue Star Mothers chapter, those servicemembers at least had something to help the 14-day isolation pass a little quicker.

Cereal City Blue Star MOMMAS Chapter 195 collected items to help the 200 airmen pass the time, and American Legion Posts 257, 443, 106 and 65 teamed up to deliver the items to Alpena CRTC, helping deliver some holiday spirit during a difficult time for the servicemembers.

The effort started when Chapter 195 was contacted by Jean Wixson from the 110th Wing’s Airman & Family Readiness Program about providing some items for the airmen. Chapter 195 President Penny Wright then reached out to SSG Michael A. Dickinson, II Post 257 in Battle Creek for help delivering the items.

Post 257 Commander Brian A. Mohlman was initially going to make the five-hour drive from Battle Creek to Alpena CRTC to deliver the items himself, but then reconsidered. “I said, ‘Let’s get some other posts involved.'"

Mohlman, who also serves as Michigan’s membership chairman, reached out to Thomas-Daniels-Hand Post 443 in Sanford, Post 106 in Grayling and William F. Weine Post 65 in Alpena. “We actually did a relay and relayed the stuff up there,” Mohlman said. “We had all these posts involved, and these guys were just ecstatic about doing this.”

Rendezvous locations and times for each stop were determined, and letters with instructions were prepared for each participating post, and then placed in sealed and numbered envelopes. Each participant was instructed to open only their envelope, read the delivery instructions, and then pass the remaining envelopes on to the next post.

On Dec. 15 at noon, Mohlman and Post 257 Second Vice Commander Samuel Gray departed Battle Creek and traveled to a rest stop near Clare, Mich. Awaiting them was Sanford Post 443 Legionnaire Mark Kloha, who then took possession of the cargo and the delivery instructions. Kloha continued the journey north to Grayling, where he was met by Post 106 Adjutant Brenda Bess and her husband. The pair took the cargo and delivery instructions and delivered the cargo to Alpena Post 65 and its adjutant, Ryan Wright, who in turn reached out to Alpena CRTC to arrange for final pick-up at the post.

Mohlman said the entire operation took just over six hours and provided items such as crossword puzzle books, videos and things “to keep them from going stir crazy,” Mohlman said. “These troops are held in quarantine for two weeks … and isolated by themselves, one person in a room,” Mohlman said. “That’s how crazy it is. So they were like, ‘Wow, (the donated items) are great.’”

Mohlman said The American Legion’s support efforts for the airmen isolating at Alpena CRTC will continue. “In the long term, this is going to happen until about April. There’s going to be a number of troops rotating through on deployments,” he said. “And the comments I got from the folks involved (this time) is they really want to be involved next time, too. With roughly 200 soldiers and airmen served with each trip, the Michigan Legion is actively reaching out to our younger veterans, providing them with items that will make the deployment process a bit less stressful.”

Mohlman said the conversations he had with other Legionnaires involved in the effort hit on how good it felt to assist others again, especially with the limitations imposed during the course of the pandemic.

“Throughout all of this, creativity is the key to success during this pandemic,” he said. “The more we’re willing to think outside the box, the greater the likelihood of success in our support and events.

“These guys were in quarantine over the holidays. That sucks. It was nice to be able to help them out.”