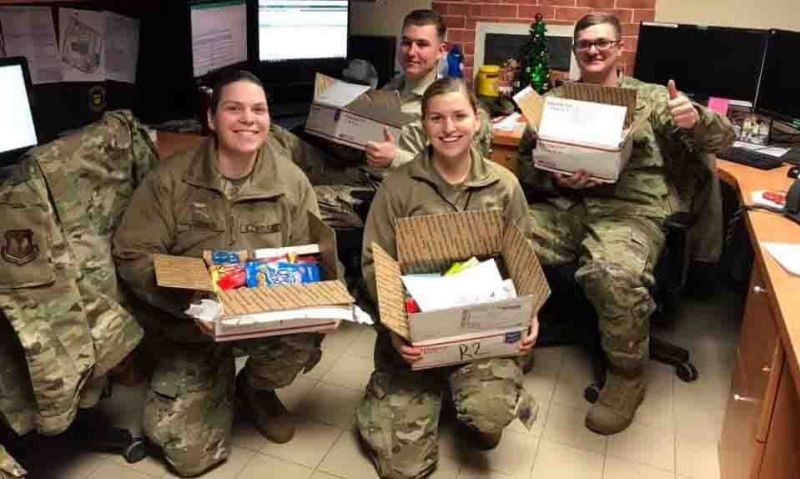 The effort includes inviting the public into the post to help pack the boxes before the post handles shipping them out. But COVID-19 restrictions meant no gatherings at Post 142 – and possibly meant no collection effort this year.

“We were trying to figure out was this going to get lifted … this people getting together ban,” Post 142 Commander Chad Sheridan said. “Every year that we’ve done this, we always have people donate everything that goes into the box. They keep dropping it off and dropping it off.

“And then one day, everybody gets together in the (post) basement and we have a big packing party. We put everything on tables, and people come in – the public loves it. It’s hands-on. We have (free) food. It’s a great deal. The community shows up in droves.”

Sheridan said that event is “the big part of it: getting together. So we were moments away from cancelling it, until somebody mentioned ‘well, why don’t they just come and get their boxes from us.' We all looked at each other and said … ‘that’s a great idea.’”

Members of Post 142 started working through the logistics of the box distribution and decided to open the post every Saturday and Sunday for two hours, as well as one night a week, through January for members of the community to pick up empty boxes and then drop off filled ones.

“Some people even packed them in the parking lot,” Sheridan said. “They brought the stuff and just sat in their trunk and packed it up and returned it the same day.”

Extending the gift box effort this year to include servicemembers stationed stateside who were unable to leave their base because of the pandemic, the post had set a lofty goal of 600 boxes – 350 more than were sent out in 2020 – and beat that mark by nine boxes. “It was unbelievable how many people started showing up and picking up boxes,” Sheridan said. “It was a great idea, but was it going to work? We just kind of winged it, and it turned out it was a home run."

Sheridan said area residents provide names and addresses of those to whom they wish to have a box delivered; other names came from Sheridan’s brother who recently retired from the Air Force. And each box this year included a handwritten note from Sheridan and from area children.

The 48-year-old Sheridan, who had U.S. Army deployments to both Iraq and Afghanistan, said receiving a package from home while stationed overseas always brought a smile to him. “But what I noticed was some people didn’t get any packages,” he said. “My folks, my brothers and sisters, were a military family. They were constantly sending me stuff, which of course I shared. But there were some guys, they didn’t get mail, let alone packages.

“So whether or not you’re deployed overseas in a combat zone, or if you’re in Africa building a base, or wherever – even in the United States – it means the world. It’s a huge morale booster. A pick-me-up. We love it.”

As we continue through 2021, we will continue to share the stories of American Legion Family members rising up during COVID-19. The following are a few of those examples.

Members of American Legion Post 295 in Cypress spent part of Feb. 6 at the OC Food Bank, where they formed a masked, socially distanced assembly line to pack food into boxes. In two hours, the group of American Legion Family members loaded up 530 boxes onto 13.25 pallets.

Post 295 Legionnaire Michael Gorsuch shared the effort with The American Legion National Headquarters Facebook page and said the recent effort at the food bank was “a desire to continue to be part of something bigger than oneself. We see hungry Americans and we come together as veterans to do what we vowed to do, and that’s to continue to serve America.”

Being out in the community can prove inspirational to others, Gorsuch said. “What we have found is that we can take care of what we can in our community: Being the light and giving hope is what our veterans can do,” he said. “This shows the importance of not only an active leadership, but membership that’s willing to take on a challenge.”

In Grove City, Paschall Post 164 teamed up with M.A.S.H. Pantry and Bob Evans to distribute around 3,700 cases of prepacked macaroni and cheese meals for area veterans in need.

Post 164 Commander Jeff Shipley, who organized the effort, told NBC4 that despite very cold weather, the distribution effort needed to happen. “We know there’s a lot of people in the community that are hard up right now and need some assistance,” Shipley said.

Post 164 will continue to distribute meals during the upcoming weeks.

In Emporia, American Legion Post 151 won’t let the pandemic get in the way of its annual Valentine’s Day tradition of remembering local veterans in assisted-living facilities.

Post 151 members normally visit the veterans at Accordius Health, Greensville Health & Rehabilitation Center and Bloom Retirement Center, and bring with them Valentine gift bags and flowers for veterans and staff.

But because of COVID-19 restrictions, this year members of Post 151 will instead deliver 28 Valentine gift bags to be distributed among the three facilities’ veteran residents.