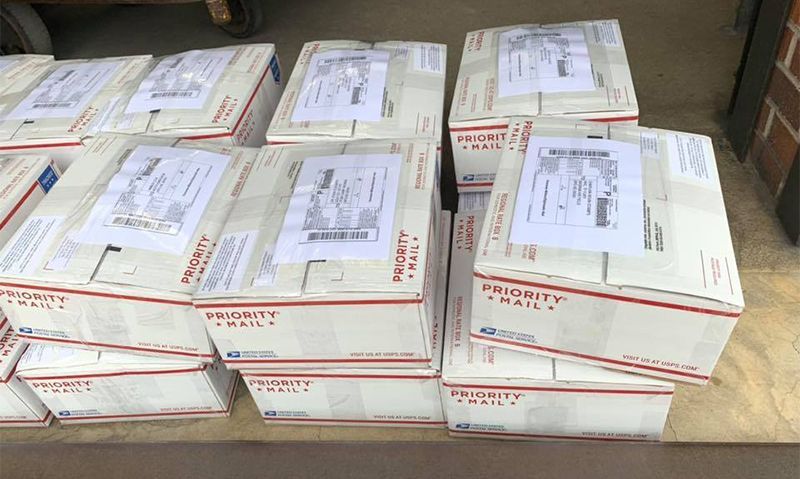 In 2005, U.S. Air Force veteran Charly Mathews was dealing with a severe injury while her husband was stationed in United Arab Emirates. In need of “something to do,” she started making greeting cards while she was recuperating.

She sent the cards, along with care packages, to her husband and others he was serving alongside. And “it kind of snowballed from there,” she said.

Sixteen years later, Mathews is still making greeting cards and sending them to U.S. troops. But along the way she’s created a network of people throughout the nation who also are making cards, making up her Cards for Soldiers program that this year is sending out more than 100,000 greeting cards to U.S. servicemembers stationed overseas. Boxes of cards also were provided to Department of Veterans Affairs patients at seven facilities in Michigan this year.

“I have over 8,000 card makers throughout the U.S., and I have some out of Guam, Australia, England, Germany, Panama and other areas,” said Mathews, currently a member of American Legion Post and Auxiliary Unit 106 in Grayling, Mich. “(To locate servicemembers) we utilize the USO, the American Red Cross, Chaplain Services, any individual that wants to help. We’re literally in every country where there’s a USO, Red Cross or Chaplain Services.”

The cards are handmade; some are left blank so the servicemember can sign them and send them back home to family, friends and loved ones, while others are signed thank you, Christmas and encouragement cards.

“(Deployed servicemembers) really don’t have a way to get ahold of greeting cards to send messages back to their families,” Mathews said. “A lot of the cards are kid-related, since a lot of kids are left behind. They really enjoy the kid cards: birthday, missing you, hello – anything that has to do with a child. Those seem to be the most popular.”

Mathews has been a member of several different American Legion posts that she says has helped the program along the way, including Post 351 in Utica, Mich., and Post 109 in Romeo, Mich., where she was a past commander.

She said since she’s moved to Grayling, the amount of cards sent out have “doubled and tripled every single year.” She said having the support of Post 107 is “a blessing, because we solely operate on donations for postage alone. We have (Post 107) involved, as well as other posts in the area involved.”

Mathews also has developed relationships with non-profits Desert Angels Inc. in Michigan and Operation Troop Support in Massachusetts to coordinate the sending of care packages to servicemembers. Through contacts Mathews has developed, the program even is able to send cards and packages via the Red Cross and USO to servicemembers stationed at forward operating bases.

Mathews said the recipients of the cards show their gratitude. “We’ve gotten all kind of gifts back from them,” she said. “Flags that have been flown over (their bases). Little trinkets of things from Iraq. Magnets for the refrigerator. Key chains. Coins. Foreign money – just so we can see that they appreciative. We’ve gotten all kind of certificates from commands. We get emails and texts.

“I have a service dog, and she (monitors) my sleep apnea and diabetes. When we first started (at Post 106) in 2017, I had to train the dog to not pay attention to the phone, because my phone was literally clicking from a text almost every few minutes. I was getting all these texts and messages on my phone throughout the night.”

Mathews said she’ll continue Cards for Soldiers “as long as I can physically be able to do it.” But she insists it is not a one-person effort.  Every card member is recognized on the program’s Facebook page for their efforts.

“I make a lot of the cards myself. It’s rewarding,” she said. “But a lot of people are a part of this program, from making the cards to packaging them up. It’s all of us.”