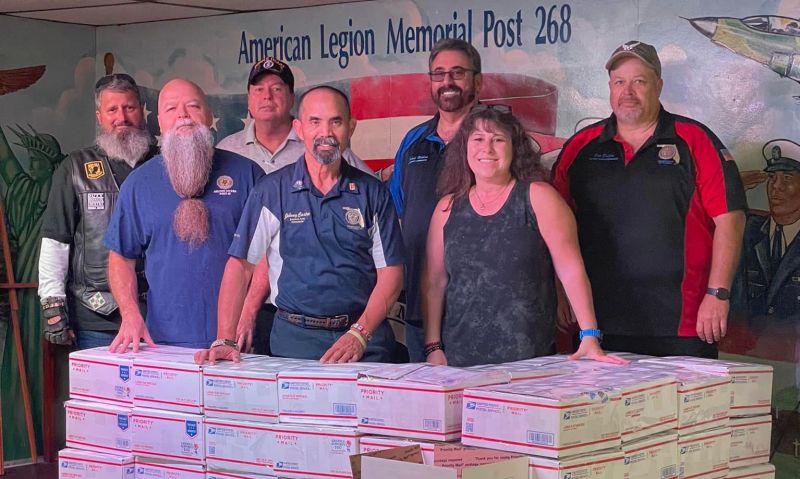 When the American Legion Family is called into action, they respond. This response was visible in the American Legion Department of Florida when members from three districts sent care packages to U.S. servicemembers serving in Ukraine to bring them the comfort of home.

“My heart is really into this because I was deployed multiple times, so I understand what it means to be connected back home. One of the great ways is to receive a package from folks back home,” said Johnny Castro, Florida’s southern area district commander, who retired from the U.S. Army in 2016 with deployments to Iraq, Qatar and Kuwait, and lead the care package project.

Castro was recently contacted by the commander of a Florida National Guard unit that is serving in Ukraine to see if The American Legion could support his unit of 165 servicemembers. Castro responded, “Absolutely.”

Castro reached out to the three district commanders (Districts 9, 11 and 14) in his area about collecting supplies for the care packages. He had everyone send out messages to the posts within their districts about the request for donations. “When we get the call to help out, we step up and do it,” he said. “The servicemembers don’t have a whole lot of provisions that makes their day-to-day living a little more bearable.”

Donations were brought to District 11’s meeting at Post 268 in Riviera Beach on Jan. 22, where they were packaged by members of the Legion, Sons of The American Legion, Auxiliary and Riders. Enough donations were collected to package 65 care boxes. “It was incredible. Really impactful,” Castro said. “One of the reasons why I joined The American Legion was because it’s a great organization that creates more impact than the other organizations that I also belong to. It’s the different programs in The American Legion and the way that it creates outreach within the community to support not only our veterans and their families, but also the active-duty component.”

The National Guard unit commander said he was going to separate the items in the packages when they arrived. So instead of addressing care packages to individual servicemembers, items were packaged separately to allow servicemembers to take what they needed. In each care package, Castro left his business card and a copy of The American Legion Magazine. He also wrote a letter on behalf of the American Legion Department of Florida that included the website address of the department and national.

The care packages were shipped at no cost by Project Holiday of Delray Beach, Fla., which ships care packages to deployed servicemembers. Even though they normally ship over the holidays, Castro said, “They thought this was another opportunity to help out our deployed personnel. So they are funding the cost of shipping.”

Castro is a recipient of a care package from Project Holiday. While deployed, they shipped 250 care packages to his until of about 195. “It really didn’t matter what was in the box,” he said. “All that mattered was that we knew it was coming from home. And that’s all we needed.”