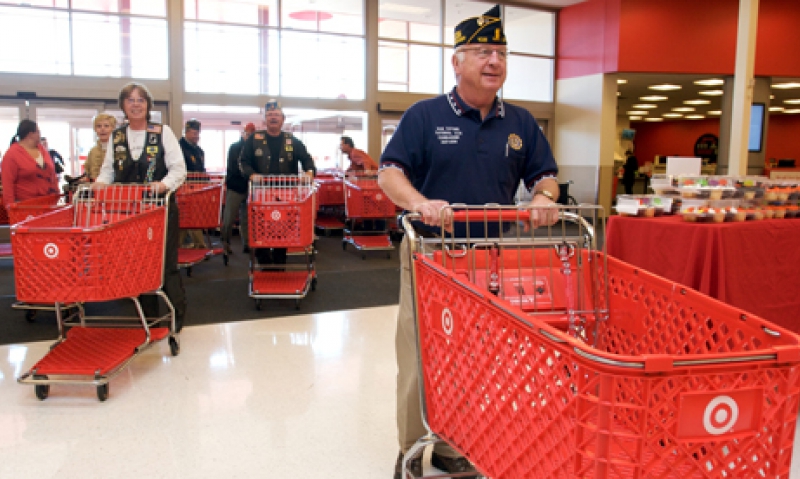 Members of the American Legion enter a Super Target in Edina, Minn. Photo by Thomas Whisenand

Soldiers attacked by enemy forces at Command Outpost Keating in Afghanistan are reaping the benefits of an American Legion-inspired fundraising campaign that brought in more than $100,000 in donations.

The money has been used to buy comfort items for the soldiers, who survived an onslaught from about 300 enemy insurgents. When COP Keating came under attack Oct. 3, members of Bravo Troop 3-61 Cavalry from Fort Carson, Colo., had to call in an air strike on their own position that destroyed their personal possessions.

Most of the 56 survivors left the region with nothing more than the clothes on their backs and their weapons. Lost were all their personal items, including computers, cameras, books, video games and other comfort items that brought some respite from the war.

Soon after the attack, one of the soldiers e-mailed The American Legion and expressed concern that no one at home knew what they were doing in Afghanistan, and that no one really cared. The soldier’s words were posted on The Burn Pit (www.burnpit.legion.org), and the Legion’s COP Keating Relief Fund was born. In less than a week, more than $50,000 poured in. Computer Science Corp. offered laptop computers, Target matched the $50,000 with gift cards and merchandise, and Legionnaires in three cities rallied to the cause.

The Legion also worked with Veterans of Valor, a nonprofit organization founded by a combat-wounded Operation Iraqi Freedom veteran, to purchase iPods for the troops.

Legionnaires in Colorado Springs (near Fort Carson) and Minneapolis (near Target corporate headquarters) drew major regional media coverage when they appeared at Target stores, escorted by Legion Riders, to buy merchandise for the troops. Then, on Oct. 29 in northern Virginia, representatives of The American Legion, Target Corp., and Computer Science Corp. met in the final U.S. leg of the nationwide drive to deliver comfort items to the 56 soldiers forced to destroy all their possessions.

“This is extraordinary,” said Assistant Deputy Secretary of Defense Gary J. Mostek, as DVDs, video games, laptop computers, cameras, memory cards, books, magazines and other items were sorted at American Legion Post 28 in Triangle, Va. “Coming so close to Veterans Day, it really shows the strength of the bond among comrades in arms. There are no politics here.”

No additional contributions are needed for the COP Keating Relief Fund. Those who wish to donate to soldiers in need are urged to instead give to The American Legion’s Operation Comfort Warriors , which purchases comfort items for U.S. soldiers recovering from wounds and illnesses at military hospitals around the world.