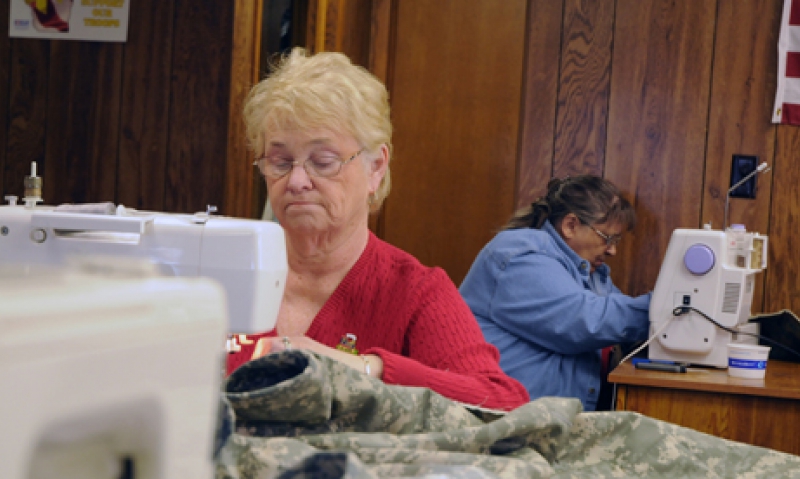 Linda Wieck's Camo Quilt Project started in April 2006 when her son-in-law, Todd, asked her to sew him a quilt that he could take to Iraq. His request was simple: just a blanket that was small, camouflage, made with cotton batting and ideal for a first deployment.

That summer, when Todd was training in Camp Shelby, Miss., the 48 soldiers in his unit noticed the quilt and expressed interest in having one. Wieck promptly made a quilt for all of them and shipped them to Camp Shelby before they deployed in July 2006. It was a modest beginning for the Camo Quilt Project, which started as a small volunteer effort in Plymouth, Wisc., but ballooned into something much greater as media of all sizes began reporting on it. Three and a half years later, Wieck and hundreds of volunteers have sent out an estimated 2,175 quilts to servicemembers from as far away as Germany. They've received financial backing and donations from all over, and a local company - Glacier Transit & Storage - gave office space to her and her volunteers to use.

"I really enjoy doing this," Wieck said. "I love to sew. When my son-in-law asked for one and I found there was a demand for them, I decided this is what I'm going to do."

Servicemembers from all branches can request a quilt. They're told how much it costs to produce and can choose to donate whatever amount they want. Costs are kept low because of donations and because Wieck buys fabrics from a thrift supplier on the east coast.

"Some (servicemembers) give a little bit because that's all they have. Some give hundreds of dollars," Wieck said.

Donations for quilts are sent to Franklin Post 387 in Plymouth. The American Legion facilitates the funds to Wieck and her volunteers, and the quilts are produced and shipped out. Many of the project's volunteers are from the Legion family.

Last week, it was discovered that a soldier killed in the Fort Hood shooting tragedy received a camo quilt in September. Sgt. Amy Krueger, who was from the nearby town of Kiel, Wis., had sent in a request for quilts for the other 45 soldiers in her unit shortly after she received hers.

When Wieck and her volunteers realized Krueger was one of the 13 servicemembers slain in the tragedy, they set out to fulfill her request. On Saturday, the Camo Quilt Project will ship out 45 specially-tailored quilts to Krueger's comrades. The blankets will have ribbon and card sewn into them, recognizing that they were produced in Krueger's honor.

To donate or learn more about the Camo Quilt Project, visit http://camoquiltproject.blogspot.com.