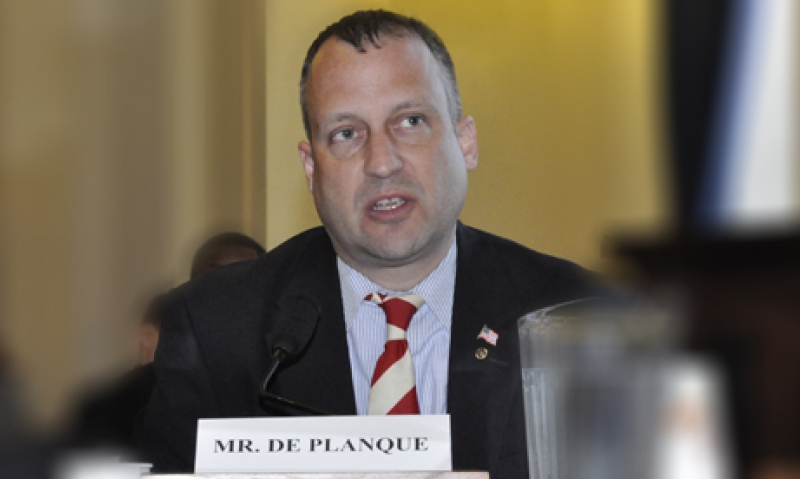 Beginning his testimony before Congress today, American Legion staffer Ian de Planque quoted Department of Veterans Affairs official Michael Wolcoff from a Jan. 3 interview on CBS's "60 Minutes": "We stress over and over again to our employees that quality is our No. 1 indicator ... a requirement for successful performance."

Then de Planque said that "even cursory examination of actual operations shows that a far greater emphasis falls on the quantity of claims processed than the accuracy with which those claims are processed."

Appearing before the House Veterans' Affairs Subcommittee on Disability Assistance and Memorial Affairs, de Planque drove home a key theme of his testimony: VA contributes to its own claims backlog by initially failing -- far too often - to make an accurate decision on a veteran's disability claim. De Planque is deputy director of The American Legion's Veterans Affairs and Rehabilitation Division.

Recently, VA Secretary Eric Shinseki announced his goal of increasing the accuracy rate in properly determining veterans' disability claims to 98 percent, while cutting the processing time to 125 days or less for each claim.

"VA means to eliminate the backlog while eliminating error," de Planque told the subcommittee, chaired by Rep. John Hall, D-N.Y. "However, if such a plan has any chance of being effective, it must start with the quality component. Otherwise, there is little hope of providing real benefits to veterans."

According to VA, it is on track to process more than 1 million claims this year. So an error rate of just one percent means that 10,000 claims will be processed incorrectly. Yet VA's accuracy projection is only 87 percent - a figure challenged by its own Office of the Inspector General as being too optimistic.

VA expects about 200,000 veterans with ischemic heart disease to file new disability claims under new regulations affecting those who were exposed to the Agent Orange herbicide. "Going by the optimistic error rate of 13 percent, this still means 26,000 of those veterans will have their claims improperly processed," de Planque said. "An error that denies service-connection for that disability can be the difference between getting by and becoming one of over 100,000 homeless veterans in America today. Errors affect live. It is essential that the removal of errors from the system be the highest priority of reform."

DePlanque described an environment at VA regional offices in which workers are pressured to "make the numbers for the week" - a minimum of 3.5 claims per day. He recounted the comment of one VA employee during an American Legion Quality Review. Gesturing toward an especially thick claims file, the worker said, "That's one of my fellow veterans there. I have less than two hours to go through that claim. How am I giving that guy justice?"

Employees at VA want to get the job done right, to take pride in their work and be accurate, de Planque said. "However, the pressures brought about by volume are making it increasingly difficult for those employees to do so."Across the country, VA is testing several pilot programs in an effort to make the claims process more efficient. But de Planque said all of these efforts still have increased processing speed as their "prime directive."

"Clearly, VA is interested in transforming the office environment, and there is no better time to ensure that this transformation is built upon a solid foundation - accuracy," de Planque said. "Unless the transformation of the operating environment is fundamentally changed to an environment based on quality, VA will only be processing mistake-ridden claims - faster."

Because VA has recently hired a large number of workers to help tackle the claims backlog, it is in an excellent position to change the mindset of its employees and management system, according to de Planque.

"Most veterans could agree that a little longer time for a claim, if it is done properly, is a small sacrifice to pay for a system that will be better and better for many years to come. If your choices are swift but shoddy work, versus deliberate but accurate work, many would vote for accuracy every time," de Planque said. "Errors take years, not hours, to correct."

The American Legion has long advocated a change in the VA work-credit system that emphasizes the quality of claims adjudication, not the number of claims being processed.

De Planque told the subcommitee that the Legion's position is based on the belief that "the current emphasis on numbers creates an atmosphere of substandard quality and cutting corners, and that - as much as any other factor - contributes to claims remaining in the system for long periods of time."

VA's current work-credit system clearly favors volume over accuracy, according to de Planque. "Whether management receives bonuses is based on the volume of claims moved through the office. As long as this state of affairs persists, then quantity is what will be produced - often at the expense of quality.

"If you improve the quality of decision-making in VA, the backlog will diminish. By minimizing or, better yet, eliminating errors at the regional office level, the number of appeals and, thus, the number of claims destined to languish many years in the system will be massively diminished. This is the goal VA must strive for."

Through its annual "System Worth Saving" reports, The American Legion monitors the state of VA's health-care system and evaluates its effectiveness. Recent reports show that patient satisfaction is among the best in the entire health-care industry. De Planque suggested that this level of success should be replicated by the Veterans Business Administration in dealing with veterans' disability claims.

"VA has recently announced changes to their internal work-credit system," de Planque noted. While information on the changes is currently vague, specific details will "hopefully be revealed in the near future. Whether these changes will be real changes with a chance to positively support an emphasis on quality, or simply window-dressing covering a continued emphasis on pure volume, remains to be seen."