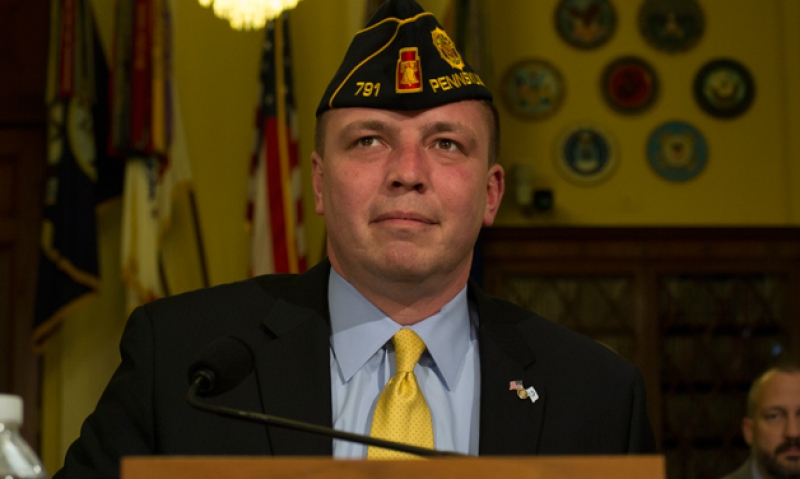 Zachary Hearn, deputy director of benefits for the Legion, appeared before the House Veterans’ Affairs subcommittee on disability and memorial affairs on Dec. 4.

Zachary Hearn, deputy director of benefits for the Legion, appeared before the House Veterans’ Affairs subcommittee on disability and memorial affairs; he also submitted written testimony for the record.

The American Legion challenged the accuracy of online statistics from VA’s Monday Morning reports, claiming they were not consistent with the Legion’s review of recently adjudicated claims; of 260 claims examined, 55 percent contained errors. “This statistic is in stark contrast to the approximate 90 percent accuracy rating in claims adjudication indicated by (VA),” the Legion stated.

According to VA data, Hearn noted, the Nashville VARO had a 95.1 percent accuracy rating for the previous three months. Yet when American Legion experts reviewed 22 of the claims, they found seven with errors. “Our review paints a far dimmer picture of Nashville’s accuracy than indicated in the Monday Morning Workload Report,” Hearn said.

Lauren Price, a retired Navy petty officer and representative of Veteran Warriors, told the subcommittee that the Department of Veterans Affairs “is not doing business properly. I could sit here for hours and give you statement(s) of egregious behavior, wrongful denials - in some cases, deliberate malfeasance.” She asked Congress to press forward in its VA oversight and support her organization’s mission, “which is to have a full overhaul of the (VA), completely reorganizing the way they’re doing business, and demanding full and 100 percent accountability and repercussions for their actions.”

Another witness, Bettye McNutt, described how she submitted a benefits claim 23 years ago that VA continues to deny, despite expert medical opinions that her late husband, a Vietnam War veteran, died of cancer “that was, as likely as not” linked to Agent Orange exposure.

Price, when asked to identify the most frequent errors in the VA claims process, said, “Failure to apply the law correctly, complete disregard of medical evidence provided - most specifically, from civilian providers, and ... the almost complete and utter disregard for anything that is considered a policy, rule, regulation or law.”

Price noted an April 26, 2010 VA policy change on disability claims related to burn-pit exposure (as in her own case). The application of that policy change by VA regional offices (VAROs), she said, “has, to the best of my knowledge, not been addressed once in the almost 5,000 victims I know personally.”

Ronald Abrams, joint executive director for the National Veterans Legal Services Program, told the subcommittee that VA’s error rate for complex disability claims has increased. “You just simply can’t go too fast when you have complicated claims - special monthly compensation, traumatic brain injury. In fact, the regulation dealing with TBI is so complicated that some people call it the ‘Da Vinci Code.’”

Sometimes, Hearn said, VA doesn’t seem to know when to stop, “and over-complicates a claim.” He referred to a case from the VARO in Reno, Nev., which required two medical examinations to establish service connection to a veteran’s PTSD “when only one was necessary, and it took over two years from the date of the first examination to adjudicate the claim, and then another four months to notify the veteran.”

When complex benefits claims are made even more difficult by VA errors, Abrams said, “The veterans face a nightmare. Not only do they have to get the right evidence before the VA, they have to overcome the unfair denial, which is an obstacle that stands in their path.”

Abrams said the worst type of VA errors are the result of adjudications made too quickly. “Some VAROs incorrectly adjudicate and prematurely deny claims based on inadequate evidence - especially inadequate VA exams. These errors reveal for many veterans that the claims process can be adversarial.”

Abrams’ experience includes participation in more than 40 Regional Office Action Reviews conducted by The American Legion, “who should be commended for doing that work.” Such reviews showed him that VA’s error rate “has been consistently at least 30 percent in the various (regional offices). Sometimes it’s higher. It’s unrealistic to assume that the VA will ever get its real (accuracy) rate to 98 percent.”

VA has a “gold mine” of data to help improve the accuracy of its workers, the Legion testified, in the Veterans Benefits Management System, decisions of the Court of Appeals for Veterans Claims, the Appeals Management Center and the Board of Veterans Appeals. Yet, “this gold mine remains untapped. The American Legion would like to see VA develop a system to analyze the vast trove of error information, track it, and use it to develop training to improve results.”

Putting the claims accuracy issue into proper perspective, Hearn told the subcommittee that the difference between VA’s stated goal of 98 percent accuracy “and even 97 percent is over 10,000 veterans who may not get the benefits they earned.... That is why The American Legion is constantly raising the importance of accuracy. Because for all those veterans who wind up on the wrong end of those errors - VA’s accuracy rate may as well be zero.”

Hearn said that VA needs to adopt strategies articulated by National Commander Daniel M. Dellinger during his Oct. 3 congressional testimony: fix a work-credit system “that currently places more emphasis on actions completed than actions done right,” and aggregate common errors “to develop a training plan - these are steps we want to see taken.”

According to a February 2013 Congressional Research Service (CRS) report, about 384,000 servicemembers have been diagnosed with TBI or PTSD from 2000 to 20012. The Associated Press reported last May that, in 2012, more than 85,000 veterans sought treatment for injuries or diseases caused by MST.