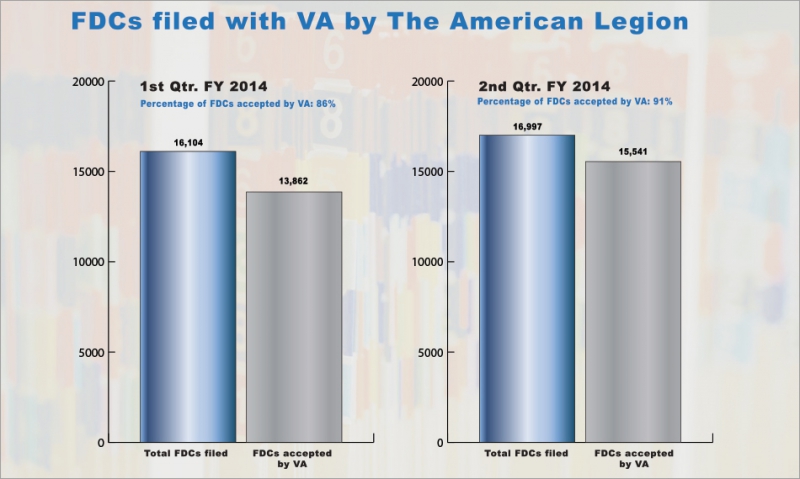 Figures released by the Department of Veterans Affairs (VA) for fiscal 2014's second quarter show an increase in the number and quality of fully developed claims (FDCs) being submitted nationwide by American Legion service officers and other accredited representatives.

Because they include more up-front documentation than traditional disability claims, FDCs move through the VA adjudication system much quicker. While traditional claims can take more than 300 days to be developed and decided, FDCs handled by the Legion currently take an average of 136 days. But Zachary Hearn, The American Legion’s deputy director of benefits, said that several VA regional offices (VAROs) were averaging less than 90 days.

Hearn noted that 40 percent of all disability claims filed in fiscal 2014’s second quarter by Legion service officers were FDCs; nine out of 10 were accepted by VA without reservation.“Not only does that show we are submitting more of these types of claims, it shows that our service officers are highly effective in doing this work," Hearn said. "It means they’re asking veterans and their spouses the most pertinent questions.”

Department service officer schools conducted twice a year by the Legion have recently focused their training on FDCs. Hearn said that he and other members of the Legion’s Regional Office Action Review teams have also met with Legion service officers at the VAROs to provide training.

The increasing trend in filing FDCs is good news for veterans. “For some of these VAROs that are performing poorly overall, there is still much room for improvement” Hearn said. “But because of the concerted effort by The American Legion and by our service officers – whom we can’t be more proud of – many veterans are receiving their benefits much faster today than they did a year or two ago.”

Best VAROs by average days to develop and decide FDCs: