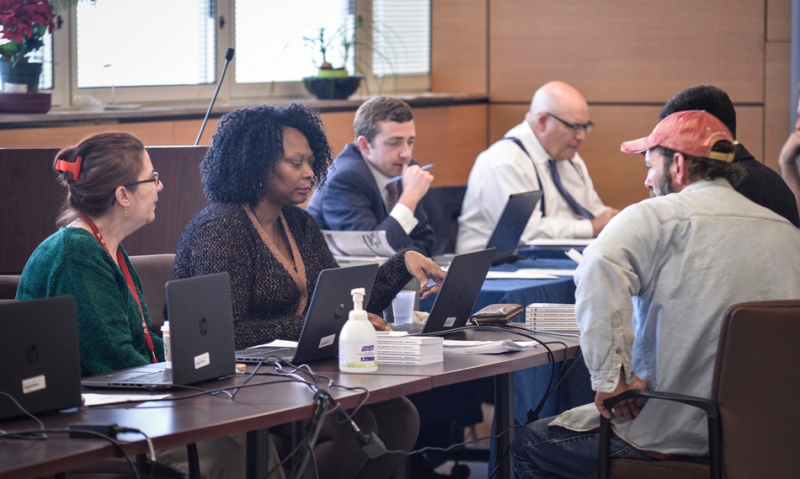 Nearly 100 veterans participated the first two days of The American Legion’s Veterans Benefits Center (VBC) at the Philadelphia VA Medical Center March 17-18. For some, the experience was life-changing.

Al Vitiello, a 1970-1972 U.S. Marine Corps veteran who now is homeless, praised the service he received from American Legion accredited representative Michael Spinnicchia at the event. He said it made him want to be a part of an organization like the Legion. Vitiello also handed out VBC flyers to other veterans and said he was going to keep trying to get others to come to the center before it wraps up Thursday evening.

“Coming here was a godsend for me,” said Vitiello, who was trying to file for benefits after he was unsuccessful using another veterans service organization. “Using the Legion and applying for the benefits … I should have done this two years ago. (I made) tremendous progress today. Not just progress (but) extreme progress that I wouldn’t have been able to make on my own. If The American Legion wasn’t here today I still wouldn’t have it done.”

Sitting across from Spinnicchia made the difference to Vitiello. “For me, it was the only way to do it,” he said. “It was the only way I would have been able to do it. If I had to make calls and do it online … I’m not that patient to be on the phone for a long period of time. And I don’t have access to being online very much. This helped me connect the dots in ways I never knew I was able to do it.”

The VBC, the second in 2015 and the continuation of a series of American Legion veterans service events that began last June, allowed Philadelphia-area veterans to come to a centralized location to file for VA benefits claims, check on pending claims, enroll in VA health care, and check into other services, such as housing and education.

Legion representatives worked alongside VA staff from both the Veterans Benefits Administration (VBA) and Veterans Health Administration (VHA). In the first two days, more than a dozen veterans were enrolled in the VA health-care system.

Meanwhile, having VBA staff present was vital to veterans like Irving Joyner, who served in the Army from 1980-1992. Joyner said his claim was “pushed back twice” for lack of documentation that he has since provided, but he still hadn’t gotten any word on the progress of his claim.

At the center he met one-on-one with a VBA rep and got the answers he needed. “I think (my claim) is going to start moving now,” Joyner said. “Now I’m going to be set up for (Compensation & Pension exams), and (the VBA rep) said I should be getting a letter sometime this week.”

Being able to deal with a human being, rather than a phone system, put a smile on Joyner’s face. “It’s very valuable because you don’t have to go through somebody putting you on hold to go find somebody, and then that not being the person to help you,” he said. “Then you end up sitting on the phone for almost an hour and still aren’t helped. It’s very valuable coming here and going face to face with these guys.”