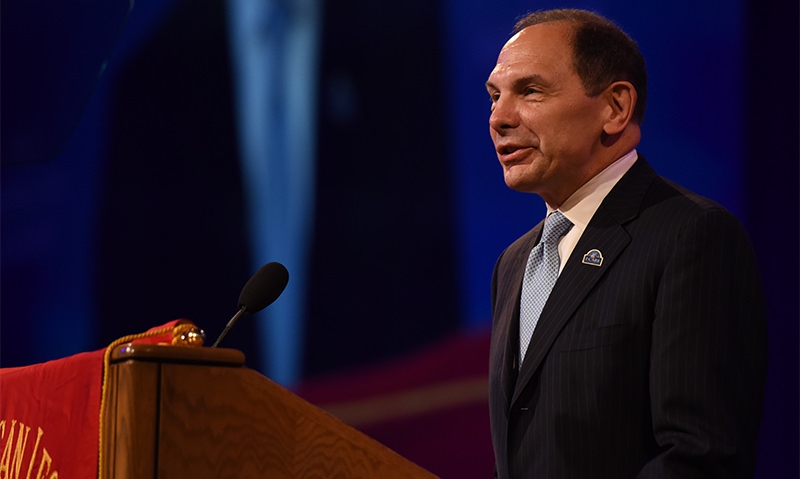 While some are calling for the privatization of health care for the nation’s veterans, the man leading the Department of Veterans Affairs says those calls are not motivated solely by concern for veterans.

“Some have argued VA can best serve veterans by shutting down VA health care altogether,” McDonald said. “I suspect that proposal serves some parties somewhere pretty well. But it’s not transformational. It’s more along the lines of dereliction of duty.

“It doesn’t serve veterans well, and it doesn’t sit well with me. So make sure there’s substance to those discussions, that they’re about veterans’ interests and not something else.”

During a 24-minute speech, McDonald admitted VA still has work in front of it but said the agency has the opportunity to make 2016 the year “it turns the corner.”

“You’ve heard many times that VA is broken,” he said. “I disagree. We have challenges, yes. But VA can be transformed. Transformation is well underway, and we’re already seeing results.”

McDonald pointed to changes in leadership, noting that 14 of the department’s top 17 executives are new since he was appointed in July 2014. “These are world-class, enthusiastic business leaders and health-care professionals,” he said. “Eight of them are veterans themselves.”

VA employees are “good people,” McDonald said. He admitted they’re not perfect but said, “It’s a gross misrepresentation to cherry-pick the worst and hold them up like they represent VA employees, just like it’s a gross misrepresentation to hold up a bad veteran to represent all of us. It’s a distortion that sells papers, but it’s a distortion that hurts veterans and the good people caring for them.”

McDonald said more than 3,775 VA employees have been terminated in the last two years. “Some people think everything will be fine if we fire more people, more quickly,” he said. “But that’s just not true. We can’t fire our way to excellence.

“Over my 33 years in the private sector, I’ve never encountered an organization where firing people was a measure of leadership. We won’t punish people based on opinions, recycled and embellished media accounts, or external pressure. It’s not in the best interest of the veterans we serve.”

The average wait time for primary care is five days, six days for specialty care and two days for mental health care. “And by December, you can expect same-day access in primary care and same day access in mental health care,” McDonald said. “Ninety percent of veterans we’ve surveyed are ‘satisfied or completely satisfied’ with the timeliness of their care. We won’t be satisfied until we hit 100 percent.”

Veterans' homelessness has been reduced by 47 percent since 2010, McDonald said, aided by partnerships with other government agencies, criminal justice and mental health professionals, nonprofits, local government officials, community providers, local VSOs and others.

McDonald said adding staff, adjusting policies and designing an automated claims-processing system has reduced the disability claims backlog by almost 90 percent and the average wait time for a claim by 65 percent.

But he cautioned that there were only so many improvements VA could make without the help of Congress. He said the Senate Appropriations Committee has approved a VA budget nearly equal to what President Obama proposed, but that the House has proposed a budget $1.5 billion less.

“That will hurt veterans and impede critical initiatives to transform VA into the high-performing organization you deserve,” McDonald said. “You should know there are more than 100 legislative proposals for veterans in the president’s 2017 budget – many vital to maintaining our ability to purchase non-VA care. Only Congress can modernize and clarify our purchased-care authorities to streamline access to Community Care programs in years ahead.

“We submitted our plan last October, but we need congressional action to execute it. Only Congress can enact legislation so we can better compete with the private sector (and) get the best medical professionals to choose to serve at VA. And perhaps most importantly, only Congress can modernize the archaic appeals process. Last year, the Board (of Veterans Appeals) was adjudicating an appeal that originated 25 years ago.”

McDonald said that if there are no significant changes in resources, the number of veterans waiting on an appeals decision will jump by 179 percent by 2027. He thanked American Legion National Commander Dale Barnett for urging the organization’s members last week to contact Congress and call for legislation to modernize the appeals process.

“In five years, we could have appeals resolved within one year of filing,” McDonald said. “The legislation costs nothing, and it will be more efficient and less costly over time. The alternative: more resources dedicated to a broken system. Veterans waiting 10 years for a final decision on your appeal.