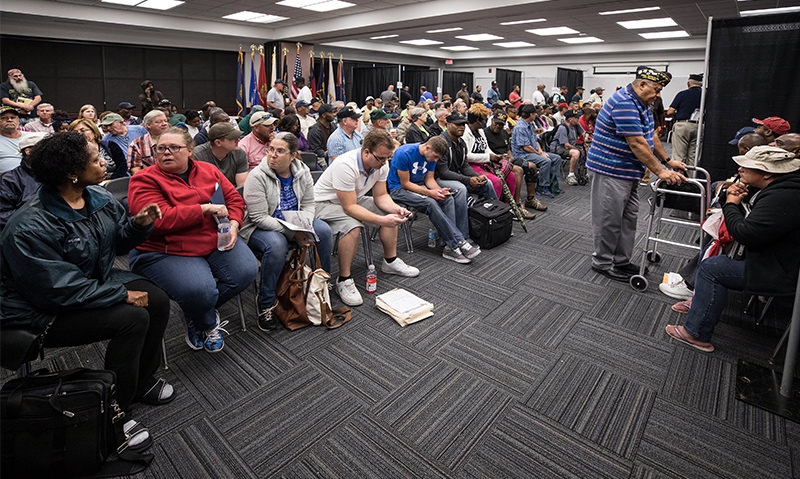 Marc Stratton was running out of options.

The U.S. Army retiree was suffering various symptoms, including sleeplessness, when his wife urged him to get checked for PTSD. He didn’t want to because he was “embarrassed,” but he did so anyway. Then his wife told him she wanted him to get evaluated beyond that. “She told me ‘I want you back the way you were,’” said Stratton, whose military career included multiple tours in the Middle East.

Searching for options and frustrated by what he called a lack of consistency with the Department of Veterans Affairs, Stratton was contacted by his cousin, Terrance, a fellow Army retiree. Terrance suggested Marc come from Phoenix to The American Legion’s Veterans Experience Action Center (VEAC) in Cary, N.C., Sept. 14-16.

Marc said Terrance told him a similar center conducted by the Legion previously was “’the real deal.’ He said ‘I don’t know anyone who went there who didn’t feel good when they left.’”

Count Marc as one of the center’s satisfied customers. After flying from Phoenix to Norfolk, Va., to meet his cousin – a resident of Salisbury, Md. – the pair got in line for the center at 9:45 p.m. on Sept. 13, a little less than 12 hours before the center opened.

“I found today that I actually have service-connected claims that I didn’t know about and never would have known about,” Marc said. “The gentleman who helped me helped me go through all my documents. He saw things I did not see.

“I’m leaving here today feeling confident I’m going to get the help that I need. If that’s compensation, so be it. But the first thing I want to know is what’s wrong. I want to know what’s going on, because money’s not going to fix that.”

Marc was one of 1,025 veterans who visited the Herbert Young Community Center in Cary over the three-day period. American Legion Post 67 volunteers joined volunteers from the Veterans of Foreign Wars and other veterans service organizations, veterans service officers from all over the state, and VA staff from the Veterans Health Administration, Veterans Benefits Administration and the Vet Center program. Veterans could check on the status of pending VA claims and file new ones on the spot. Some received VA disability ratings while at the center.

Post 67 had staged a similar VEAC in September 2016 and had more than 600 veterans attend and resulted in more than $400,000 in VA benefits being paid out. Other VEACs, which started in North Carolina in 2015 under former Department of North Carolina Service Officer Cajun Comeau, had resulted in $3.2 million in benefits for veterans seeking assistance.

“It exceeded my expectations,” said Post 67 Service Officer Richard Spyrison, the VEAC’s organizer. “I figured maybe 800. I did not anticipate the numbers we ended up with.”

But Spyrison wasn’t totally shocked by the number of veterans who sought help at the center. “North Carolina’s got one of the highest populations of veterans and active-duty people,” he said. “Its veterans need help. They need guidance. They need the one-on-one experience with VA. The VA people that are here are excited. They had smiles on their face. We’re doing good work.

"We’re not satisfying everybody – there’s no way we can – but they’re doing good. They’re giving these veterans the information they need.”

Spyrison said he and Post 67 began planning for this year’s VEAC in January and likely will start doing so again in a few months for the 2018 center. “We learned from last year,” he said. “Everything we learned last year we tweaked and we built and we changed it. I’ve got the commitment from VA for next year. I’ve got the commitment from the Town of Cary for next year.”

Post 67 Commander Shelton Faircloth, 44, said that the turnout at the VEAC showed how much of a need there is for an event where veterans can get VA help. “They’re seeking out this type of event to have their voices heard,” he said. “Having 1,000 people show up in a three-day period sounds like there’s a lot of voices that need to be heard … across the veteran population as a whole.”

The center and its success stories also reinforced the reason Faircloth, who spent 21 years in the U.S. Army, became a part of Post 67. “It speaks volumes as to why I joined the Legion in the first place,” he said. “I felt I still had a purpose and a need to serve. Even though I can’t wear the uniform any more, I can still serve in a different capacity. Hearing stories like that makes me feel that what we’re doing makes a difference in someone’s life.”

Marc said the Legion hosting the VEAC speaks volumes about the organization and its mission. “It says that ‘we care, all the time. We always care,” he said. “And they’re taking responsibility for helping out our brothers and sisters.”

Marc was just one of the hundreds of success stories from the VEAC.

• John Powell, who served in the Army from 1991-99, including a deployment to Somalia, had a pending appeal on a disability rating increase request. A father of three, his rating was increased to 90 percent; after filling out information for a PTSD claim, he was told it would be bumped up to 100 percent after the claim is processed – an increase of more than $2,000 a month in compensation. “I think it will give me a little bit of breathing room,” Powell said. “I was paying out of pocket because I was getting frustrated. That was really hindering on my wallet. Coming in here I didn’t expect anything. Hearing that from them and seeing the smile on (VA staffer) face, you could see he was happy to help (me).”

• James B. Gardner, Kenly, a Vietnam War Army veteran whose previous claim had been denied, said he found out what needed to do to appeal the decision and also had a PTSD screening appointment set up during his visit. “I’m glad I took the time to come up here,” he said. “I need to come up here and talk to someone person to person. I’d rather talk person to person than talk on the phone anytime.

• Connie Johnson, who served in the Army from 1985-97, received valuable advice. “The gentleman who assisted me gave me some information that I never thought to put in my record,” she said. “He told me how to go about it and who I need to see to get the fact-finding started. Now I can go forward with the VA.”

• Victor Montgomery, who served in the Army from 1981-1991, has been dealing with flat feet for 32 years. He was seeking an increase in his VA disability rating and saw it go up 20 percent after his visit to the VEAC. “I’m very happy that I came here today to get that done,” he said of the rating increase and ensuing additional monthly benefit. “It’s going to be a good little bit of change. I would definitely recommend this to other veterans. When (veterans) come here, people are talking to them. It gives them a better understanding. It gives them knowledge about how to get the help that they need.”

• Randy Parker spent more than 20 years in the Air Force and Air Force Reserve. He came to the VEAC seeking a higher disability rating. “I was able to get a little bit of ‘behind the scenes knowledge,’ so to speak, and some advice straight from the horse’s mouth: How to file, what to file, what not to file to keep from losing what you already have,” he said. Parker was also briefed on Individual Unemployability and found out he was eligible for it; he filed the paperwork while at the center. “It was worth the wait, to be honest with you,” he said. “These guys did a great job.

• Jose Antonio Vazquez, a 50-year member of Post 56 in Puerto Rico and World War II Army veteran, came to the center to file a claim for service-connected conditions. Coming to the center was “was very necessary and valuable,” he said.

• U.S. Marine Corps veteran William Boseman was able to get a claim filed that he said he was told would be reviewed in a week. He was accompanied at the center by his friend Angela Lewis. “This is a wonderful, wonderful thing that they’re doing,” Lewis said. “A lot of people who need to file claims may not be able to for whatever reason. To have this place and to be able to talk to someone face to face is priceless.”

Veterans weren’t the only ones smiling. Although the center’s posted hours were 9 a.m.-3 p.m. the first two days and 9 a.m.-2 p.m. the final day, VA staff stayed until almost 8 p.m. the first night, 10 p.m. the second night and 7 p.m. the final night. Everyone who came to the center was able to see someone from VA or a service officer over the three days.

Moses Gloria, Veterans Outreach Specialist for VA’s Vet Center in Raleigh, worked at the center all three days, sort of serving as an air traffic controller while moving veterans from the waiting room inside the center to a one-on-one meeting with VA staff.

“What’s important is that raters and adjudicators, when they’re back in their office, sometimes they don’t put the connection between the paperwork and the veteran,” Gloria said. “Having the ability to have face-time with a veteran improves morale for our VBA employees, and the same with our VHA and Vet Center (employees). By doing this event and having us sit across from another veteran … instead of looking electronically on a computer screen at over 1,000 pages of medical documentation, they can easily reference the veteran’s experience … and look up stuff that might be overlooked.”

Jim Prosser – North Carolina’s Assistant Secretary for Veterans Affairs and a retired Air Force first sergeant and former veterans service officer – said having veterans and VA staff in the same place at the same time makes a difference for the veterans.

“It’s a lot harder for the VA to turn somebody down when they’re looking them straight in the eye,” Prosser said. “It’s easier to say ‘let me look at this’ than it is to say ‘no.’ When they see the actual effect on that (veteran), it gives them a different perspective. They enjoy coming to these things. They really want to help the veterans.”

Comeau, now a VA veterans experience officer and North Carolina field consultant, stopped by the VEAC all three days, praised current American Legion Executive Director and former Veterans Affairs & Rehabilitation Division director Verna Jones for coming up with the idea of veterans crisis centers after the VA scandal broke in 2014. Comeau used those as a model for his centers in North Carolina and is happy to see them continuing after he left the Legion.

“Anything that you can create that has a positive impact on the veterans community, and it endures past you, that’s what all of us should aspire to,” Comeau said. “To me that’s everything.”

For Spyrison, seeing the smiles on the faces of veterans as they left the center “makes me feel all the work we do pays off. I’m in a position (where) I don’t need the VA. I didn’t have an issue in my 20 years in the service.

“If we don’t, as a veterans organization, step up and help these folks … nothing’s going to get accomplished. We’re making some headway. We’re helping some folks.”