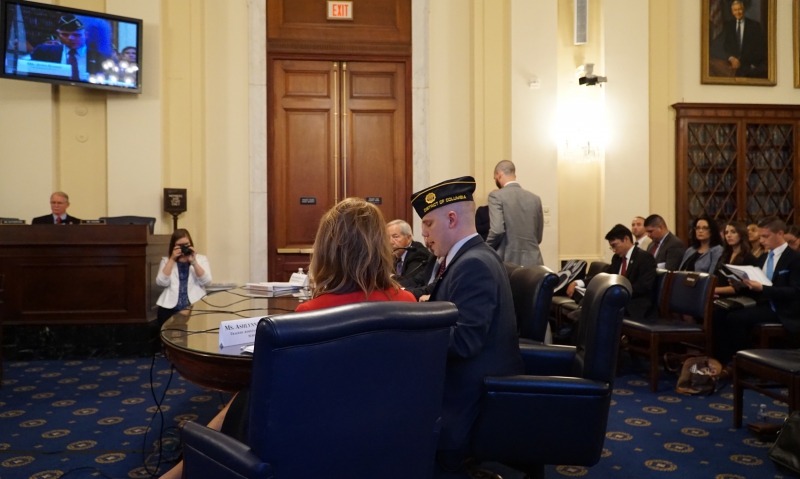 Kamin said that since the enactment of the Post-9/11 G.I. Bill, veteran and dependent beneficiaries have been subject, on occasion, to payment delays. As a result of either slow processing at the Department of Veterans Affairs (VA), mistakes or tardiness by school-certifying officials, some schools have put beneficiary accounts on hold or forced them to initiate payment of tuition and fees through student loans until payment from the VA is received.

“On a personal note, I remember a late VA payment when I was in school, leading to questions about whether I could still attend my classes,” said Kamin. “My student veterans’ organization at the time, (American University) AU Vets, was able to successfully lobby our institution to update their internal policies to allow myself and other veterans to continue to attend classes.

“But (the Tragedy Assistance Program for Survivors) TAPS deserves credit for championing this bill by recognizing that this should not fall to student veterans to lobby for; it should be mandated by principle.”

By Resolution No. 318, Kamin said The American Legion supports any legislative proposal including H.R. 4830 that improves education benefits so servicemembers, veterans and their families can maximize its usage.

“This bill would require schools to adopt policies that disallow them from imposing late fees or other penalties to beneficiaries due to late payments from VA,” Kamin said. “The American Legion applauds Congressman (Gus) Bilirakis for addressing this important issue.”

According to Kamin, among the range of benefits that this country has developed to provide transition assistance to disabled veterans has been to set aside contract benefits for companies considered service-disabled veteran-owned small businesses (SDVOSBs). The 2017 National Defense Authorization Act (NDAA) makes some important adjustments to the criteria for ownership and control of SDVOSBs.

NDAA specifies that a veteran with a permanent and severe disability need not personally manage the company on a day-to-day basis and, under limited circumstances, permits a surviving spouse to continue to operate the company as an SDVOSB.

In addition, Kamin said surviving spouses must also retain ownership of at least 51 percent of the company for the duration of the time that they claim SDVOSB status.

“The 2017 NDAA specified a surviving spouse may continue to operate a company as an SDVOSB when veterans die under certain conditions, such as that they had a disability rated as 100 percent disabled,” Kamin said. “H.R. 5044 would expand this criteria to give surviving spouses, with less than total disability rating, the option of maintaining SDVOSB status for three years.”

By Resolution No. 151, Kamin said the Legion supports H.R. 5044 as a measure to improve and increase benefits bequeathed to veterans’ spouses upon a veteran entrepreneur’s death.

Kamin said the goal of the Department of Labor’s Transition Assistance Program (TAP) is to ease the adjustment of separating servicemembers during the difficult transition from active duty to civilian life by offering job search assistance, medical/health services, advice on available benefits and other related counseling services.

The American Legion strongly believes that TAP represents an important step toward providing transitioning servicemembers with the information that they need to become successful and productive members of society, once they complete their military service.

“This bill would provide a new five-year pilot program and establish 50 centers across the country to expand access to job resources, and also ensure the Department of Labor provides classes with job-training information,” said Kamin. “The American Legion supports this bill, but would be remiss not to share concerns on VA’s TAP obligations.

“In last week’s budget testimony, the acting deputy undersecretary for benefits shared that the 2019 budget request cut $59.3 million from the (Vocational Rehabilitation and Employment) VR&E program due to favorable pricing of a TAP contract. Notwithstanding the question of how precipitous of a drop this actually is, we were under the presumption that TAP had been moved to the Benefit Administration Services, not VR&E. We would appreciate clarification from the VA.”

In 2012, Kamin said the Legion helped push for expansion of TAP to those servicemembers who had already separated from the military. In response, Congress passed the Dignified Burial and Other Veterans’ Benefits Improvement Act of 2012.

Provisions in that act authorized an Off-Base Transition Training (OBTT) pilot program that would extend the TAP programs to veterans and their spouses in a community-based setting. The law required the pilot program to be established by the labor department in a minimum of three states with selection favoring states with high rates of unemployment among veterans, according to Kamin.

“Programs designed to empower veterans’ abilities will not reach their full potential under the aegis of an administration dedicated to documenting veterans’ disabilities,” Kamin said. “And if we’ve learned one thing from all of our discussions over the past term, it’s that these programs have the potential to be so much more than benefits. With proper oversight, they can be true investments in the future of our country.”

By Resolution No. 70, Kamin said The American Legion supports legislation such as H.R. 4835 that will help improve TAP.

Watch a video recording of the hearing here.